Haunted New Hampshire — like most of New England — features hundreds (and perhaps thousands) of ghosts.

Here are some of my own favorite NH ghost stories (from 1995 to the present) and fascinating folklore from others.

My articles about ghosts along coastal NH:

I haven’t tested this cemetery for EMF, but even in daylight, this is one of the eeriest New England cemeteries I’ve ever visited. The cemetery’s “ghost stories” may have been created by students. Locals swear that it’s all nonsense. However, this site is well worth a daytime visit. 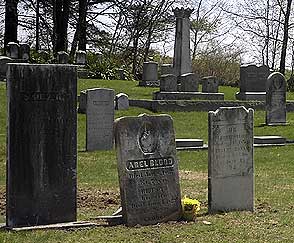 Take Exit 6 (Rte. 130) from Rte. 3, go west to Nartoff Rd., and then travel north on Nartoff (which jogs right and then left) to reach this very haunted cemetery. Locals call it “Blood Cemetery” for its most famous ghost, Abel Blood, whose headstone reportedly changes at night so the finger on the stone points downward instead of heavenward. Pine Hill cemetery is closed dusk to dawn; the police patrol steadily, especially around Halloween.

For many more pages about this eerie graveyard, read about the Ghosts of Blood Cemetery, Hollis, NH.

This is one “haunted” site that produces reliable needle-swings on the compass, day or night. I recommend visiting this lovely old cemetery during the daytime.

If you’re sensitive to psychic energy, you’ll feel something approaching in the woods, starting shortly before noon each day. The Gilson Road area was reportedly the site of several vicious battles among Native American tribes from as far away as Maine and Connecticut.

If you get lost, look for signs to Tanglewood Estates, the subdivision directly across the street from the cemetery. (It’s about 3.7 miles from the Rte. 3 intersection, to Gilson Road.) After you leave Main Dunstable Road, the cemetery is about 1/3 mile ahead on your right, behind a stone wall.

You can also reach the cemetery from Exit 5, off Rte. 3, if you approach it from the other end of Gilson Road. Or from Rte. 111 if you’re coming from downtown Nashua. Check this with an up-to-date map.

The cemetery is posted against vandalism, and patrolled by the police due to drinking parties in the woods behind the cemetery. The neighbors are also protective of this lovely old graveyard.

Then, a ghost followed one of the Tyng men, from house to house, until she killed him.

Even today, the Tyng family cemetery is supposed to be haunted.

A gentleman ghost with a hat appears at the main building of this college. He has been seen by many people — including me, in broad daylight — and by others — day & night — for many years.

Read my two-part first-person story at Ghosts of Colby-Sawyer College.

Also see my report about a haunted cemetery in nearby Andover, NH, above.

The basement of the old section of this wonderful church has a few areas which seem haunted. Most notably, there is an old wooden staircase that is haunted by the ghost of a male.

There is a slight cold spot in front of the doors marked “not storage.” Pendulum activity suggests that it is haunted by a ghost that is guarding something there.

Finally, there seem to be two portal-type energy-openings: One is in an unfinished area with many stones on the floor; compasses in this area swing erratically, and digital photos produced orbs. The corresponding (exit?) portal seems to be in a small, closed room that is set up for sitting on the floor, with signs indicating a reading area, a writing/journal area, and so on.This seems to be an active haunting and affects some people more than others.

Now a restaurant, this house–actually two Early American buildings combined–may be haunted by the ghost of Elizabeth Ford, who was murdered with her baby by her jealous sea captain husband. This ghost moves things, mostly in poltergeist style, such as making patrons’ dishes move and causing cups and saucers to fly across the room.

The ghost has also made appearances, most often at a window of the barn section, where she is seen gazing back at the tree where at least one victim may have been buried.

She is usually described as being about 5’7″ with a white gown and long white hair, and she is usually opaque, not transparent.

Other phenomena have occurred in what is reportedly one of the most haunted rooms in the restaurant: the ladies’ rest room downstairs.

We have investigated this restaurant and it is profoundly haunted by a sweet, slender woman in Colonial garb. She has long blonde hair (not white, as earlier reported) and a sense of humor. She is somewhat shy, but she’ll still play pranks if there is an opportunity to startle you.

I filmed an episode of “Chronicle” (New England TV series) at the Country Tavern and the ghosts were very obliging.  They kept blinking the lights on and off while the cameras were on, and we couldn’t replicate the effect, no matter what we tried.

More information is in the 24 Jul 1988 article by Joann Goslin in The Nashua Telegraph and in Norm Gauthier’s guide to more New Hampshire “haunted” places you can visit!

Among my favorite New Hampshire haunts, the Spalding Inn has unusual phenomena. Ghost Hunters stars Jason Hawes and Grant Wilson, and their families, once owned the hotel.

See my articles about the hotel’s ghosts, at this website.

The Blue Lady grave is towards the back of the cemetery, on the right (NNW) side. I’ve had more first-person stories about this ghost, than any other in this part of New England.

8/01: Vale End is now closed from 7 p.m. to 7 a.m. We’ve advised against visiting the cemetery, and this new curfew makes it even more foolish to visit Vale End at night.

3/06: After many years of keeping silent about what happened at Vale End, I’ve restored them to this website. My silence hasn’t kept people away; perhaps my true stories will prevent foolhardy ghost hunters from risking their lives at Vale End.

Several sources have reported ghosts at the “Ocean-Born Mary house.” The house — a private residence — may be haunted, but Ocean-Born Mary never lived there.

You can choose to believe the charming legend, or read our personally researched disappointing facts behind the tale.

On the other hand, her grave is in a wonderfully eerie, haunted cemetery in the middle of town. It’s well worth a visit if you’re in the area. For a surprising encounter with very obvious activity, check the Franklin Historical Society on Webster Place in Franklin.

While you’re there, wander down the dirt road to the Webster family cemetery, too.  (Yes, that’s Daniel Webster’s family.)

The site was where both Natives and settlers met in a couple of bloody attacks. But that’s not all. There’s the awkward history of the orphanage, plus the ghostly nuns that still haunt at least one building.

Read my story about the Franklin Historical Society’s ghosts.

Others’ stories of NH ghosts:

Derryfield
Historian Eva Speare reported that the early Scotch-Irish settlers in Derryfield believed in a faerie named Neto. Neto was responsible for the safe passage of Hannah Dustin and the boy captured by Indians, when the pair escaped and returned to their homes. Neto prevented another settler, John Stark, from being harmed by bullets.

East Kingston – 47 Depot Rd. (Rte. 107)
Someone has been closing the doors, turning the lights on & off when no one is at home, and rattling pans in this house. It may be the ghost of Eva Philbrick (d.1920) whose will specified that the house should never be sold at auction (it was, 1987), or the ghost of previous residents Arnold O’Brien or his mother, Edith.

Manchester – 915 Elm St., Bob Shaw’s Italian Sandwich Shop (formerly Psaris Bistro)
A popular restaurant with outstanding food, and a ghost that the previous owners called “Avery.” Mild poltergeist phenomena, plus classic ghostly events: Names called by no one, shadows flitting across the mirror, etc. Avery is a gregarious, cheerful ghost who wants attention now and then. Quietly say hello to him if you feel that he’s nearby.

Merrimack – The Common Man Restaurant (formerly Hannah Jacks’ Tavern)
A man in “old” clothes haunts the restaurant, and there’s an Indian spirit in the basement.

This town seems to have more ghosts per capita than most towns, dating back to Colonial times. Check the history of the town in The Meetinghouse Tragedy by Charles E. Clark, illustrations by John W. Hatch, UNH. (Thanks to reader, MH, for this info.)

Wilton – Laurel Hill area
A local investigator reported that a cemetery described as “across the street from Laurel Hill cemetery” is providing photographic anomalies at night. This visitor reports a purple streak in a videotape, similar to the image at our first purple streak photo. (Shown above, from Gilson Road Cemetery.)

Also, possible figure of a man by the side of the road, near the cemetery. (Thanks to ghost hunter, jb, for this info.)

Wolfeboro – Tuc’ Me Inn 118 Main St.
Haunted by a man, probably someone who lived there before it was the attractive B&B that it is now. A child has also been heard there. Sounds like a delightful place to stay, and listen to the ghosts. (As of late 2016, their website is gone. However, whatever is at that address… it may still have ghosts.)