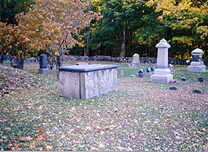 John Alford Tyng’s ghost may linger around his grave in the Tyng family cemetery.

It easy to find the cemetery, on Route 3A in Tyngsboro, adjoining Boston University’s Corporate Education Center.

When John Alford Tyng was dying, the ghost of his murdered wife, Judith Thompson, cursed him. She said that his headstone would be wiped clean and his name forgotten in history.

Judith’s curse worked. For years, John Alford Tyng’s name repeatedly vanished from his headstone, along with the date of his death, September 4th, 1775. Stone after stone was replaced on the grave, but each eroded quickly.

The problem was finally solved in recent years when the grave was restored yet again, this time for a town-wide celebration. They changed the date to June 24th 1771, perhaps when Judith and the children died. After all, that’s when John Alford Tyng began his own unavoidable journey towards a slow and terrible death.

His crypt is the raised grave shown in the photo above. There is no body in it. The headstone seems to remain intact. Perhaps Judith is happy with this different date.

Not far from John Alford Tyng’s grave, you can see the crypt of Edward Tyng. He came from England and bought the land that became Dunstable, and later Tyngsboro.

Edward’s grave also has a ghost, according to some legends. He may revisit the area that was supposed to be his legacy, but was overshadowed by his great-grandson’s tawdry story.

Or, the ghost may be John Alford Tyng’s, as he tries to make amends with the family that he disgraced.

Judith Thompson happily haunts her Nashua home. Today, it’s a private home in a residential neighborhood. The homeowners are happy to have her in their home, and she’s reportedly an excellent babysitter.

Some years ago, when the home was between owners, a young man had an opportunity to spend the night in it. Reflected in a mirror, he saw Judith Thompson in her green gown. He didn’t know anything about her story, but had the presence of mind to take out a tape recorder and ask her questions. For several hours, she told her tale. When morning approached, she vanished.

The young man immediately set out to learn more about the ghost, with just her name–she called herself something that sounded like “Judy”–and the people she’d talked about. He was able to identify her, and didn’t think much more about it.

Years later, he told the story of his ghostly interview to a friend, New England ghost researcher Brian Chabot. That’s how Hollow Hill learned about Judith Thompson and the many ghosts related to the Tyng family, their houses, and their family cemetery.

The tape recordings had been professionally analyzed, but were later stolen from the young man’s car. However, on subsequent interviews with Hollow Hill, his memories were very clear and precise. Based on his recollections, we continued researching Judith Thompson, John Alford Tyng, and the ghosts connected to them.

This same tale appeared in the Nashua Telegraph’s “Encore” magazine section on October 31, 2002. Since then, we’ve learned a few details which changed the story slightly from what was reported there by Holly Bedard.

Judith’s story has now been told, along with the life and death of her husband, John Alford Tyng. And, if her curse continues, he may never rest in peace.