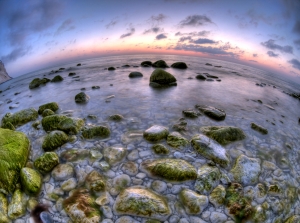 Haunted New Hampshire’s “Seacoast” region includes cities and towns that are on the coast, such as Portsmouth, Rye, and Hampton, NH.

The area features a mix of ghosts and hauntings, from Colonial times to the present. As you’d expect, many have a connection with the sea.

Portsmouth was settled in 1630 where the settlement was called “Strawbery Banke,” and by 1700, it was a major trading port.Over the next two centuries, Portsmouth became famous for building ships, and as an industrial center noted for its breweries and artisans in a variety of trades.From the mid-20th century to today, the city has grown to become one of the most popular tourist and shopping destinations on the Seacoast.
For a detailed list of Portsmouth ghosts, see my page about Haunted Portsmouth, New Hampshire

Eunice ‘Goody’ Cole
Eunice Cole was the first woman in Hampton to be charged with witchcraft. When she died, a stake was put through her heart, according to local lore. She was finally exonerated in 1938. Read our detailed report of her life, death, and hauntings, in a two-part article:
The ghost of ‘Goody’ Cole, Hampton, NH (Part One) and ‘Witch’ Goody Cole, a Hampton, NH ghost (Part Two).

Moulton residence
That’s one of the most haunted houses in NH, per author Eva Speare.

Odiorne Point State Park
on Rte. 1A just south of Portsmouth offers a variety of eerie ghost tales from shipwrecks (when it was called Rendezvous Point) to World War II military bunkers. Learn more of the site’s history at its comfortable visitors center.

Sandy Beach, just north of Wallis Sands, may be haunted by the ghosts of 21 colonists killed in the Brackett Massacre of 1691. The late September anniversary is the best time to look for evidence of their ghosts. Anthony Brackett may be buried in an unmarked grave on nearby Brackett Road.

Little Harbor, not far from Odiorne Point, was the site of a late 17th century Indian massacre. 14 farmers were killed there. Both the farmers and the Indians–who left their plunder behind at Breakfast Hill when they were surprised by armed colonists–may haunt the area.

Farragut Hotel – Just west of the site of the old Farragut Hotel, on Central Road by Ocean Blvd (Rte. 1A), at least one ghost haunts where the old hotel’s gift shop used to be. Another ghost may appear at the site of the hotel’s theatre, which was used as a rehearsal hall by performers such as Liberace in the 20th century. The hall was a small yellow building just feet west of the swimming pool, across Central Road from the hotel. Listen for faint, ghostly piano music late at night.

GHOSTS OF THE ISLES OF SHOALS

The Isles of Shoals are ten miles off the coast of Portsmouth. On a clear day, you can see them from Rte. 1A between Hampton and Newcastle. Of the 18 islands reported by early explorers, nine islands make up the famous (but tiny) Isles of Shoals. There are no camping facilities on the islands. The only hotel is on Star Island. There are many spirits haunting the Isles of Shoals, and a wealth of ghost stories. See our report, Ghosts of the Isles of Shoals