Old Center Cemetery in Andover, NH is about 25 miles from New London, where Colby-Sawyer College is known for its fine education…. and its ghosts.

One of the most-reported tales is about a woman with long hair. She wears a long, full gown which seems to billow even when there is no wind.If you stop for a closer look, she’ll beckon you to join her in the cemetery. Sometimes she waves with just her right arm, and sometimes it’s a broader, more ghostly gesture with both arms.She’s at the far left corner of the cemetery (if you’re looking from the street) and only appears if you’re outside the cemetery walls.She appears only at night, and is seen as a flickering outline. She’s not easy to see, with so many trees around her. If you try to enter the cemetery (not recommended after dusk), she vanishes.

A second story involves a young man buried outside the cemetery walls.

In colonial times, Ben Hargrove made a pact with the Devil, or so his neighbors said. Things came “too easy” to him, and while people wanted to like him, there was something about him that made them nervous.

One night, a neighbor thought that he saw flames coming from Ben’s home. On closer inspection, the house wasn’t on fire, but a vivid red-orange light seemed to emanate from every window of the house. Peering through a window, the neighbor saw Ben signing a document while the Devil watched.

Soon after this, Ben dressed in his best clothes and went to Boston to indulge in some backroom gambling. He returned within days, badly shaken and dangerously ill.

One night about a week later, Ben appeared just as a town meeting was breaking up. He approached neighbor after neighbor, asking to take refuge in their homes.One after another, they refused. There was something especially odd about Ben Hargrove that night, and it chilled them.

Suddenly, Ben looked up, just over the heads of his neighbors, with a look of unspeakable horror on his face.

Ben turned on his heel and ran towards the church. But, as soon as he passed the gate and stepped onto the church’s property, he let out a terrible wail… and vanished.

Some say that he turned instantly to ashes and that’s what they buried. Others say that his body was found in his home the next morning, but it was cold and rigid as if he’d been dead for several days.

But, whatever was left of Ben Hargrove, he was buried outside the cemetery walls in an unmarked grave.

His ghost appears regularly outside Old Center Cemetery, usually near the road. Sometimes he tries to flag down passing cars, but usually he simply cowers and quickly disappears.

Most local residents insist that these kinds of stories are nonsense. And, they’re probably right.

Even if the tales are entirely made-up, we can recommend only daytime visits to this eerie cemetery in rural New Hampshire.

From the road, Old Center Cemetery seems a well-kept graveyard. It is bordered by a classic New England stone wall. The cemetery welcomes you with a pristine white gated entrance, just like many other wonderful New Hampshire cemeteries.

However, once you’re inside the cemetery walls, you’ll see a very different scene.

Much of the cemetery’s soil is very fine sand. It’s soft enough that more than half the gravestones seem to tilt in various directions.

Even more disturbing, when you walk through the cemetery, your feet may sink into the graves. Don’t wear heels, and open sandals may fill with sand. If you sink more than an inch or two, it’s difficult to extract yourself from the grip of this graveyard.

The most surreal scenes in this strange cemetery are the graves that are very old, but look recently dug. The photo at right shows one of them.

The sandy soil probably doesn’t have the nutrients to support grass or groundcover. These gravesites look weird, but it’s unlikely that these graves actually harbor vampires.

Nevertheless, this cemetery is one of the creepiest we’ve ever visited, even during the day. We cannot recommend going there after dark. The cemetery is probably posted to prevent after-dusk visitors anyway. We didn’t return there at night. 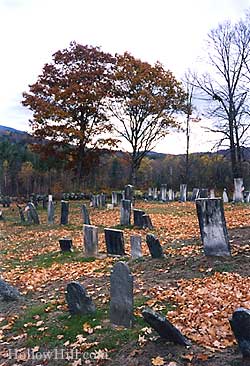 For other ghost stories of central New Hampshire, see: