“Ocean-Born Mary” is among America’s most famous ghosts. Here’s her popular legend, researched in Henniker, New Hampshire by Fiona Broome. (If you’re busy, you can listen to Fiona’s recording of the story. It’s about eight minutes long.)

Ocean-Born Mary is one of America’s most famous ghosts, and she was an actual person with a real history. Her ghost stories are credible, as well. In this 8-minute recording, hear Fiona Broome describe the ghost’s past, and what to look for to encounter her ghost. 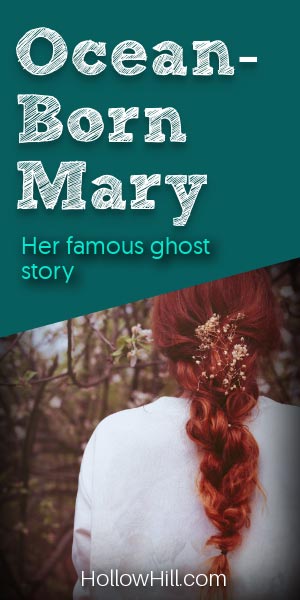 Ocean-Born Mary’s story begins just off the coast of old New England. Her story includes adventure, romance, and – of course – a classic ghost or two. Here’s what I discovered in my research in the town of Henniker, at its public library, and during a visit to Mary’s grave.

Mary Wilson was born at sea on July 17th, 1720 (according to the old calendar), soon after her parents set sail from Londonderry, Ireland, aboard the ship, the Wolf.

As the ship neared Boston harbor, it was boarded by pirates, led by the ruthless – but very young and handsome – Don Pedro.

Don Pedro learned that there was a newborn aboard, and offered to let the ship and its passengers continue their voyage, unharmed, if the Wilsons would name the baby “Mary,” after his beloved mother.

The Wilsons eagerly agreed, so Don Pedro honored his promise and let them continue to Boston.

However, before his own ship of ruthless (and now unhappy) pirates sailed away, Don Pedro returned to the Wolf with a length of Chinese silk. He told the Wilsons that the fabric should one day be used for Mary’s wedding gown.

So, many years later – just before Christmas in 1742 – when Mary and Scotsman Thomas Wallace married, in Londonderry, New Hampshire, her wedding gown was made from that silk. (You can see a piece from it at the Henniker Public Library, and a larger piece in a museum in Washington, D.C.)

Mary and Thomas Wallace had a happy marriage, and their family quickly grew to include a daughter and four sons.

Sadly, Mary was widowed soon after the birth of her last son.

Word of the tragedy reached Don Pedro. Though he was still a relatively young man, he was eager to settle far from the call of the sea. During his career as a pirate, he’d earned – and saved – a fortune.

He ordered his men to row up the Contoocook River to the 6,000 acres of land he’d been granted by the King of England.

Apparently, “Don Pedro” was actually an English nobleman, previously the “black sheep” of the family, but now his wandering days were over.

Don Pedro had his ship’s carpenter build a fine mansion on a hilltop in what is now known as Henniker, New Hampshire. Even today, the house is known for its beams and detailing. They’re uniquely like a ship.

When the house was completed, Don Pedro went to Londonderry and begged Mary to live with him – as his housekeeper, since she still mourned her late husband. According to local legend, Don Pedro supported Mary and her children in grand style for many happy years.

However, the fortune that Don Pedro had earned was also the cause of his death. One night, men came to the Henniker mansion under the pretense of visiting with their old friend, Don Pedro.

Mary and her children went to bed, unaware that tragedy would soon strike.

Mary heard a curse from outside her window, and then a groan. Recognizing the voice of Don Pedro, she rushed to the garden and found him alone, dying with a pirate’s cutlass in his chest.

Before he died, he told Mary where he’d hidden his gold. Then, he asked her to bury him beneath the hearth in the home they’d shared so happily.

She honored his wishes. After that, Mary lived a long and comfortable life, never leaving the Henniker home. Don Pedro’s fortune had been so large, Mary left most of it where he’d hidden it.  According to stories, it’s still somewhere on the property. (But, before you grab a metal detector and start looking for the treasure, remember this: Don Pedro’s land grant was 6,000 acres. The gold and jewels could be almost anywhere around Henniker.)

One of Mary’s hobbies was painting, and the American eagle and stars she painted over the front door of the home, can still be seen there today. Inside, her landscape murals decorate many rooms in the home.

After her death in 1814, her spirit remained in the house, as a “green lady” ghost. That is, she protects the home and the people in it.

In the early 20th century, the home was opened to the public. Visitors often saw her rocking chair sway gently as she let them know she welcomed them.

Mary has been sensed near the hearth she tended carefully, after it became the final resting spot of Don Pedro.

In more recent years, two NH state policemen saw her one night, crossing the road in front of her house.

Hans Holzer, the famous ghost expert, has conducted two different (and apparently successful) seances to contact Mary. As recently as 1963, Mary helped put out a blazing fire in the house, while the owners watched in amazement.

On many Halloween nights, Mary rises from her grave in Henniker’s Centre Cemetery (twelve rows back from the front gate, and marked with a special plaque), and rides a magnificent horse-drawn coach to her home. (Her grave is shown in the photo, below.)

Many people have seen Mary’s ghost. They always comment on her red hair, green eyes, and magnificent stature, at about six feet tall.

Even as a ghost, she’s an astonishingly beautiful woman. Her home is  privately owned and definitely NOT open to visitors. Please respect the owners’ privacy.

Ocean-Born Mary remains one of America’s most famous and beloved ghosts. Many people around Henniker will tell you about their encounters with her, especially around Halloween.

That is the legend, and it is a wonderful story. Unfortunately, only half of it is true.

If you want to know more about the real Ocean-Born Mary, read The Truth about Ocean-Born Mary’s Ghost. It is not nearly as romantic as the ghost story, but it’s still fascinating.

One thought on “Ocean-Born Mary – Her Ghost in Henniker, NH”