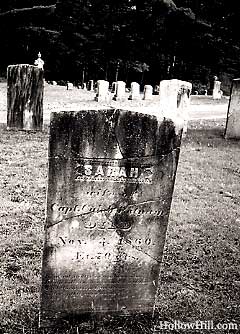 I used to laugh at this idea.

In November 1999, our research focused on haunted Gilson Road Cemetery.

I wrote the following report in 2000:

One night when our team was at Gilson Road Cemetery for an investigation, one of our photographers – Noreen, my closest personal friend – brought her teenaged daughter, Alice, with her.

We had a mixed group that night, including believers and skeptics, new researchers and experienced ghost hunters. A few teens were with us.

The investigation went fairly well, with many manifestations and psychic experiences. It wasn’t especially scary. However, some people became frightened, including my friend’s daughter.

A side trip to ‘safe’ Vale End Cemetery

On their way home, Noreen and Alice stopped at Vale End Cemetery in Wilton, NH. According to Noreen, her plan was to take Alice to a comfortable, familiar cemetery near their home, so she’d feel better about the evening. Besides, Noreen wanted more photos.

They parked the car near the middle of the cemetery, as most of us do when we’re at Vale End. (Remember, this was 1999. From what I’ve heard, the parking area has been moved — or perhaps filled-in, for graves — in the past 10+ years.  I won’t be returning there to check it out.)

And, they strolled towards The Blue Lady‘s headstone. (That’s it, on the right.)

Noreen mentioned being near an attorney’s headstone (identified by the ‘Esq.’ notation on the marker), when something dark seemed to come up out of the ground. She couldn’t tell what it was.

Alice ran in terror back to the car. As Noreen described the scene, she said that something screamed through Alice.

They drove away in such haste, a branch took their outside mirror right off the car.

Some time later that night, Alice called me at home. Fortunately, I was still awake.

She was terrified, and asked if anything follows people home from cemeteries.

I assured her that no, nothing follows you home. If ghosts could leave where they were, they probably wouldn’t be haunting.

A victim of haunted Vale End?

Five days later, Noreen – Hollow Hill’s lead photographer – was found dead as she sat in her car in a busy parking lot in Wilton. Her death must have been sudden, or she’d have hit the horn on the car to get attention. Noreen was the epitome of common sense.  She was also a very physically fit woman, and younger than me.

The hospital declared it a heart attack, and I thought nothing more about the odd circumstances. Mostly, I missed my good friend.

Looking back, if I could have prevented them from visiting Vale End that night… I would have.  And, I wouldn’t have treated Alice’s concerns so lightly.

However, for several months after my friend Noreen’s death, I refused to believe that tragedy had anything to do with ghost hunting.

The following spring, some of us began keeping vigil at Vale End Cemetery, hoping to see the Blue Lady.

One night, four of us were at the cemetery, chatting. Nothing dramatic was going on, although I’d measured some significant EMF levels near the large evergreen just north of the Blue Lady grave.

We were about to call it a night as darkness fell, when I decided to stroll over to the Blue Lady’s headstone for some last-minute photos… just in case.

I was feet away from the attorney’s stone that Noreen had mentioned, when I spotted what I’ve since called ‘a little Grover guy’ about two or three feet from me. (Today, I might call him a little Elmo guy.)

He was short, between two and three feet tall. He looked like he was covered with fur, and disproportionately skinny like Grover.

I paused, startled, but decided to keep walking. After all, if the Grover guy – who was a vivid shade of red* – hadn’t bothered me yet, he probably wouldn’t. And, the figure seemed more amusing than anything to inspire fear.

Then, I walked into something like a force field from Star Trek.  It felt as if I’d hit a glass wall, but there wasn’t anything there.

My story continues at Fear at Vale End Cemetery.

*People have asked why I don’t describe him as “Elmo.” Well, Elmo wasn’t a popular Sesame Street character at that point. Also, Elmo doesn’t have the same distinctively long, skinny arms that Grover has. So, I describe the figure as a “red Grover guy.”