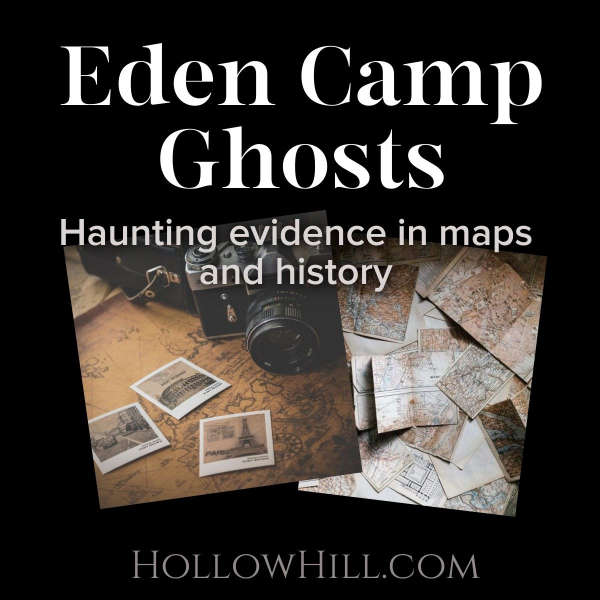 Eden Camp… is it really haunted?

If you’re like me, you want more than just a few ghost stories. A TV star claiming they felt chills… that’s not enough, either.

Knowing that Most Haunted was planning to investigate the site, I went looking for the kind of evidence that convinces me. 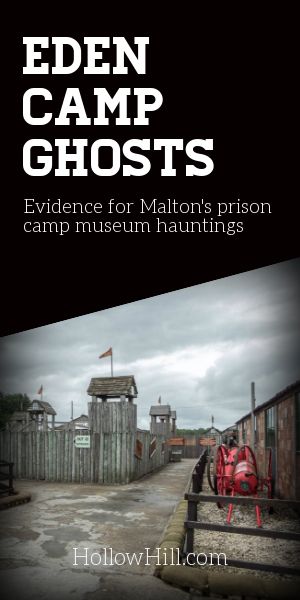 Within a few hours, I found evidence explaining why Malton (England) is likely to be haunted… perhaps very haunted.

(If you’re looking for insights about Most Haunted’s 2019 Eden Camp investigation, you may enjoy Eden Camp Ghosts – Where the Ghosts Make It Personal.)

Here’s where I looked and what I found within a few hours.

First, I looked for Eden Camp ghost stories, online, and found nothing credible.

That was a small red flag… but a very small one. Personally, I prefer to investigate sites that haven’t been visited by thousands of ghost hunters.

Even if the site is a tourist attraction by day, the ghostly energy can be fresher – easier to detect – if I’m among the first to investigate its ghosts. (That was true in the 1990s, when I was among the first to tour Edinburgh’s vaults.)

And, since Most Haunted was visiting the Eden Camp Museum – and found enough activity for two episodes – I wanted to know more.

With no convincing ghost stories to research, I looked for more tangible evidence. From my past locations work, I’ve learned to rely on ley lines.

I found several lines that include Eden Camp.

The following maps convinced me that something odd might be going on at Eden Camp.

(I don’t claim ley lines as “proof” of ghosts. They’re not. But, though some may raise an eyebrow, this kind of pre-investigation research has helped me find many off-the-beaten-path paranormal sites.)

The red line is the most reliable. It connects Eden Camp to Nunnington Hall, brushes by Kiplin Hall, and continues to Ravensworth Castle.

All of them have credible ghost stories.

If I widen the line by a mile or two – reasonable when the line covers so much distance (and maps aren’t 100% accurate) – haunted Barnard Castle is on this line, too. 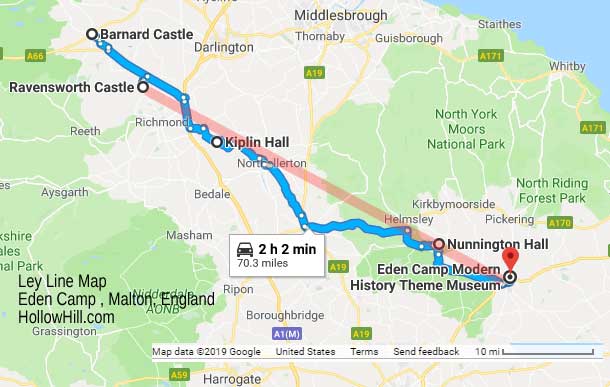 Another possible ley line intrigues me. It connects the Devil’s Arrows with Eden Camp and continues to Filey, an area with several noted, haunted locations.

I think the Devil’s Arrows are fascinating. They’re shown below.

Three (of five or more) standing stones form a line that extends through four Neolithic earthworks, Nunwick Henge, and the three Thornborough henges. (Per Nigel Pennick’s research in Leylines: Mysteries of the Ancient World.)

To me, that’s just plain weird, but – for now – I’m not applying any specific meaning to it. 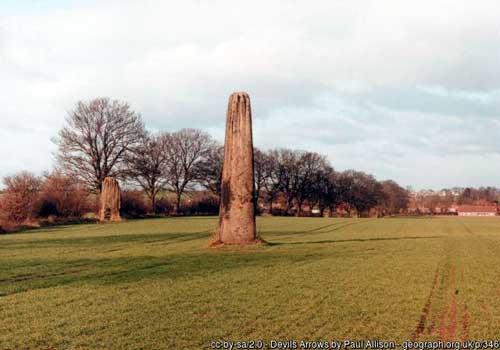 In addition, a Roman road connected the Eden Camp area with Filey, and those roads were among Watkins’ earliest ley line studies.

The longer the line, the more sites I should find, and they should be well-documented for paranormal research. Otherwise, I’ll dismiss the line altogether.

For now, the Eden Camp to Ravensworth Castle line was enough to justify further research into the POW camp.

Connections to Ghosts and Hauntings

Next, I studied the history of Eden Camp. I was looking for connections that usually indicate a haunting: money, power struggles, drama, and tragedy.

Almost every prisoner of war camp seems to be haunted.

In the US, I can think of many, including  – on the east coast – Rutland Prison Camp (MA); Elmira Civil War Prison Camp (NY), where 25% of the 2963 prisoners died;  and Point Lookout (MD), also known as Camp Hoffman, which held over 20,000 prisoners. That was double its maximum capacity.

In the western US and Midwest, I’ve heard creepy stories from Camp Douglas (IL), Camp Chase (OH) where at least 2,000 prisoners died, and a very haunted prison camp in Nephi (UT). Currently, the Nephi site is a men’s state correctional facility.

And, in the deep South, Andersonville and Fort McAllister – both in Georgia – are notorious for their ghosts.

So, the prison camp connection increases the likelihood that something haunts Eden Camp Museum.

The History of Eden Camp

Eden Camp was one of about 456 known British prisoner of war (POW) camps. Of them, only 11 remain with over 80% of their structures still standing. That makes Eden Camp extraordinary, and it’s why the museum has won at least two awards for excellence.

At the end of 1945, over 355,000 prisoners of war were in the UK. There wasn’t a single successful prisoner escape from Britain itself. (A Canadian escape was featured in the 1957 movie, The One That Got Away.)

At first, Eden Camp – also known as Camp 83 – was the home of about 250 Italian POWs, and perhaps some Italian immigrants and those with Italian parents or grandparents.

They helped to build the camp’s huts, and were the main residents between 1942 and 1943. 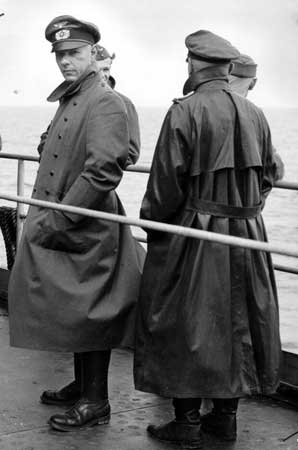 When German prisoners were brought to the UK, they were categorized as “white, grey, or black.” The white ones were non-Nazis, the greys were those considered dubious, and hardened Nazis (such as officers) were coded as blacks.

The more dangerous Nazis were imprisoned further north than the whites and greys.

That’s why most German officers were sent to POW camps in the Lake District and North Yorkshire… including Eden Camp.

Many of those officers remained in UK prison camps until 1948 or later, until they were shipped to Germany for war crimes trials.

After the war, Eden Camp became a home for displaced persons, then an agricultural holiday camp and Ministry of Agriculture depot.

In the 1950s, Malton Minerals used it to dry & store grain, followed in the 1970s when individuals sublet the huts as workshops.

In 1985, Stanley Johnson bought the site, intending to use it for a crisps (potato chips) manufacturing plant.

And that’s where the story turns really interesting.

Why is that important…?

It’s very odd. And, it tells me that other POWs – alive or dead – may want to revisit Eden Camp, too.

If I were looking for a good reason for Eden Camp Museum to have ghosts, that one is compelling.

So, in March 1987, Stan Johnson opened the site as Eden Camp Modern History Museum, “to honour the courage, fortitude, and sacrifice of the people who served in all walks of life during the Second World War, 1939 – 1945.”

The museum started as 10 huts. Then they restored six more, and it has expanded since then.  (The original camp had at least 33 huts.)

Visitors say you’ll need at least two or three hours to see all the exhibits… and that’s in daylight. If you’re investigating ghosts, especially after dark, plan a full overnight vigil, if the site opens to them. (Please, do not trespass and spoil it for the rest of us.)

In two additional articles, I’ll explain many other reasons ghosts may haunt the Eden Camp site and nearby Malton.

One of the main reasons (besides potential ley line energy) is a direct, physical connection with an ancient Roman camp, and – possibly –  a large Roman community. One of the camp’s names was Derventio Brigantum, and residences may have expanded to the nearby Eden Camp area. (The Romans were there for at least four centuries.)

Also, on the central part of the Roman camp, Malton Castle (two built on the site, actually) had a turbulent history involving politics, plots, feuds, and tragedies.

So, Eden Camp is likely to be haunted… and the east and northeast sides of Malton may have lurking ghosts, too.

Where to Start Research at Eden Camp Museum

(I wrote this before the Most Haunted episodes aired.)

I’d start with Hut 10, refurbished in 2002. It contains the world’s most comprehensive collection of POW artifacts.

If you believe in residual energy hauntings or haunted objects, Hut 10 seems certain to have some ghostly activity.

And then there are the other daily cues, churning up energy related to power struggles, drama, and tragedies of the war.

These quotes are from a 1994 Liverpool Echo article by Angela Candlin, “A weekend on the warpath!”

A weekend on the warpath! The Second World War as a tourist attraction oh, what a lovely idea…

This is as authentic as barbed wire, UXBs, and the smell of fear…

Shiver at the horrors of a U-boat attack and feel the goosepimples as a mother screams for help during the Blitz. The smell of burning, the thud of bombs lingers even inside the camp theatre hut with its “We’ll Meet Again” nostalgia.

I’m not sure I’ve ever read such a dramatic list of triggers likely to result in paranormal activity, ghosts, and… well, everything that happens at truly haunted sites.

Until I visit it, I can’t confirm that it has ghosts. However, at first glance, it has much to recommend it:

The more I research Malton and the area around Eden Camp Museum, the more weird history – and likely ghost stories – I find.

If I were closer to Malton, England, I’d visit Eden Camp today. Really, it sounds like a ghost hunter’s dream site.

If you’ve been there – or if you watch the Most Haunted Eden Camp episode – I hope you’ll share your thoughts in comments.

In my next article in this series, I’ll explain why Malton’s Roman history makes the area – including Eden Camp – even more interesting for paranormal research. [Link]