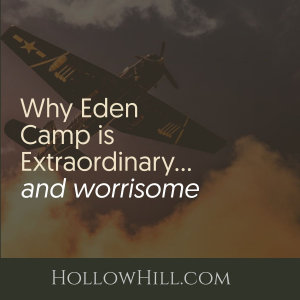 Q. What could give a professional ghost hunter chills, just watching TV?

A. When it goes far beyond the usual frights, and gets personal – even sinister – with the investigation team.

That’s what I saw when Most Haunted visited Eden Camp, and – in my review – you’ll learn why their investigation troubled me.

Most Haunted’s first Eden Camp episode (2019) showed viewers that Eden Camp has consistent, low-level activity. That – plus some of my own research – convinced me that Eden Camp was worth a visit.

In fact, when Eden Camp Museum is open for ghost vigils (evening or overnight investigations), I recommend it… but ONLY if you’re okay with real ghosts. 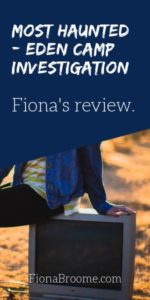 Well, in the first Most Haunted segment from Eden Camp, several things impressed me. I felt like the Bungalow – investigated by Karl and Stuart – was one of the stars of the show.

It was more than just a building. Something is in there, and I’m not sure what it is… but it seems able to get inside your thoughts.

The bungalow – where Karl Beattie and Stuart Torevell investigated – was a surprise.

It seemed the only location with an obvious, intelligent haunting.  That is, the spirit/s responded directly to what Karl and Stuart were saying.

The K-II responses, noises, and poltergeist-like activity were more reliable than most hauntings.

But, I was more interested in Stuart’s demeanor. For an experienced investigator, it seemed odd. And a little worrisome.

At times, he seemed deeply and personally concerned. To me, that personal connection practically shouted “active, sentient ghosts!”

For example, his facial expression was almost distressed when he said that – except that he was on an investigation – most people would run from that building and never look back.

(If he wasn’t aware of how distressed he seemed, someone needs to mention it to him.)

When a spirit makes an especially deep emotional impact on an investigator, that’s noteworthy.

If he returns there, I’d keep a close watch on Stuart at Eden Camp, because he may be more vulnerable than the other investigators.

I’d warn other investigators to protect their personal/emotional boundaries at Eden Camp, too. As we saw when something tried to separate Mary and Darren, a malicious entity might lurk at Eden Camp.

Also, in Most Haunted’s second Eden Camp segment, I hope someone returned to the bungalow kitchen, and they set up multiple cameras to capture poltergeist activity and noises there. The amount of energy there… that was fascinating.

In the bungalow, I think everyone was startled when the bicycle fell over. When it toppled a second time, though it had been carefully propped against the wall, that was especially odd. 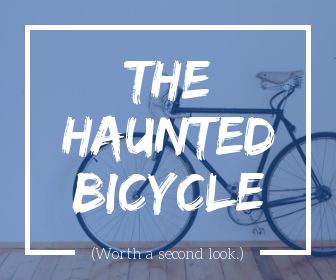 One reason the bicycle interests me is: it’s made of metal. From my research, metal objects – especially iron and steel – can hold considerable psychic energy.

Could a bicycle act as an antenna for EVP…? I have no idea. That seems a bit of a reach.

But – in this case – I’d definitely explore that possibility.

I’d also want to know if the bicycle belonged in the camp when POWs were there. Does the bicycle have residual energy from one person in particular?

In the second segment (airing 19 Jan 2019), I’m eager to see what the Most Haunted team discover in the cafeteria/dining hall. I was intrigued when Yvette Fielding and Glen Hunt commented that the cafeteria seemed “wrong.”

Since that room has a history of poltergeist-like activity – chairs moving, by themselves – that could be an interesting room to investigate.

Speaking of poltergeists, I think it’s brilliant to include new team member Mary, because she’s bright and thoughtful, and she seems to have nerves of steel, especially for someone new to these intense settings.

When two phenomena happened in opposite sides of the hut, Mary immediately realized the entity might be trying to separate team members from one another. 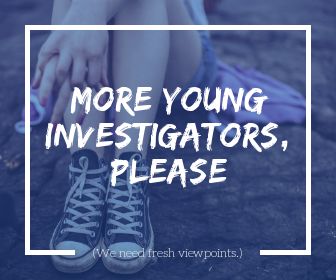 That was a very astute observation. And, in my opinion, it was accurate. I hope Mary continues to investigate with Most Haunted.

In addition, her age and gender could further fuel the energy used by poltergeists.

(From past studies, we know that women – especially teens  – are often connected with poltergeist activity.  Likewise, I’m sure gender was one reason that – at Eden Camp – Louise and Jenny saw the most startling, consistent poltergeist activity: the swinging door.)

An additional benefit to more young cast members like Mary is: the new generation of ghost hunters bring fresh viewpoints and attitudes.

As an “old timer,” I’m mindful of the importance of experience. But, if that’s all we needed, we’d have more insights about hauntings. And have a better grasp of what ghosts are.

I’ll admit that my own research – especially about the Romans – caused me to talk to the TV screen as I watched the first Eden Camp episode.

(And yes, I know that no one hears me when I talk to my TV. Nevertheless, I talk to the TV screen, saying what I would, had I been part of the investigation team.)

During the show, Yvette asked the ghosts “Are you German?” and “Are you Italian?” 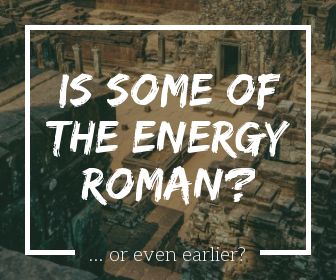 The only response she received was a negative one when she asked, “Are you English?”

That’s when I spoke to the TV screen insisting, “No, ask them if they’re Roman!”

To me, the singular response to the English question suggested Romans.

In my opinion, only the Romans would be vehement enough about the English to single out that nationality for a “no!” response.

But… maybe I’m reading too much into this. I tend to be very literal (and perhaps hyper-vigilant) when using real-time communications with ghosts.

And, to be fair, my own focus is a little narrow. After all, Yvette didn’t ask if the ghosts were Vikings or Norse, either.  And I haven’t researched their occupation of the Malton area, if there was any.

(Admittedly, I jumped on the Roman topic because York’s half-body ghosts have fascinated me. Vikings, etc…? Not so much.)

The Camp… or the Land Beneath It?

Seeing the wide range of low-level activity at the camp, I believe the land beneath the camp could be important. History suggests Roman occupation at the Eden Camp site.

That could explain why the ghosts said multiple people had died at the Eden Camp site. During Eden Camp’s POW years, only one person died there.

My guess is: those other deaths were Romans. Or other people who were on the Eden Camp property before it became a prisoner of war camp.

When you have widespread activity at a location, always consider the history of the property it’s on.

At Eden Camp, the team found evidence of:

The team did not seem to witness physical contact. No one was hit, pushed, or otherwise assaulted, even by thrown objects. So, I think physical danger is unlikely.

(I’m still concerned about the effects on Stuart, as well as the clever attempt to separate or isolate team members.)

Nevertheless, the extreme range of activity intrigues me. I’d like to know more about Eden Camp’s location – why it was placed there, and any known history of that particular site.  (For that, I might need local resources. Meanwhile, for additional articles at this website, I’m researching Eden Camp’s location with my personal library and the Internet.)

In the Eden Camp episode, I applaud Most Haunted for presenting a realistic, two-hour show.

Though Eden Camp is especially active, it was refreshing to see Most Haunted convey what real ghost hunts are like. I hope more ghost-related TV shows follow Most Haunted’s great example.

2 thoughts on “Why Eden Camp Is Extraordinary… and Worrisome”