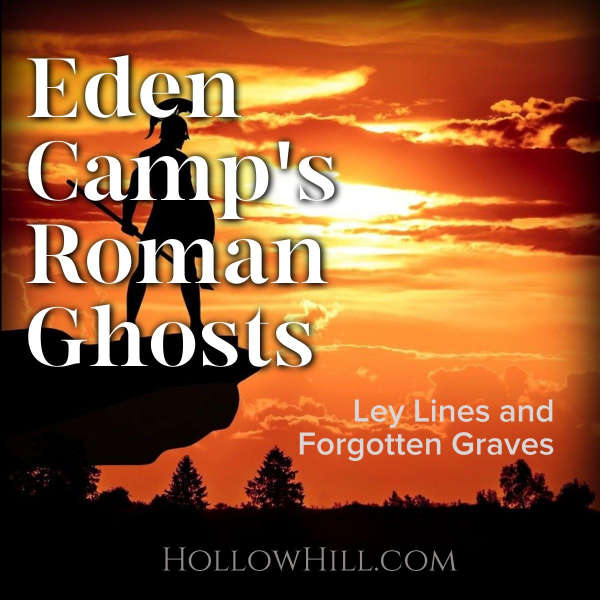 Do ghosts lure the living to recreate a world where the ghosts are most comfortable? Eden Camp may be a peek into the power plays of the past. 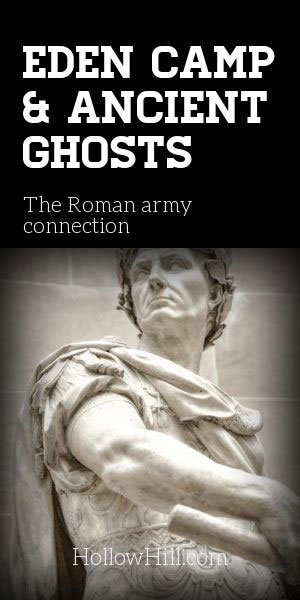 Eden Camp – in Malton, England – has at least a thousand reasons to be haunted: one ghost for every POW (mostly Nazi officers) who lived there between 1942 and 1948.

However, when looking at Eden Camp’s ghosts and at haunted sites in nearby Malton, the prison camp may be the tip of the iceberg.

Some of the area’s ghosts – or at least residual energy hauntings – probably date back to the 1st century.

The story starts with the Romans. And, from my research, if the Romans occupied a British site for more than a century… it’s haunted.

About two miles south of Eden Camp, the Romans built a camp and then a timber fort for troops. It was Derventio Brigantum,  built in the Flavian period (69 – 96 AD).

Ruins suggest an even earlier settlement beneath it.

The Romans occupied the area until the end of the 4th century. That means many Romans lived and died there. That’s a compelling reason to investigate Eden Camp and the Malton area.

Most hauntings seem to involve ghosts of famous people – like Anne Boleyn – or ghosts of people who lived between 1600 and the present day.

Of course, there are exceptions.

Roman ghosts are noteworthy, and their ghosts around York are legendary.

As far as I know, York (the city) is where people first reported Roman ghosts with only half a body… the upper half.

That’s not unusual among apparitions. People often see an upper body that seems to fade into nothing, from the waist down.

(That may be explained by a Japanese study – from at least a decade ago – showing that people store more energy in their upper body. If that energy lingers after death, perhaps it manifests in the shape of the upper body? Of course, that’s extreme speculation, but it makes sense to me.)

So, what was different in York…?

It was more like they’d emerged from a magician’s “sawed in half” act, but one where things went very wrong.

And, from the torso movement, the ghostly bodies seemed to be walking, anyway.

So, paranormal researchers studied the phenomenon.  Then, they realized that those ghosts – perhaps residual energy images – were walking on roads and paths that existed in the past.

The ghosts weren’t half-bodies, after all.

They were full apparitions, but the other half was underground.  (I’ve talked about this in the past, analyzing a ghost video.) 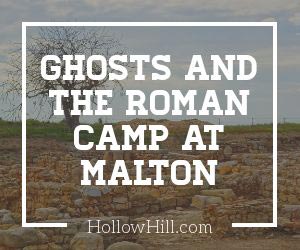 My point is: Roman ghosts – or at least their spiritual energy – seem to linger longer – and more vividly – than many ghosts from more recent eras.

I’m not sure why.

When I learned that Romans had built a fort in Malton, near Eden Camp – and probably a settlement around it – and the Romans lived there for four centuries… that really sparked my interest in the area.

I’m not sure how much archaeologists have excavated Malton’s Bronze Age tumulus (burial mound). At least one urn from the site is at the British Museum.

Here’s a 1926 map of Malton, showing the Roman Camp (outlined in green), and the tumulus (in red), next to – and perhaps partially beneath – the London North Eastern Railway tracks.

I’ve placed the 1926 map over a modern one (courtesy of Google Maps), for a general idea of what’s where, today… with apologies for mismatched areas. 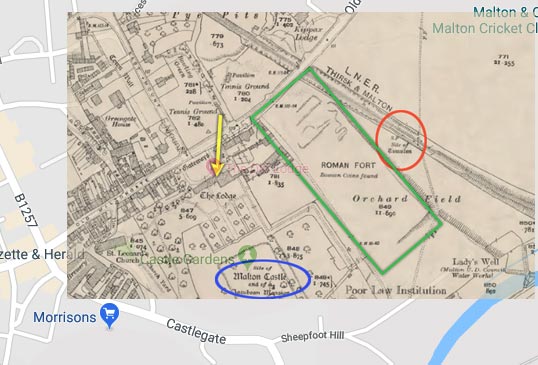 (The yellow arrow indicates the Lodge – still in Malton – and, in the blue oval, where Malton Castle once was. Both sites have unusual histories.)

So, at this point in my research, I’d found evidence of:

With this much quirky information, I was ready to delve deeper into the ancient history of Malton and Eden Camp.

It was time to return to my maps for a closer look at ley lines and Roman roads. Ley lines seem to be useful in ghost research, too.

In the 1960s, John Michell – in his book, The New View Over Atlantis –  suggested links between ley lines, sacred sites, and paranormal activity.

After that, many more investigators explored ley lines and reached similar conclusions. In his book, Mysteries, Colin Wilson quotes Michell:

[On the subject of ley lines] “Traditionally, they are also paths of psychic activity, of apparitions, spirits of the dead…”

From my own studies, I can vouch for that.

“Watkins’ friends joined his weekend hiking trips to document his vision. In early years, Watkins was convinced the alignments were ancient trader tracks linking settlements by the shortest pathways. In fact, Roman roads were built on the alignments. But careful research revealed the alignments existed long before Roman conquest. Late in his life, Watkins began to believe some other intention than commerce motivated ancient people to create the alignments.” [emphasis added]

Yarrow is correct about the alignments. This two-minute YouTube video shows how the Romans built long-lasting roads along precise – and carefully chosen – lines.

But why did the Romans choose those lines, and why make them so straight? Why not follow the contours of the land, heading in the general direction of the nearest community?

I’m not sure if answers exist. Some ley line enthusiasts equate ley lines and Roman roads, and suggest a spiritual element to the Romans’ plans.

That may be true. Here’s what I’ve observed:

So far, I haven’t decided if Roman roads and ley lines correlate.

But ley lines weren’t my only reason to study Roman roads near Eden Camp.

I wanted to see if Malton was a small (but long-enduring) Roman outpost at the end of a dirt path, or something bigger.

All Roads Lead to… Malton?

I created the following map – based on others’ historical research – to see how important Malton was in Roman times.

So many Roman roads point to Malton, the town seems like a major hub of Roman activity. That suggests a significant Roman population.

That could explain why – in the first Most Haunted episode about Eden Camp – the ghosts claimed multiple people died there. (Only one death had occurred during the POW era.)

And, since those Roman roads – perhaps ley lines – converge at Malton, that could mean the town has heightened paranormal activity, too. (That’s not guaranteed. In the early stages of evaluating a site, I lean slightly towards skepticism… but note this kind of configuration, anyway.) 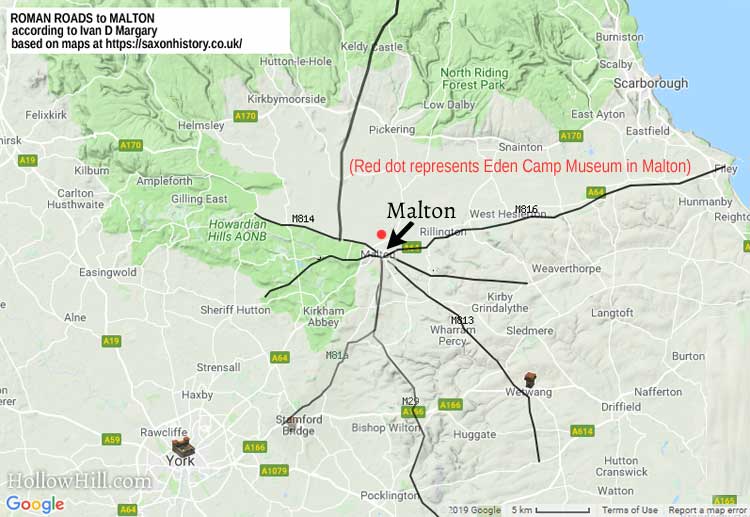 Also, Eden Camp’s location is so close to the center of that network, it’s reasonable to believe the prison camp was not the first use of that site.

In fact, I’d question if the land already had a “bad vibe” or something, so people decided it wasn’t prime real estate. In that case, it was a perfect site for a POW camp.

I’ve seen this in the past. When a community wants to build something distasteful – a cemetery, a prison, etc. – they look for empty land that’s slightly outside the town centre. Often, that land is empty because it has an unsavory history, or a creepy legend connected to it.

If Eden Camp is truly eerie and haunted, I’d bet the land beneath it has an unsavory history.

Whatever happened on that land in the past, its history (and energy) may be part of what’s haunting Eden Camp.

In my next article, I’ll describe several other reasons why Malton – and Eden Camp – may be haunted. And I’ll list some of the most-often reported ghosts there.

Malton has a fascinating history including political conflicts, plots, feuding relatives… and an unusual mystery that’s never been explained.