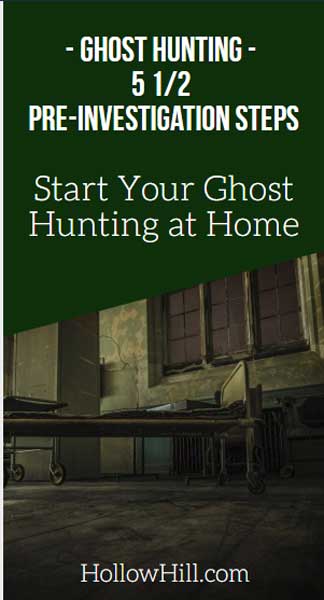 Did you know…? The very best place to start ghost hunting is at home. Here’s why…

It’s not because your home may be haunted. (Of course, it might be.  If you’re a ghost enthusiast, that could be a plus.)

It’s because you can learn so much that will be useful later, when you investigate the site.

And, nearly all of this research can be done at home – or even during your lunch break – with Internet access.

In my recent article series about haunted Eden Camp and the ghosts of Malton, England, I explained what I look for, with examples from those locations.

Here’s exactly what I do…

First, I look for ghost stories. (This is the half-step. If I’m investigating a private home, their may be no ghost stories at all.)

If I find some, I check them against history. Do historical events and people match the stories?

A bogus story can diminish the likelihood of the site being haunted, but I won’t dismiss it altogether.

Maybe King Henry VIII or George Washington didn’t spend the night in that haunted castle or home. A similar-looking ghost – a different man in royal robes or a Revolutionary war uniform – might haunt the sites.

Then, I check for ley lines. I’m looking for nearby haunts and reported anomalies, or places that usually have ghosts.

I want to “connect the dots” with a straight line between the site I’m investigating and at least two other haunted/anomalous/weird locations.

After that, I look for other patterns… things that connect the investigation site to other, similar haunts.

For example, in Austin (Texas), I discovered ghosts at nearly every site related to Abner Cook and bricks from haunted Shoal Creek.

So, I look at geography, history, related sites (nearby or in other areas), etc.

Next, I dig into ancient history.  In Britain, that’s usually related to the Celts, Vikings, and Romans. In the US and Canada, I research Native American history, and which locations were considered “sacred” or “forbidden.”

I’m not just looking for ghost stories. I’m also looking for extraordinary people and events – and related secrets – that can indicate a haunting.

Crime reports and court cases (reported in local newspapers) can provide some of the best insights.

The final step is to ask, “What’s weird?”

That is, what leaps out as different? What location or person or moment in history seems to linger in my mind, as something odd?

In a series of “odd” things – like the Salem Witch Trials – whatever stands out is usually connected to the darkest history of the area.

Those give me a context – and possibly credible support – for whatever we’ll find during the on-site investigation.

And, with those clues, the investigation can be more focused. We can find the “hot spots” of ghostly phenomena – EVP, cold spots, apparitions, shadow people, and so on – faster than if we’re just… well… working in the dark.