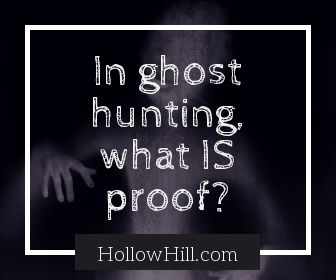 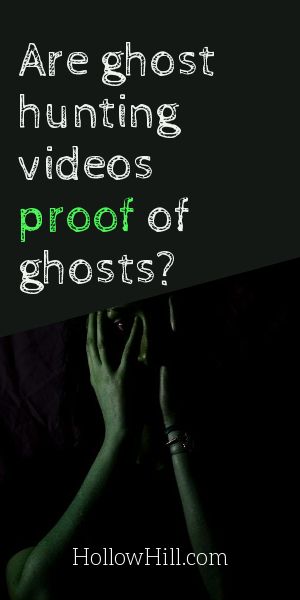 Are ghost hunting videos proof of anything? What is “proof” of ghosts? Reality shows have affected standards, and – as I see it – that’s a problem.

Those shows still led people to expect paranormal investigations to be just like Ghost Hunters, Paranormal State, Ghost Adventures, and Most Haunted UK. But that wouldn’t be very interesting to watch as entertainment.

(In my opinion, the Klinge Brothers’ Ghost Lab series was far more realistic, but even that was edited for sensationalism and cliffhangers at commercial breaks.)

What Do Ghost Hunting Videos Prove?

A recent article, 5 Ghost Hunting Tactics To Use In 2019 (https://www.ghostlyactivities.com/5-ghost-hunting-tactics-to-use-in-2019/), I read the following:

“In 2018, I invested heavily in video equipment. When I go on ghost hunts now, I bring 3 or more camcorders with me. Video is the language of the Web now. If you can’t put the clip online for your peers, curiosity seekers and skeptics, then everything you captured and experienced is just fiction for the masses.”

I’m not sure when personal experience took a back seat to the goal of proving something to others. Between Photoshop and AfterEffects, almost anyone can edit ghost hunting photos and videos to look fairly convincing.

In Ghost Hunting, What is Proof?

When someone talks with me about their encounter with a ghost, their physical evidence can be compelling. Maybe even cool to see or listen to.

But that’s not the primary standard I use in evaluating whether the experience was paranormal.

I’m always listening to the words they use, and how they say them. Are they trying to convince me, or do they sound astonished, even baffled by their experience?

If it’s necessary to prove things with video clips, I wonder how much narcissism – the value of others’ opinions more than your own – is affecting this field.

Of course, if you’re hoping to spin a successful YouTube channel into a TV series, yes, videos do matter.

But, in my opinion, your personal experiences – particularly what impacts your five (or six) senses – are the real evidence.

I think they’re far more important than expecting a ghost showing up, on cue, for your photo, EVP recording, or video.

When most people talk to me about a site that may be haunted, their questions come from two very different contexts:

1) They are afraid their home is haunted, and they’re worried about their safety; OR,

2) They’ve experienced something odd (or have a photo or video with an anomaly), usually at home or at a family gathering, and they’d like to think it was a visit from their great-aunt Harriet… or someone else they loved, who’s passed.

Of course, I pay close attention to anything that might be a real safety concern. That includes everything from carbon monoxide leaks to a malicious – perhaps demonic, not ghostly – presence.

If the person might be in danger, I advise them to stay with friends or relatives while their concerns are evaluated by professionals. (This usually means a skilled home repair expert, and perhaps an expert team of paranormal investigators.)

But, if they’re unnecessarily anxious, I assure them that it’s probably not a ghost.

And, even if it is, most ghosts are harmless. They may be bad-tempered or cause mischief, but it’s not like the Paranormal Activity movies, or Netflix’s Hill House series.

On the other hand, if the person feels that they’ve had a meaningful visit from their beloved great-aunt Harriet, I’m happy to agree that her spirit may be saying hello, now and then.

Between those two extremes are the kinds of cases that most ghost hunters are looking for. I usually hear about them from fellow ghost hunters, and people who’ve just begun exploring haunted sites.

In those reports, people talk about their experiences as weird, eerie, and spooky. They’re not sure what to do next.

This is important: Almost every credible, first-person ghost story has a mix of intellectual curiosity and emotional uncertainty.

The Best Evidence is Personal

In recent conversations with fellow researchers, almost 100% of paranormal professionals have raised concerns about people’s reliance on ghost hunting equipment.

It’s something I’ve talked about before: Events where people are so fixated on their EMF devices or “ghost apps,” they completely miss the truly astonishing phenomena right in front of them… because it doesn’t show up in photos, videos, etc.

Real ghost hunting usually involves sitting in one location for hours, with nothing happening.

And then, when something does occur, it may only be a fleeting chill (or blast of heat), or a momentary visual anomaly or sound.

It might be some other sensory strangeness, and perhaps an emotional connection that can’t be explained or forgotten.

Or, it may be something terrifying, and you run out of the site as fast as you can… and hope it doesn’t follow you.

You can’t convey that in a video. Not the bone-chilling shock of your first ghost encounter.

Personal experiences are what make a ghost hunter certain that he or she just encountered something paranormal, and probably ghostly.

That’s also what draws people to this field: the eerie, spooky, utterly weird things that happen in truly haunted places. No Halloween “haunted house” or TV show can provide that experience.

Are you brave enough for that?

Why Are You Ghost Hunting? 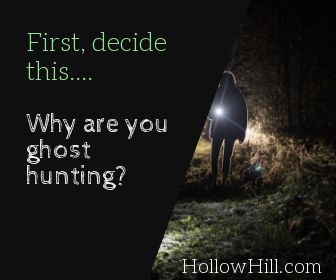 If you’re trying to replicate something you saw on TV, that’s an unrealistic goal.

Some TV shows are more authentic than others. Few, if any, show what people really experience as ghost hunters.

If you’re hoping to create a popular YouTube channel of ghost videos – and perhaps get a TV show of your own – you’ll need to be very creative with your video editing as well as your acting.

The good news is, a lot of people have given up on ghost hunting. The bad news is, they had good reason to. Even the iconic show, Ghost Hunters, was cancelled.

Others – like Most Haunted UK‘s reboot – took a break and returned with a more authentic, slightly skeptical approach. And, they’re going out on a few limbs, as well. (So far, I like what they’re doing with the new version of that show.)

So, if you’re ghost hunting for an audience, maybe you should focus on video equipment, as recommended in the “Ghost Hunting Tactics” article I mentioned, earlier. He makes some good points in that article.

When You’re Truly Intrigued by Ghosts

But maybe – like me and many researchers – you’re hoping for an extraordinary, memorable encounter with something you know can’t be explained… except as something ghostly.

In that case, I’m not telling you to abandon your ghost hunting equipment. Instead, set it up so it’s mostly hands-off.

Or, take turns with your ghost hunting equipment. For example:

For me, the thrill of ghost hunting is when I see something extraordinary, like a brief flicker of an apparition. Or, several of us are struck by a tidal wave of unexplained grief.

Or, we sense the anger of a very territorial ghost who disapproves of us, or he’s protecting “his” home. (Sometimes we’re polite and leave. Usually, we advise him that we have every right to be there, too.)

In general, the range of eerie experiences is wide, and – when you encounter it – you know it’s something paranormal.

I believe the real proof of a ghost is personal. It’s what you experienced and how it affected you.

And that’s what really matters, whether or not you can support it with photos, videos, EVP, or anything technological.