Poltergeists – What they are, famous stories 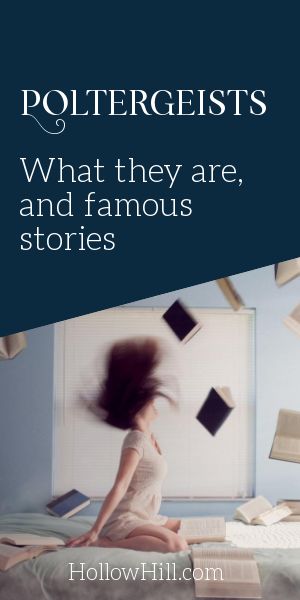 Poltergeists cause unexplained noises, and move objects with unseen hands.

On TV, one of the most famous examples was in the Ghost Adventures episode filmed at the Goldfield Hotel.

Though I can’t clearly see enough to claim it’s a genuine event, Zak continues to refer to it as one of the scariest moments in the show’s history.

If he had reason to suspect it was a hoax, I doubt that he’d keep revisiting this topic. He’d probably hope people forgot it.

So, I take this seriously.

Goldfield, Nevada, Goldfield Inn evidence of paranormal. Brick flying across room from unknown force captured in 2008 by Zak B. and Nick G. during their firs…

In folklore and parapsychology, a Poltergeist (German for ‘noisy ghost’ or ‘noisy spirit’) is a type of ghost or other supernatural entity which is responsible for physical disturbances, such as loud noises and objects being moved or destroyed. They are purportedly capable of pinching, biting, hitting, and tripping people. Most accounts of poltergeists describe the movement or levitation of objects such as furniture and cutlery, or noises such as knocking on doors.

Among paranormal researchers, opinions vary widely. Some insist that a ghost – and only a ghost – causes the activity.

Others believe a living person triggers it, and is sometimes the target of particularly vicious physical attacks.

And some dismiss poltergeists entirely. They point to hoaxes, and vibrations from sources such as a passing train or heavy truck.

No simple, single answer that applies to all cases.

In my opinion, people who casually shrug off all poltergeists have never witnessed much poltergeist activity.

When poltergeist activity is infrequent or not especially dangerous, a bowl of salt seems to reduce or eliminate the problem. Place the salt where most of the activity occurs.

Of course, if the activity puts anyone at risk, it’s important to get professional help quickly. I refer people to spiritual advisors such as priests and ministers. In extreme cases, consult specialists in potentially demonic activity. They include John Zaffis, N.E.A.R., and Peter Haviland.

Meanwhile, some scientists are aggressively studying psychokinesis (PK), which may explain some poltergeist activity. So, we may have better answers, soon.

The following are references and notes from my 2010 podcast about poltergeists. (Like many of my older and outdated podcasts, that one is offline now.)

This book reads like a children’s series of “ghost stories.” But, it’s actually filled with unique and fascinating information about ghosts and poltergeists.

He was the first researcher I heard mention an eerie connection between poltergeist activity and water, especially unexplained water residues.

Often overlooked by researchers, this book is among my favorite resources for unusual insights about the spirit world.  I keep a copy by my desk. Though the stories and descriptions seem light, Wilson includes some unique and useful insights.

Also, I agrees with Wilson when he says, “…the evidence is that we do continue to exist. And I don’t think that there’s any possible doubt about it.”

Winchester Mansion (aka Winchester Mystery House) – Wikipedia entry – One of the world’s strangest and most haunted houses. Often, its poltergeist activity is accompanied by small, unexplained pools of water. Those pools occur in rooms with no windows and no adjoining plumbing.

(I will write more about these events, later, and include previously unreported facts. They may shed new light on these famous poltergeist stories.)

This movie — hard to find as a DVD, since the movie studio discontinued it — claims it’s based on a true story.  I don’t recommend it. The content in this film is very disturbing, and sexually explicit.

Produced in the early 1980s, the movie is dated. Those who’ve watched it consistently describe it as sick, and too realistic for entertainment.

That may be why the movie was discontinued.

The poltergeist, Peeves, appears during every school year.  However, when he is visible, he generally looks solid.  (That’s not common among poltergeists.  Few appear in visible form.)

Other Hogwarts spirits, such as Nearly Headless Nick, usually look translucent and slightly glistening or pearlescent.

2 thoughts on “Poltergeists – What they are, famous stories”