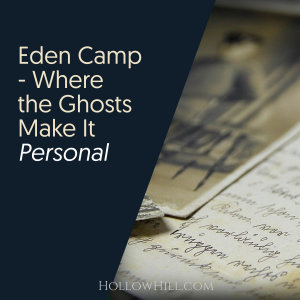 Eden Camp (in Malton, England) may be one of the eeriest sites ever shown on “Most Haunted.”
And it’s one of England’s best locations for ghost hunting.

If you saw the two-part Most Haunted episode in January 2019, it might have looked like a tame, friendly little haunt.

There are three reasons I  recommend Eden Camp:

In my review of the first half of Most Haunted’s Eden Camp Museum investigation, I described almost steady, low-level phenomena.

Those things aren’t scary, but when you hear enough of them, it can get under your skin.

In some locations, like the bungalow (the pre-fab house), Eden Camp’s ghost/s seemed to respond rapidly to what Karl or Stuart said.

But even when the ghosts weren’t reacting to questions or commands, the unpredictable – and usually random – noises continued.

Aside from the bicycle (in the bungalow) falling over multiple times, what happened wasn’t physical. No one seemed at risk.

Such regular – but apparently minor – activity makes Eden Camp an ideal site for a ghost vigil.

But… more experienced investigators might not take Eden Camp so lightly. 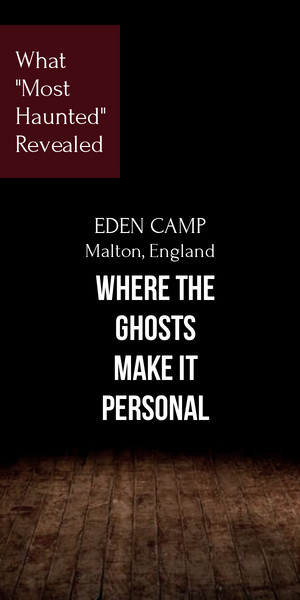 In my previous review, I mentioned two impressive aspects of Most Haunted’s investigation.

Of course, it’s always a relief when a site has a steady patter of activity. At most locations, ghost hunters sit and stand for hours, waiting for something to happen.

It’s not that the ghosts were entirely obliging at Eden Camp. Yvette gave them many opportunities to manifest – as noises, poltergeists, and so on. But, they seemed less interested in startling her.

However, in Part 1 of the show, I noticed a few unusual things.

First, when the team were working in pairs of two, unearthly footsteps seemed to come from two distinct areas in one hut.

Mary Beattie impressed me when she quickly realized something was trying to separate – and isolate – team members from one another.  As a professional investigator, that kind of activity is a big red flag. It’s one step away (no pun intended) from being malicious activity.

And, in most cases, it seemed like a deeply personal effort by Eden Camp’s ghost/s.

Then, something about Stuart’s demeanor troubled me. He seemed to internalize what was happening in the bungalow.

In other words, Mary could detach herself, mentally, from what was going on.

She saw the “method in the madness” of the moment.

By contrast, Stuart Torevell seemed deeply affected by the ghosts.

If one of my team member’s demeanor was like his, I’d be very concerned. He might need to leave the area for his own safety.

Stuart isn’t a ghost hunting novice.  Since 2002, he’s been part of the Most Haunted crew and team. He’s been at the center of some very troubling paranormal activity.

So, when you see Stuart seem troubled by what’s going on at a haunted site – even if the activity seems minor – pay close attention. That “red flag” may be subtle, but it’s significant. It’s a location that’s more haunted than most.

Remember: Those of us who’ve been investigating haunts for years… well, we get a little jaded. (That may be an understatement.)

And so on. We’re not as startled or impressed as we once were.

So, when a pro reacts – especially in a dramatic or uncharacteristic way – that’s an anomaly in itself. 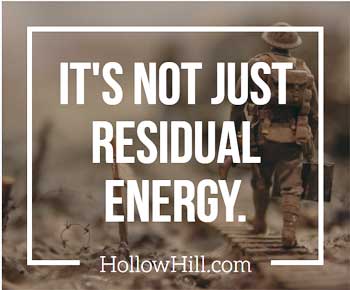 When I researched Eden Camp’s history, I found many reasons the site could have simple, residual energy hauntings.

It was a POW camp. People were there against their will, and some prisoners were Nazi officers whose political views were both extreme and aggressive.

That could explain lingering energy.

In later research, I uncovered Malton’s surprising importance as a Roman fort – and perhaps a hub of Roman occupation – for four centuries.

That’s why, when I started watching Most Haunted’s first episode about Eden Camp – broadcast “as live” – I thought, “Okay, Eden Camp has more than the usual amount of residual energy.”

Soon, I realized something intelligent was behind what’s going on at Eden Camp.

It wasn’t just what Mary said or how Stuart reacted… it was more. It was the consistency of the activity, and who seemed targeted by it.

The clever subtlety of Eden Camp’s paranormal activity impressed me. And its variety.

From my experience, a lot of hauntings are “one-trick ponies.”

The Mystery of Mixed Anomalies

When investigators talk in terms of three or four types of anomalies, either the site is profoundly haunted…

Or, some “anomalies” aren’t extraordinary.

To be blunt, either they’re imagined, exaggerated, or – in rare cases – rigged.

In this case, I think Eden Camp is haunted… really, really haunted.

Most Haunted’s Eden Camp episodes were among the most authentic ghost hunting broadcasts I’ve seen.

Chicken or the Egg? 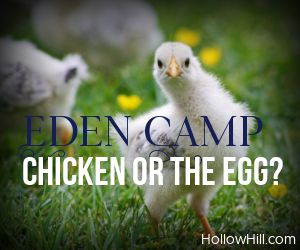 The intensity of the team’s encounters were why I started looking into other weird things in Malton’s history.

I found plenty. The question is, are there layers of turbulent history – or extraordinary energy – beneath what I found?

Or, was there some interesting energy around Malton from earliest times?

Each piece of weird history added to my general impression of Eden Camp and the Malton area… and its ghosts.

So, by the time I saw Part 2 of Most Haunted’s Eden Camp broadcast,  my expectations were high.

I was not disappointed.

There may be residual energy hauntings at Eden Camp. Some noises could be explained that way.

In fact, the team went out of their way to debunk most of the phenomena. 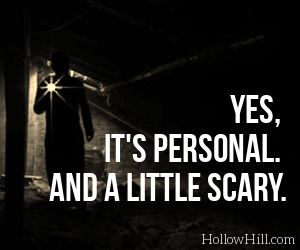 In the first episode, the cat might have been responsible for some noises.

Maybe the bicycle wasn’t solidly propped against the wall, each time it fell.

And maybe there was a technical glitch so the smoke machine kept running, intermittently.

Rapping noises on the ceiling (or roof) and in the walls… sure, maybe they were squirrels or mice.

The swinging doors might have been an odd gust of wind. But then another… and another? Each time that happened, “normal” explanations seemed less likely.

When you put all of these seemingly low-level anomalies together, the picture changes.

The fact is, almost all ghostly phenomena can be explained by a dedicated skeptic.

But… ghost hunters (like me) raise an eyebrow when many odd, “explainable” things happen, one after another.

It’s not the cause/explanation that holds our attention; it’s that these things happen at an anomalous pace, and all at one site.

Each of those was an anomaly, as well.

For example, at Eden Camp, relatively little seemed to happen around Yvette.

That’s odd. Usually, she’s the one most targeted by ghosts.

(She also recovers quickly when she’s startled. And then she gets straight to the point, challenging ghosts to make themselves – and their interests – known. Is it possible that Eden Camp’s ghosts were intimidated by Yvette?)

The ghost (or ghosts) know exactly what they’re doing.

They’re tailoring each person’s experience to the individual.

Creating anomalies that could be explained/debunked… that’s a great way for ghosts to get you to drop your guard.

And that’s why the two-part Most Haunted investigation of Eden Camp was so compelling: Each investigator had a unique, unsettling experience.

That’s why I recommend Eden Camp Museum for ghost hunting.

Something intelligent haunts Eden Camp. I don’t know what its motives are.

If you go there, never wander off. Never be on your own.

Why to Investigate Eden Camp’s Ghosts

Eden Camp is an ideal site for casual ghost hunters to encounter a “good scare.” I’m sure you’ll have a wonderful visit and vigil.

But, even better, Most Haunted’s investigation barely scratched the surface.

Your visit to Eden Camp could be intense.

Congratulations to Most Haunted for an excellent, authentic investigation. From my sofa, I was applauding.

*They did not ask me to recommend them and that’s not any type of affiliate link. I genuinely believe Eden Camp is one of England’s most impressive haunts.