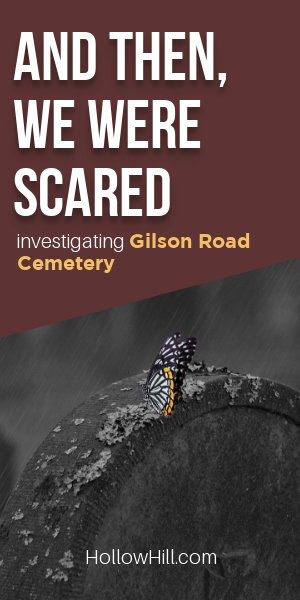 I think all of us were pretty rattled by what happened. Maybe we should have admitted how scared we were.

We each responded in our own way.

Most everyone headed for their cars. Some locked themselves inside.

I climbed back over the cemetery wall and tossed another roll of film into my camera. I didn’t want Nancy to feel as if we were waiting for her, so I started taking more pictures.

About a dozen photos later, Nancy was also ready to leave. She and Alice headed north in their car. Alan, Jane, James and I decided to go back to my house.

All of the way home, I kept hearing Jane’s shaky voice. She promised that she’d never joke in a cemetery again. She was very apologetic, and repeated that she hadn’t expected anything like this.

Alan slowly emerged from the apparent haze he’d been in during his first lengthy and intense encounter with the paranormal. He said over and over again that it was like a movie, but better… and worse.

James – most comfortable insisting that ghosts aren’t real – seemed to think the whole thing was pretty cool and didn’t say much.

I remember that I kept babbling, hoping to put it in a context for Alan so he’d understand the experience better.

(Also, I was still annoyed with Jane’s daytime joking in the cemetery, because I know that a flippant attitude or a vocal skeptic in the group can dash all hopes of getting good anomalies on film.)

Once we got home, Alan and Jane stayed to talk for awhile. About an hour later, Alice called from her mother’s cell phone.

Alice and Nancy had gone to Vale End (Wilton, NH), another, more famous haunted cemetery, and Alice had been chased by something dark and terrifying.

She was okay, but rattled. We agreed to talk about it later in the week.

The evening was finally over. I went to bed, but didn’t sleep well. Something seemed… wrong. Was it a premonition? I couldn’t decide, and tried to dismiss that thought.

But still… something felt wrong.

Three days later, my film was back from the developer: Over a third of the photos had anomalies in them.

During the time when I felt an intense energy rushing past me, like a train (but the air didn’t move), I had taken two photos with startling purple energy in them.

One of these photos – now famous – is below.  Click on it to see it larger, with an article about the picture.

The roll of film that had jammed (not the one with the purple photo, above) had a perfectly reasonable explanation: Somehow, sand had gotten into my camera. A few images on that roll were scarred where the sand had dragged along the film. I’ll be more careful in the future.

None of Nancy’s photos had anomalies in them. She wasn’t surprised. She said that people who experience paranormal phenomena probably pick up things on film that others don’t.

She had studied my earlier photos and the negatives from them, and had said that they were exactly what they appeared to be: Anomalies. Things that “couldn’t be,” as she put it. But they were not developing or printing mistakes, double-exposures, or anything like that.

Nancy had hoped to capture similar anomalies herself, but she seemed content to have a few great photos from an eerie cemetery. I’ll use at least one of her photos in my upcoming book on ghost hunting.

Since then, I’ve tried scanning my Gilson Road photos from November 5th, to show the anomalies. One photo has six anomalies in it, including a black orb. (Black orbs are very rare.) However, they’re very dim, even with 800 ASA film.

I’ve abandoned my scanning efforts with most of those photos. Even looking at the originals, it’s like “Where’s Waldo?” trying to find the orbs. They’re easy to spot when you know where to look, but otherwise, you’d never notice them in most of the photos.

But the purple-streaked photos are my trophies from that evening, along with the chilling memories of what we witnessed.

Alan and I went back to the cemetery one sunny afternoon the following week, so I could compare my anomalies with the surroundings. I was looking for things to explain the odd lights and orbs in my photos.

We climbed over several stone walls, and studied every corner of the cemetery. The anomalies in my photos remain unexplained.

Alan and I left after about an hour at the cemetery. I could feel the energy building up again. Although it was many hours before dusk, I could feel the “people” gathering again. The massacre probably happens again most nights, whether the living are there to witness it or not.

Gilson Road Cemetery is the most intensely haunted place I have ever visited. Whatever lives and dies there each night, is still a very powerful force.

The ridiculous thing is, soon after our visit, a developer began building Tanglewood, an upscale community across the street from Gilson Road Cemetery. Most people consider me a fearless ghost hunter, almost foolhardy at times. However, I’m not sure that I’d be willing to live near Gilson Road Cemetery.

One personal note about this story: My friend Nancy died of an apparent heart attack in the middle of November 1999, about a week after our first formal investigation at Gilson Road Cemetery.

A reader asked if there was any link between Nancy’s death and the Gilson visit. At the time, I didn’t think so, and I still don’t consider Gilson “dangerous.”

I didn’t write about Vale End Cemetery for a couple of years. Then I did, and several networks and local TV stations swarmed at Vale End, claiming that it’s a “world’s scariest” place. In my opinion, it’s not especially “scary”, but there are some risks if you go there.

Right now, I prefer to think that Nancy’s intense interest in ghost photography was due to a premonition she may have had, about her own time drawing short.

Also, I’ve talked with many people who’ve visited Gilson Road Cemetery. Not one ghost hunter’s story, from recent or distant past, has tragedy linked to it.

In my opinion, the only dangers at Gilson Road Cemetery are encounters with boisterous party-goers (at keggers behind the cemetery), the usual risks if you visit a cemetery after its closed, and the occasional turned ankle since Gilson has many snake holes and depressions that indicate unmarked graves.