During November and December 1999, a couple of us returned to Gilson Road Cemetery.  We went back several times after our first formal investigation at Gilson. The following are notes from some of those 1999 follow-up visits.

Purpose: To check for daytime phenomena, also for things that may have caused anomalies in first rolls of film that came back. 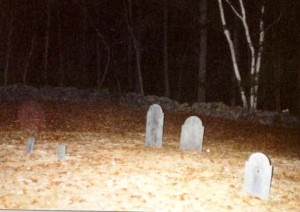 The photo at left has a small, reddish orb above a grave, and at the far right side of the photo there are a couple of “eyes” just above the wall. I enlarged them in the right photo. Results: Didn’t find anything to explain the “eyes.” I expected to find mushrooms or something similar. Energy seemed to be building at left corner of cemetery. Hiked to back wall past the cemetery, took photos. No anomalies.

Purpose: To check for gypsy moth nest, or anything else in trees that accounted for “sparkles,” some of which showed up in photos.

Results: The trees were nearly bare, with nothing to explain the reflections/sparkles of the 5th. Energy building, not so much as on the 8th, but still coming from the area past the back left corner of the cemetery.

Purpose: Just to check it out

Results: Saw a ghostly figure that vanished. Sensed two or three entities (male forms) in wooded area past back left corner of the cemetery. Saw, in our time, an adult-sized figure in a dark capote, probably brown-black suede. Figure was about 30 feet past back wall of cemetery, had to be near swamp. He was there for a few seconds, walking through the woods. He passed in back of a narrow tree — narrower than his body — but didn’t emerge out the other side.  I couldn’t believe that he vanished. I walked around, looking for him, still thinking he was a hiker or something. Nobody was there.

Who: Two of us at first, then a third person

Purpose: To take some photos

Results: Encountered what seemed like ghosts. Misty night produced questionable photos, but some anomalies other than orbs. Saw steady phosphorescent flickering around one headstone at top of cemetery. Flashes of light, bands of blue-white color, in woods behind cemetery. Most appeared to be about ten feet behind wall, determined by which trees lights were behind and which they were in front of.

Energy building, especially at back left corner of cemetery. Bands of spectral energy along left wall, and apparently across the street. Spirits (as “people”) arriving one or two at a time, from far right, behind cemetery. Flurry of violence perceived, then totally quiet again.