How much do ghost hunters charge? As of 2020, most investigators don’t charge residents who are worried that their home is haunted. 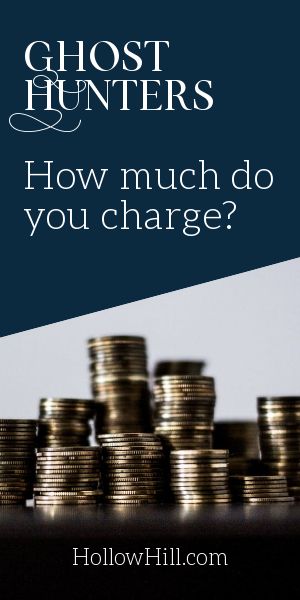 However, many ghost hunting teams do charge businesses – including hotels and restaurants – that want to advertise that they’re haunted.

(Is that a service you & your team provide? You may be expected to  provide them with evidence – audio or video – or a certificate  they can display. They may also want quotes or reviews they can use in their advertising.)

Between those two extremes, I think it’s reasonable to expect a client to cover your travel expenses. That should include meals, especially if you’re investigating overnight.

And, if sleeping accommodations aren’t available at the site, then local lodging – perhaps at a Fairfield Inn or similar budget hotel – should be offered to investigators.

No investigator should be expected to work late at night, and then drive many miles – especially on an empty stomach – back to his, her, or their home.

During June 2009, I conducted a poll when serious ghost hunting investigations were relatively new, and ghosts were trending in the news. I asked readers how much they charged when they investigated a private residence.

These were the results:

In 2009, in real-life conversations, most professional ghost hunters agreed with the poll results:  They didn’t charge the client anything at all.

Or – if travel expenses were involved – they asked the client to pay for gas and to arrange lodging.

Investigators who charged over $200 were also very forthcoming.  The figure that I heard most often was $350 plus expenses. That increased if the team included more than three people.

Four-figure amounts were not rare when the team included professionals, and six or more experienced investigators.

2020 update: In recent years, this has changed. Most ghost hunting teams do not charge anxious clients to investigate homes.  But, teams are more cautious about which locations to investigate.

Ghost hunting seems to be trending again. That may create fresh interest in having professionals investigate a home or business. So, we might see a return to 2009 fee levels.

Client fees and investigation services seem difficult to discuss, even among professionals who otherwise agree on most everything.

Some say, “You get what you pay for.”

Others insist that investigations are an essential part of our research. So, we shouldn’t charge anything.

I think the poll speaks for itself, to understand the financial side of investigations.

If someone is troubled by an apparent haunting in his, her, or their home, it’s probably easy to find a team – especially amateurs, and those looking to build their portfolio of investigations – to conduct the research free of charge.

If someone wants to hire a professional team, the fees are likely to be $200+ for that service.

When I investigate private homes – rare, in recent years – I expect the home owner to cover my travel expenses.

If the site will use my research to improve their business (such as a restaurant or hotel that wants to claim they have ghosts),  a fee may be involved. It depends on whether I’m intrigued by the location.

A site like the Myrtles Plantation or Tudor World (the Falstaff Experience)…? As long as my expenses are covered, I’m delighted to investigate. My past experiences at both of them were memorable.

At the other extreme, I’ll turn down a site with health risks, such as a building with a recent rat infestation, or asbestos and black mold. Also, I won’t go into dangerous neighborhoods, day or night.

Generally, my fees vary with what they expect from my team and from me.

(Note: I’ll never say that a site is haunted, unless I’ve investigated it, found anomalies, and couldn’t debunk them.)

When a homeowner is frantic for help, I usually look for ways to reduce or eliminate their costs altogether.

I know that – by the time a homeowner or tenant contacts ghost hunters – they may have had medical bills or stress has taken a toll. Usually, they’re not in a financial position to pay professional investigators.

Carefully consider investigation requests. Especially if a site is old and badly maintained – or if it has (or might have) poltergeist activity – be especially cautious. Also, be sure you’re insured against damages the client may claim.

Remember: Poltergeists rarely respect costly vases, or the personal and replacement value of china that’s been in the family for seven generations.

Get everything in writing, ahead of time. If travel expenses will be covered, make sure you receive them in advance.

Be skeptical. I’m not saying that all victims of haunted houses are exaggerating, but some are, or they have mental health issues better resolved by health professionals.

In addition, we’ve seen an increase in demonic activity at some sites. So, be very sure the potential client isn’t describing something dangerous.

Ghosts and demons are two different categories. Most ghost hunting teams – including my own – are not skilled demonologists.

If a site might be troubled by demons or malicious entities, refer those clients to a local priest, minister, or skilled (and trusted) demonologist. (I generally refer people to John Zaffis, Pete Haviland, Carl & Keith Johnson, and others I know and trust.)

For homeowners, tenants, and business owners

No matter who is investigating, homeowners should check references carefully. Don’t rely on rave reviews by friends of the individual or the team.

Some people claim they’ve been ghost hunting for years.  Ask them for evidence of their expertise in the field. That means multiple years of experience, as well as professional, no-hype websites, YouTube channels, and so on.

Be sure the investigation is worth the cost

If you’re a home or business owner, be sure you’re hiring a competent team.

Then, be prepared for the truth. Your site might not be haunted; it may just need repairs.

From my experience, about 80% of haunted buildings can be debunked. The usual problems:

Also, ghost hunting is not a field where haggling is the norm. If you respect the team enough to want their opinions, pay their standard fees.

The best investigators will tell you whether or not they think your site is haunted. They’ll also advise you about what you can (and can’t) do about the ghosts.

If you’re part of an investigation team, be honest about your expertise. Avoid mimicking what you’ve seen on TV.

Your first steps are:

If you’re not willing to do all that for each client, and at a cost you think is fair, have an honest conversation with him, her, or them.

Perhaps a scaled-back investigation is enough. Or, maybe another team might be better suited for the job.

14 thoughts on “Ghost Hunters – How Much Do You Charge?”