Austin, Texas has many ghosts. While researching Austin for my 2007 book, The Ghosts of Austin, Texas, I found patterns to many of the hauntings. Here’s one of them. 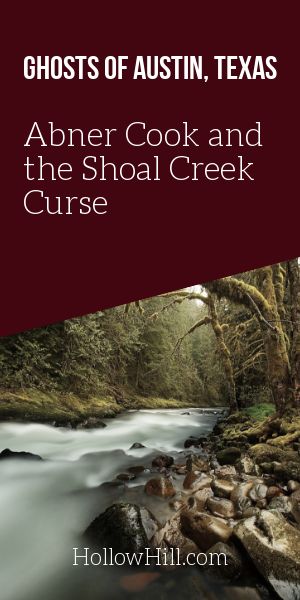 O. Henry, the famous author and former resident of Austin, once wrote, “It is a well-known tradition in Austin and vicinity that there is a buried treasure of great value on the banks of Shoal Creek, about a mile west of the city…”

Two treasures were buried at Shoal Creek. One is from 1770 and the other is from 1836. One may have been found; the other wasn’t.

Searching for those treasures resulted in many deaths and hauntings. But, gold isn’t all that’s buried at Shoal Creek, and treasure hunters aren’t its only ghosts.

Gideon White was killed with several others during the 1842 massacre at Shoal Creek. No one is certain how many of the victims were buried at the site. (White’s grave at nearby Oakwood Cemetery is also haunted.)

There are many other unmarked graves at Shoal Creek. Many victims of cholera and yellow fever were hastily buried at the Creek.

These include soldiers who camped at the creek during the Civil War, and those who served with General Custer during his Reconstructionist occupation of Austin.

Most of those bodies were later removed and reinterred at Arlington National Cemetery, but about 35 graves were never found.

Then, in April 1915, a flash flood took even more lives along the banks of Shoal Creek.

These are just a few of the tragedies associated with Shoal Creek, making it one of Austin’s most haunted areas.

Ghosts are reported at many sites around the creek, including the parking lot at Central Market.

But the ghosts don’t stop at Shoal Creek. Architect and builder Abner Cook used clay from Shoal Creek for bricks.

And then he built homes and public buildings around Austin. So far, I’ve found a ghost story at almost every site he built with Shoal Creek bricks.

In my book, The Ghosts of Austin, you’ll learn how Abner Cook’s business practices turned Austin into Texas’ most haunted city… and where to find his creepy, haunted sites.

(Visit his grave, too. I’m not sure it’s haunted, but nearby graves certainly are.)

The Ghosts of Austin, Texas describes over 130 ghosts and haunted places in and around Austin. From fun (but true) “ghost stories” to chilling tales of dark, haunted places, this book offers plenty to delight every ghost enthusiast.

6 thoughts on “Austin Ghosts and the Shoal Creek Curse, TX”

The Many “Pig Man” Ghosts – US