This video is a great example of what real-life ghost hunting was like in 2012. I’m thankful for GFI’s research, especially the work of their cousin and tech guy, the late Joey Thorpe.

As ghost hunters, I think it’s important to remember the importance of every day, and every person we interact with, in real life, online, and at haunted sites.

If it hadn’t been for Joey and the GFI team, we wouldn’t have this kind of record to learn from, today and in the future.

Thank you, Joey, Adam, and GFI.

Here’s my original article, lightly edited in 2020, and with added comments by GFI’s Adam Bennett.

This was our second visit to Poasttown. We retured because we felt we had unfinished business at this haunted location. We will release a full video in the f…

The first one is good, but I’m not certain it’s ghostly. Also, I need to spend more time reviewing the second one.

These clips are good reminders of how closely you need to study videos, to see anomalies in them.

Note: I recommend muting the music in that video to reduce distractions as you study it. (However, I understand that most viewer probably aren’t going to dissect a video as I do. Also, I’ll admit the music is campy and kind of cool.) This first screenshot is from the corridor, when it’s normal.  It’s at the end of the first clip.

Like most night-vision videos, darkness and shadows are always an issue.

Ditto matrixing… looking for form and meaning in something that’s merely odd (not paranormal) at best.

What I’m seeing is a door that has a window, and a somewhat reflective surface on the door itself.  The floor is shiny and reflective as well.  Both of these could explain what happened in this video clip… but do they, really?

The next photo shows the point that interests me the most.  In it, a shadow figure seems to cross in front of the door, below the height of the door handle. 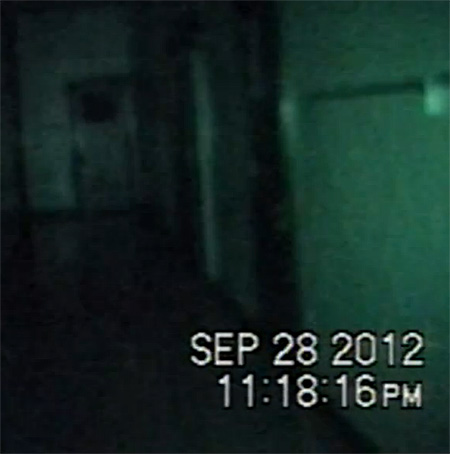 It might be a normal shadow.  If someone ducked down and walked in front of the video camera, that could cast a shadow in the light, even though the person’s body wasn’t seen in the video.

Or, the shift in camera position could account for different lighting effects that simply look paranormal.

So far, there’s nothing  conclusive here.

To get a better understanding of what I’m looking at, here are two annotated screenshots. 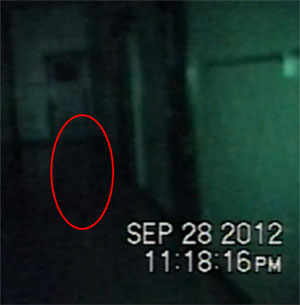 At right, you’ll see a the 11:18:16 PM screenshot again. I’ve placed an oval over the areas that interest me the most.

(As this screenshot shows, the interesting area is dark. You may need to watch the video again, and adjust your screen settings to see it.)

I’m looking at a shadow that crosses in front of the door.  At its tallest, it’s about two feet, maybe two-and-a-half feet, tall. (Less than one meter.)

Then there’s the darker area in front of the door.

Let’s say it is an apparition or shadow figure.

Now, we have two questions:

Attempt at a clearer image 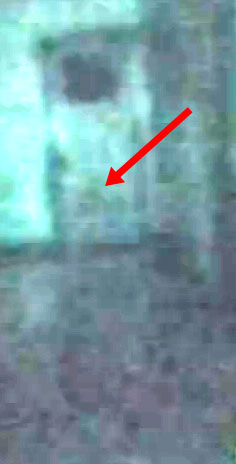 Increasing the contrast didn’t answer any questions.  An example is at left.  The arrow points to the top of the shadow figure, as I see it.  (Others may see something totally different.)

Except that I discount what seems like easy matrixing, several other frames in this video offered some strange images.  One looked exactly like a line drawing of a head and torso, extending all the way up to the window in the door, and the shadow was in front of it.

Also, I can see a variety of figures – some upside up, some upside down – in the reflection or possible shadow figure in front of the door.

Yes, my speculations go far out on a limb.  That doesn’t mean the anomalies aren’t real.  Based solely on the video, I can’t claim the images are evidence of… well, anything. Yet.

But, let’s not get that serious.  I think it’s important to ask “what if…?” about even the threadiest evidence. (And, frankly, this video is better than many – and maybe most – that I see.)

You never know where your questions will lead.  They may not apply to the evidence in question, but they may trigger ideas for fresh investigation techniques, or new things to check for in old evidence.  (This is why I urge people never to delete old photos, videos, or EVP recordings.)

A shadow person could look that small 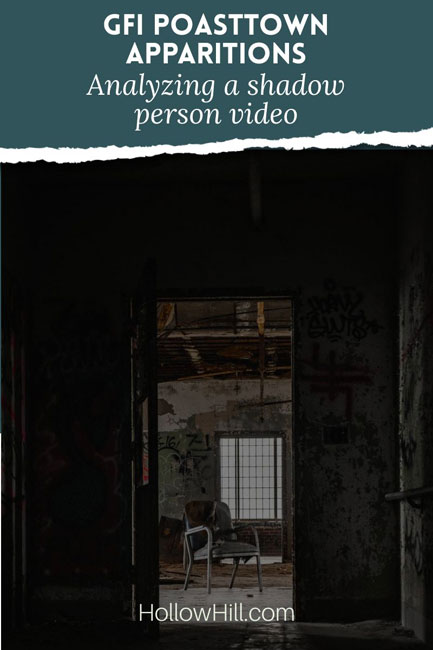 So, let’s say that the shadow figure is directly in front of the door.  Why would it be that small?

Here are a few explanation:

1. The ghost is walking on a level that existed in his lifetime, and only his upper body extends above the current floor.

I’ve seen this phenomena among apparitions in homes where the floors changed, due to a structural change in the building.

For example, when a Victorian home (with high ceilings) is converted so the attic becomes a new living space – by lowering the floor – or the height of the foundation changes (common in homes renovated after flooding), the ghosts may be walking where the old floor was.

(Similar reports around York, England, describe half-bodies of Roman soldiers, still marching where the ground used to be, but it’s been filled-in, since.)

2. Maybe it’s not a ghost. Maybe it’s what researchers describe as a faerie.  Some faeries, such as gnomes, are about two or three feet tall.

3. Or, perhaps it’s another kind of entity, also small in stature.  (See my book, Ghosts – What They Are and What They Aren’t.)

At this point, as a researcher, I’d need more evidence to be sure that this video is showing something paranormal.

Is that realistic for a typical ghost hunting team? No. Most teams don’t have the budget – or a large enough team – for that kind of evidence collection.

This is one reason why – as of 2020 (as I’m updating this article) – I stress the importance of personal observation. Not just what you see or hear, but how it affects you.

Ultimately, almost any ghost-like phenomena can be debunked by a determined skeptic.  (Whether their arguments are credible… that’s another matter.)

Often, the real proof is how the haunting affects you, personally. When you know you’ve encountered something unexplained, no one can debunk that.

This video is odd enough to make additional research a priority.  Something seems to be casting the shadow, but – without further evidence – it’s difficult to tell if it’s a normal shadow, a shadow figure, or something else.

In August 2020, GFI’s Adam Bennett generously shared some of his insights about this video. Here’s some of what he said:

Tremendously slow down the second video. The ear effect was caused by a shadow cross contaminated with the movement of the apparition. As it retreats back into the room you can make out what looks to be a head, upper torso, and arm. The arm looks to extend and push itself back into the room. Hopefully that helps clarify.

If you pause it as it returns back into the room you can see a transparent head, arm, and torso.

Those are useful tips. (Thanks, Adam!)

Also, I was pleased when Adam added the following information about Joey Thorpe. Personal insights create a connection, and make ghost research mean so much more.

Our video guy and my cousin would be so proud and pumped that the video is is still around. We miss him a lot. We don’t investigate anymore. 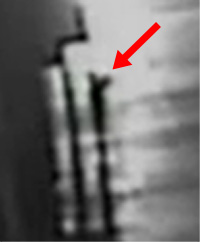 The second segment of this video confuses me.  Maybe I’m not looking at the correct area in the video, because what I’m seeing doesn’t look paranormal.

Many years ago, in our Florida kitchen, we saw mice that looked disturbingly like Mickey Mouse.  (When I set them free, far from our house, I think they just returned to my kitchen, rather than heading to Disney World.)

In the Poasttown video, I see something rush out, pause, and then rush back into the wall or a doorway.  To me, it looks like a mouse or a rat… a rodent with large-ish ears, whatever it is.  Varieties of mice with ears this large include Gremlin mice.

That b&w image (above) was an enlargement of the screenshot.  To me, it looks like a mouse on his hind legs, with his ears at full alert, watching the person in the doorway, further down the hall.

Then, he drops back down on all fours, and scurries back to the room or opening where he’d emerged from.

Of course, with a really shiny floor, it’s difficult to evaluate the figure’s height.

Maybe the anomaly is something else in the video.  I’ve watched it several times, and the mouse-like figure attracts my attention every time.

If there’s something else in this video that I’m not seeing, please let me know.  I’d hate to miss a really good anomaly.

The first segment in this YouTube video shows something odd enough to make follow-up investigations imperative.  Though I can explain the shadow in a variety of ways, I’d want to visit the site for test like these:

For most people, that shadow figure puts this in the “scary ghost video” category. That figure is something I can’t fully explain. When I investigate a site, that kind of anomaly is exactly what I’m looking for.

The second segment – the b&w one – the activity at the left side of the screen looks too much like a mouse or a rat.  But, as I said, maybe I’m missing a truly interesting anomaly in another part of the corridor.

Takeaways from this video

You can read my conversation with Adam Bennett in comments at a post at my Facebook Page, Fiona Broome News. Thanks again to him, to GFI, and especially to the late Joey Thorpe, who helped us understand ghost hunting better. He will be remembered, with gratitude.

One thought on “GFI Poasttown Apparitions”