Scouting haunted New Hampshire locations* for a TV series, I discovered a wealth of eerie sites to investigate.

Here’s the podcast I recorded in 2011, shortly after the TV series was cancelled, and I was free to talk about the haunts I found.  (This was recorded in the car, so the sound quality is a little tinny.)

Note: this isn’t a “ghost story” podcast.  It will be most interesting to people who are looking for investigation sites in or around New Hampshire’s Lakes Region.

Here’s more of the area’s history and some of my photos (a few are large) related to the strange and haunted sites. 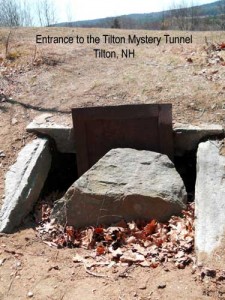 The Tilton “mystery tunnel” actually starts in Northfield, NH, not far from Exit 19 on Route 93 in New Hampshire.  The entry — currently blocked with a boulder and an iron door — is off the paved path between Tilton Memorial Arch and downtown Tilton.  (Walk towards town and, on the right, you may see an area where foot traffic has left a mark.  The entrance to the tunnel is about 10 feet from the paved path.)

According to local residents, the tunnel’s stairs were filled in and the entry has been blocked by the police — who patrol the area — because kids were using the tunnel for drinking.

I’ve heard a wide range of ghost stories connected with the tunnel entrance, the Tilton Arch, the cemetery at the Northfield side of the hill, and Tilton School.  Around downtown Tilton, you may hear even more stories.

The tunnel-related stories usually involve a misty form or apparition.  I’ve heard about orbs — visible and in photos — but, except for a slightly creepy feeling at the tunnel itself, I didn’t experience anything odd around the Tilton Arch or the tunnel entrance.

I talked with someone who’d been in the entrance to the Tilton tunnel.  He said that the interior is very nicely finished, and it’s clear that something — at least one tunnel — had been sealed. 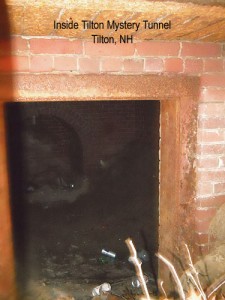 The photo on the right shows what’s immediately in back of the iron door.  My camera was in the initial entry room, and — beyond it — you can see a second, large room (and sealed — or filled-in — arched passage entries) with beer cans on the dirt floor.

The workmanship is extraordinary.  That’s the baffling part.  This wasn’t just a root cellar or cold storage built by a neighbor for personal use.  However, I’ve found nothing in any records  — online or offline — to indicate a purpose related to the arch or the park.

Who built the Tilton Mystery Tunnel… and why?

No one seems to be certain why the Tilton tunnel was built, or where it leads.  There are two anecdotal explanations, both tied to ghost stories, and both loosely linked with the idea that it was an Underground Railroad stop between the northeast and Canada.

(There are lots of strange, hidden rooms in houses around Tilton and Laconia, NH.  Most are linked to Underground Railroad activity in the 19th century.  Others may date back to Indian attacks in Colonial times.)

The connection with the Tilton Arch site is unlikely, since the tunnel would have to lead under the river and back up a steep hill.  However, Charles E. Tilton — who built the arch — lived in a house atop the opposite hill, next to what is now Tilton School.  (The school buildings originally housed a Methodist college.)

According to some Tilton historians and lots of local residents, the Tilton School — including its library — has several ghosts.  However, I didn’t have time to verify those tales.  (Update: The library is supposed to be the most haunted building on campus.  It’s the former home of Charles Elliott Tilton… the Arch builder.)

The second version of the Tilton Mystery Tunnel story says that at least one tunnel leads to Hall Memorial Library.   That makes a little more sense, since the library isn’t far from the tunnel entrance near the arch, and it’d be a fairly straight path underground.

My recent research suggests that the brick room was built to support the gas production that fueled the lights around the park.

The metal tube leading from that room towards the surface confirms that as a likely explanation… but only for that room.

The adjoining tunnels are still a mystery.

In April 2011, Lesley Marden and I spoke at the haunted Hall Memorial Library, and — together with Sean Paradis, we investigated the library’s basement.  A memorial plaque in the Children’s Room caught our attention, as it seems to have unusual energy.  We found a slight, repeating EMF spike there (could be normal) and a minor (but notable) cold spot, as well.

In a locked storage area in the library’s basement, we detected residual energy.  At the time, I said it was from a female entity who was hiding there, fearful.  Abuse was in the story, but it seemed vague… perhaps even imagined.  Something didn’t make sense.  The imagery was faint, even for a residual energy haunting.

Later, I learned that a former head librarian had severe agoraphobia — so bad she sometimes locked the library doors and hid inside — and had died tragically, nearby.
More importantly, I saw some odd brickwork in the library’s basement.  It could indicate a tunnel entrance — or part of one — now sealed.  Frankly, the brickwork seemed more like an oven or some kind of vents, but it’s difficult to tell.  This anomaly only partially supports the idea that the Tilton Mystery Tunnel led to the library.  I’m not convinced that it did, though I have no doubt that the library has ghostly energy. If you’re in or near Tilton and Northfield, New Hampshire, be sure to drive an extra half hour to Franklin (NH) where Webster Place has some great haunted locations.  In general, you’ll visit that street during the daytime.

In October 2010, I reported on the ghosts of the Franklin Historical Society, and the violent history of its surroundings.

The Webster family cemetery is at the end of the road, on private property.  Check the permission sign before driving down the dirt road to the cemetery.  The cemetery seems normal enough, but it’s one of those locations that’s just a little too quiet.  I should have heard squirrels, birds, and the sound of cars from the busy road at the other end of Webster Place.  Instead, it was eerily silent.  On the other hand, maybe it was just an odd time of day when I visited. 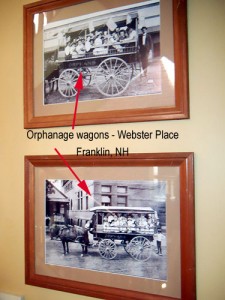 Next door to the Franklin Historical Society (see my earlier article), a private rehab center now occupies what used to be a convent and orphanage.  For the privacy of its staff & residents, that building is not open to the public.  However, from several people who’ve stayed there, I heard the following ghost story:

Many nights (or early morning) at about 3 a.m., people hear the whoosh-whoosh sound of the nun’s robes and footsteps on the floor.  They’re not going to the chapel (which is a wonderful retro design, like stepping back to the mid-20th century)… they’re going to the dining hall.

According to the stories, the dining hall has cabinets and drawers.  On many of the drawers, there are little labels, one for each nun.  That indicates where each nun kept her own silverware and dishes for mealtime.

There are other ghost stories at that location, related to the orphans who used to live there.  The photos on the walls are charming, nostalgic and — for me, anyway — a little sad & creepy.  I’ve posted a couple of them next to the dining & lodging section, below. 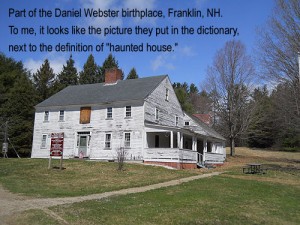 While you’re in Franklin, if you don’t mind more driving, follow the signs to the Daniel Webster birthplace.  I didn’t have time to investigate it, but it looks very creepy to me.  Something about that house and other buildings on the property… they’re odd… good odd, for paranormal research.

(As I’m editing this article, six months later, even the photo gives me a chill… and it’s 81 degrees out.)

As the stories were told to me, most of the ghost stories are connected with the small Colonial building next to the birthplace house.

That may be true, but my first choice would be to investigate the big white house in the photo below.

If you’re visiting Tilton, NH and want to stay in a haunted hotel, I recommend the 1875 Inn.

The 1875 Inn was featured on Ghost Hunters.  It’s charming, convenient to the Tilton Arch, and receives great reviews from guests and paranormal investigators.

Nearby, I love the cabins at the Lord Hampshire inn, on the shores of Lake Winnisquam.

If you’re willing to drive, check out The Spalding Inn, Whitefield, NH.  It’s over an hour away from Tilton, but for a memorable stay in NH, I’d choose the Spalding.  For several years, it was owned by Jason Hawes and Grant Wilson (and their families) from the Ghost Hunters TV show.

I’ve spent the night there (and slept soundly) and investigated at the hotel and its carriage house, several times. In my opinion, it’s very haunted, and may have some crypto-type activity, as well.  I highly recommend the Spalding Inn… if it’s open and you don’t mind the extra drive.

If you’re looking for a good meal in Tilton, the 1875 Inn features a restaurant that seems very popular with visitors and locals.

Locals and tourists always stop at the nearby Tilt’n Diner.

During the summer months, the Dipsy Doodle in Northfield — just a few blocks south of the Tilton Arch — is legendary for their seafood, burgers, ice cream and more.  I’ve also heard good things about Tilton Pizza, on Main Street, not far from the Hall Memorial Library.

For healthy snacks, locally made crafts, and great conversations, visit Gemini Health Emporium on Main Street.  The hardware store next door is also worth seeing; it’s like stepping back in time.  (There’s a cafe across the street — I can’t think of the name of it, but it’s the only one nearby — and it seemed to be enormously popular for breakfast and lunch.)

And, if you’re in town anyway, practically everyone stops at the outlet mall in Tilton, just north of downtown on Route 3.

This is the first of two articles (and podcasts) about ghosts of New Hampshire’s Lakes Region, based on my research shortly before October 2011. The second article – and longer podcast – is with my article Laconia, NH’s Ghostly, Haunted Places. 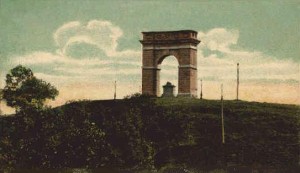 *This is the first in a series of podcasts based on locations I scouted during 2011 for a ghost-related TV series.  I was not under a non-disclosure agreement (NDA).  So, I’m able to share my research here.