New Hampshire (USA) is a gold mine of haunted locations. I discovered several in 2011, around Tilton and Laconia. (My previous article and podcast – about Tilton and Franklin, NH – are at Ghosts of Tilton’s Mystery Tunnels and Webster Place. 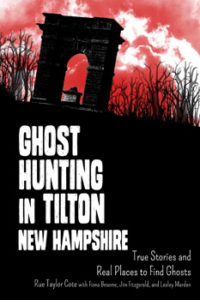 Scouting locations for a TV show, I found – and investigated – a series of great haunts in or near Tilton, New Hampshire. (Tilton may be best known for its outlet mall, the Tilt’n Diner, and the haunted Tilton Inn where Ghost Hunters filmed an episode.)

Among the most interesting haunts:

(Several of my stories were included in Rue Cote’s book, Ghost Hunting in Tilton, New Hampshire.)

Here are the locations I found in Laconia and vicinity.

[Want to listen to this article, instead of reading it? Here’s my (slightly rambling) 27-minute podcast from Halloween 2011. It includes details of how I found these locations and what was there. You’ll also learn tips that can apply to finding “hidden” haunts in your area.]

Laconia turned out to be a gold mine of weird stories and possibly haunted places.

My Laconia adventures started when people learned that I was scouting locations.

Almost immediately, I was invited to tour a private residence and hear its history.

It was startling. If I were to list all the things I look for in a haunted house, this home ticked most of them. 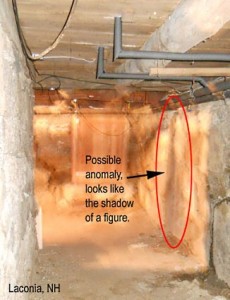 From the start, I saw evidence of the home’s Colonial history. In the kitchen, I climbed down to a room that had been part of the Underground Railroad.

In the basement, I saw – and photographed – a shadow figure.  (You can learn more about the basement, at my 2018 article, Photos from the Haunted Laconia House.)

We checked every possible explanation for the figure, and found none. And, while I watched, he walked away… and vanished.

Then, climbing stairs to an attic, I saw hash marks walls and the inside of the door, indicating that someone had been locked in, up there. (That’s a photo of it, below. From the number of hash marks, someone had been up there a very long time.) 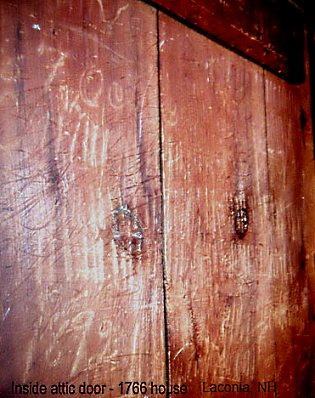 As if that weren’t enough, the owners told me about the petrified bodies that used to be in their backyard. (The bodies had been dug up and moved to downtown Laconia.)

The wife explained that “something” seemed to be in the backyard, at night, so she sometimes went outside with a shotgun… just in case.

However, the owners of the home assured me that they had no ghosts. Absolutely none.

I still don’t know what to think of that. From what I saw and heard, there’s no way that house isn’t haunted.

The next day, I returned to that area and found several other sites worth investigating:

If you’re looking for the petrified bodies, they’re in the Folsom graves at Laconia’s Union Cemetery (between Garfield and Academy Streets).

If I’d had more time, I’d have scheduled nighttime investigations at some of those locations. However, my schedule was already overloaded.

My point is: you may have a large number of haunts in your area, but don’t realize it. It’s easy to assume that nothing familiar to you is haunted.

Even if you don’t live in New Hampshire, here’s how to find similar haunted locations:

1. Ask people if they know any local, haunted places.

2. Follow your instincts.  Drive around, look at maps, and — psychic or not — pay attention to your “gut feelings.”

3. Research history! Look for patterns — geographical or historical — that connect locations that seem odd to you.

4. Ask more questions.  Collect more stories. Research anything (and everything) that holds your interest.

No matter where you live, you’re probably within a few miles of a great, haunted location.