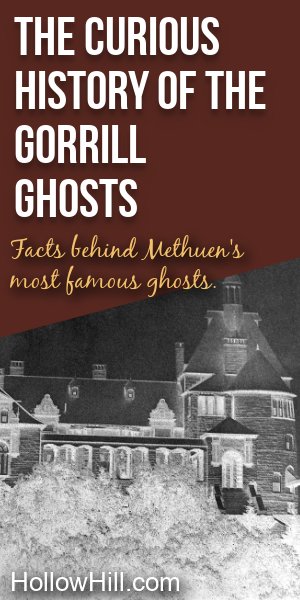 Tenney Gatehouse and Greycourt Castle – today, the Methuen Museum of History – is known for its many ghosts.

Two of them seem to haunt the property behind the main building.

They’re the feuding Gorrill brothers, and they may still be searching for a disputed buried treasure.

Here are the facts.

The family moved to Methuen, Massachusetts, in the mid-19th century.  Nathaniel Senior’s father – the late Major Nathaniel Gorrell (1734 – 1821) – had owned land there.

The Gorrell family – who later spelled it Gorrill – established their homestead “on Daddy Frye’s Hill near the Castle,” according to a 1937 book.

And Then the Lies Began

In the 1860 census, the story takes an interesting turn.  Instead of being 44, Mark reported his age as 40.  Following his brother’s lead, Nathaniel claimed to be 36 instead of 39.  Both remained single.  Both still lived at home.

In the 1860 Methuen city directory, all three men in the family were listed with an East Street address.

By 1870, the brothers had recovered their maturity – or at least reported their ages correctly – and had acquired a housekeeper, Kate Robertson from Maine.  Perhaps she was the woman they fought over?

Alas, by 1880 they were on their own again, and left the “relationship to head of household” line conspicuously empty.

In 1900, their names weren’t in the census index.  According to the stories, they died within a couple of years of each other.

In 1909, the question of bonds resurfaced.  The estate of Mark S. Gorrill said that his bonds were missing.

Despite several later claims regarding the missing treasure, no one has firmly established what happened to both Nathaniel and Mark Gorrill’s fortunes.

If the Gorrill brothers haunt Tenney Gatehouse – at least the hill behind the Methuen Museum of History – they could be looking for the lost treasure… and still feuding.

My Methuen investigations suggest layers of hauntings, representing many power struggles at the Tenney site. I believe the Gorrill brothers are just two of the ghosts that linger there.

YOU MAY ALSO ENJOY:

Massachusetts: a guide to its places and people (1937)

Trivia: Charles H. Tenney is not the only Tenney linked to a tale of hidden treasure.

According to an 1888 story, John L. Tenney (b. 1855 in California) — then living in Catron County, New Mexico — was visited by a cattle driver named John Brewer.  Brewer was one of the few survivors of the “Lost Adams Diggings Curse,” and told his story to John Tenney.  (That legend was the basis of the Gregory Peck movie, “Mackenna’s Gold.”)  For more information on that buried treasure, see Wikipedia.