Greycourt Castle (or Grey Court Castle) was the estate home of Charles H. Tenney, his wife Fanny, and their son Daniel G. Tenney.

The castle-style mansion was built in the 1880s and used as a summer home by the Tenney family.

As I explain in my book, Ghost Hunting in Haunted Cemeteries, we’re always looking for any of four characteristics of most hauntings:

If I see more than one of these elements, it’s a red flag that suggests the site is worth investigating.

In my earlier article, History of Tenney Gatehouse, I described Greycourt Castle’s intriguing and tragic past.

From the land’s connections to a Colonial blockhouse, to the fire that destroyed Greycourt in the 1970s, the site’s history contains all four elements — money, power, drama and tragedy — that make it a prime location for paranormal investigations.

My “gut feeling” is that we’ve barely scratched the surface on the energy and ghosts around the Greycourt Castle ruins.

The nearby Searles site is certainly worth investigating, as well.

I did not spend time at the area where the monks’ graves were rumored to have been. (The graves were moved when the site stopped being used by the order.)

Earlier in the evening, I’d heard that some people had formed a circle to summon the energy or spirits from any remaining graves.

Unless you really know what you’re doing, that can open doors best left closed. Even with the best of intentions, this can create unhealthy dynamics with the spirits.

So, I rushed past that area.

Walking up the path from the gatehouse to Greycourt, I immediately took a photo where I feel intense energy from… well, I think it’s the Gorrill brothers.

(For their story, see my article, Tenney ghosts – Gorrill brothers.)

Though my photo shows only a vivid orb (sorry, no landmarks with it), that confirms it as a location for additional on-site research.

The orb may be something entirely normal… but it might not.  It’s a little too solid looking for a typical “ghost orb.” The shape is too perfect for it to be an insect, and there’s no solid-looking dot inside the orb to indicate dust, bugs, or pollen.

Whether that’s a legitimate “ghost orb” or not, I’m interested in this part of the Tenney property.

As I continued to Greycourt Castle, I felt the familiar sense of entering an area with very different energy, as if it’s a portal to another time.

The castle feels like something incomplete… in our world.  However, I often feel that the stairs leading down from it actually show more than just a great view of Methuen (albeit blocked by trees).  I feel that it may offer something else, if you have patience, suspend disbelief, and use all of your senses to perceive what’s really there.

This is the second time I’ve smelled the vanilla-like aroma of tobacco around the stairway, too.  (I describe it as a little like Swisher Sweet cigars.  Others have made reference to pipe tobacco.)

During this October 2009 investigation, several other people have commented on that aroma as well, not knowing that I was already aware of it.

My photos from nearby showed some great lights, blurred as the camera moved, but nothing paranormal.

However, one of my next pictures caught an odd, colorful mist.  Someone else commented on her mist photo, around the same time.

We both tried to replicate the mist by breathing near the cameras lenses as we took additional photos, but couldn’t duplicate the effect.

Though this still may be mist (it’s not cigarette smoke), it’s more likely an anomaly.

In the photo at right, that’s a tree on the right, surrounded by the mist.  At the lower left, you can see the promontory where the stairs lead, and where I feel that the energy is different from “normal.”

Though city lights interfere with night photos, and there’s nothing obvious there to see… I still feel that’s a location for in-depth investigation.  But, because that could be something frightening, I’d only recommend it for very experienced ghost hunters.

(By “frightening,” I don’t mean that it’s necessarily dangerous. I think that it might be something very different from what we usually encounter at haunted sites like this.  Perhaps “startling” might be a better word, but when something radically different happens at haunted places, beginners can interpret it as scary, frightening or dangerous.)

Next, I walked along the corridor.  None of my photos showed anything unusual. 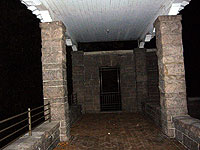 However, I kept noticing moving shadows on the columns as I stood and took pictures.  The shadows were very crisp and well defined.  It was as if someone was immediately behind me.

Every time I turned to look – at least four or five times – no one was there.  Since there were only about four of us at that part of the ruins at the time, I don’t have any explanation for it.

I wasn’t afraid of the shadows, and I don’t think they indicate anything malicious… just odd. 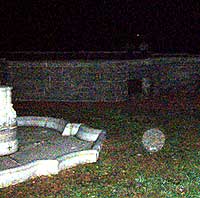 Nearby, the area around the fountain seems very active, but with happier energy.  Generally, I connect this with the “flower child” energy that may have resonated with earlier, Spiritualist activities at the site.

Or, it may relate to the ritual energy in a nearby wooded area.

Though the woods feel somber and even creepy to me, the energy around the fountain seems joyous.  I wasn’t at all surprised to see an orb in the photo at right.  In fact, I was amazed that I didn’t have more anomalies in the pictures I took there. 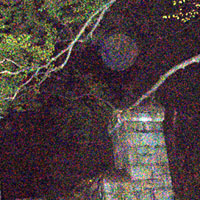 On the walk back from the ruins, I was – as usual – intrigued by the Searles’ property and stone buildings.  That location also contains very powerful, paranormal energy.  That’s the only way I can describe it; it doesn’t feel like anything that’s from this world.

However, my “gut feeling” is that it’s not just the ghost of Mr. Searles.  I’d fully expect cryptozoology reports there, because – in addition to something vaguely ghostly – there’s… well, something else.

A second photo included some lines that I’m still studying.

Everything else – full depth of field – is in focus.  If the camera moved enough to create those lines, other objects should be blurrier.

Of course, it helps that the area by that stone wall feels unsettling.  It’s the kind of site where we often see apparitions.

Yes, this is probably a perfectly normal photo, and it may be an insect (and lens flares) or falling leaves.

The earlier orb picture may be an insect as well.  I’m displaying them because they’re interesting, not necessarily paranormal.

When we look at odd things in photos from haunted places, we’re not just asking if an orb or blurry shape is an actual ghost. (We’re not sure what anomalies actually are.)

Instead, we’re asking, “Why does this photograph show insects, dust, or lights in this photo… but they’re not in other photos taken at the same time or place?”

No matter what you think of these photos, Tenney Gatehouse and Greycourt Castle ruins are worth investigating.

For a first-time or casual ghost hunter, Tenney Gatehouse is the ideal place for an investigation.

For an experienced investigator, I think the rest of the Tenney property offers more intriguing energy and anomalies that haven’t been reported yet.