It may not be as haunted as nearby Langham Creek Bridge, but it’s worth investigating anyway. 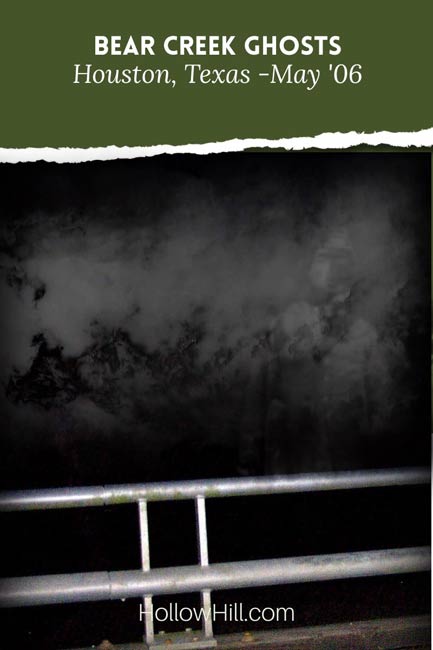 At Bear Creek Bridge, we’ve heard the tapping on the outside of the car.

During several other visits, we’ve seen the “sparkle” effect when we’ve taken flash photos. Psychic members of our team sensed energy there, as well. (See our May 2005 reports.)

With the Texas Paranormal Society, we visited Bear Creek Bridge in May 2006. We did not hear the tapping sound this time.

However, the visual anomalies were stronger.

In fact, we felt that the park was far more haunted than during our previous investigations at Patterson Road. More recent reports suggest that’s been a trend over many years.

In May 2006, most of our photos showed minor orbs on the south side of the bridge, and a few other anomalies. All of them had to be discounted due to fleeting mists that night, as well as flying insects.

The sparkles were extraordinary on this evening. The effect was probably enhanced by the bugs, but it’s easy to tell the difference between bugs in real life, and in photos.

For example, that’s definitely a bug – probably a moth – in the Bear Creek photo at right.

Because there were bugs when we were researching, we discount any orbs that look questionable.

(If the orb isn’t a perfect circle, or if it seems to have a solid mass near the center, it’s probably not paranormal.)

In this case, it’s clearly an insect.

Tip: If you’re ghost hunting after dark and any street lights are near, study them for a few minutes. Many insects are drawn to light, and you’ll be able to see them in front of any lamp or street light.

Not sure? Turn on a flashlight and prop it, pointing slightly up, on the ground. Then, walk away, at least a dozen feet. After that, wait and see if the light attracts bugs.

If you see bugs there, they’re probably in your photos, as well.

Orbs at a ‘hanging tree’? 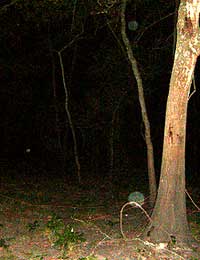 In this next photo, minor orbs seemed to linger around one tree. It’s the wrong shape to be a ‘hanging tree’, but it had that kind of energy around it.

Though the nearest Civil War battles occurred at Sabine Pass and in Galveston Bay, soldiers did march in this area.

Something happened near this tree. The orb isn’t much, but the other, related psychic evidence was compelling.

Our EVP indicated activity, as well.

Most legends related to ghosts in that area describe soldiers who deserted their comrades and were caught… and then hung as traitors.

The area deliberately flooded after the Galveston Flood has its own ghostly history, and those spirits may lurk in the wooded areas of Bear Creek Park.

Nearby, “blue light cemetery” is famous, as well, but not as accessible.

The side of the road slopes steeply, but there is room to park parallel to the road, just off the pavement.