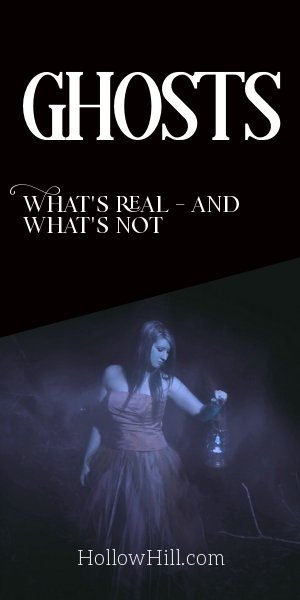 Regularly, I’m contacted by someone who describes something too extreme.

They’re describing multiple issues at one location. Or experiences straight out of a really bad horror film.

If I reply to the person — and I generally don’t — the email usually bounces right back to me.

I take my research very seriously. Others’ “pranks” take time from those who genuinely need my advice.

Now and then, the email is real. The following is edited from one of those, and it had been left as a comment at this site, too:

My roommate and I need help. We have lived in the same apartment for 8 years and 6 months ago we have been seeing some very strange things in our apt. that is scaring the hell out of us and we are in need of help. Dark shadows, knocking (loud) at our front door when no one is there. Cold spots, too.

We are currently looking for another Apt, but things are getting bad by the day. Our animals are getting scared and one died last week. The dark shadows are the worst, extremely frightening!

We are looking for ANY advice as to how to deal with this until we move. HELP!

There are many other things going as well, doors that do not have keys locking themselves.  We cannot sleep well due to fright.

Whatever is going on is taking a severe toll on us and our animals. Do you have any suggestions on how to deal with this?

Here’s a lightly edited version of my reply to Scott:

You’re describing too many problems in one location.  Either this didn’t actually start six months ago, or something normal is involved… like a neighbor is using an appliance that’s leaking EMF at a very high level.  That’s one of the first things I’d check.

However, check for carbon monoxide, as soon as you read this.

If you don’t have a carbon monoxide detector, see if it’s required in apartments where you live.  (Many states require them in all apartments.) Maybe your landlord needs to install one.

Otherwise, get to Home Depot or something and buy one today. A cat dying could be a big warning.

The variety of events you’re talking about… those might happen at places like The Myrtles Plantation or Tudor World.

They don’t happen in normal homes or apartments. Those things don’t happen out-of-the-blue, either… not unless someone was idiot enough to summon something dark.

If the latter is the case, you need to get help from a demonologist or at least a priest or minister.

Otherwise, some or all of what’s going on is probably caused by something normal… and possibly several things that are stacking to look frightening.

I’m posting this here because many of us are hearing stories like these from people who are frightened.  Due to the popularity of ghost-related TV shows, they leap to paranormal conclusions instead of methodically checking for normal explanations, first.

My earliest edition of Is Your House Haunted? was written for cases where people think their home is haunted, especially if they’re experiencing multiple kinds of phenomena, or one that’s particularly dramatic.

In it, I explained, step-by-step, how to debunk typical symptoms of a haunting.

Those steps include checking for carbon monoxide, and uneven floors (and windows, and doors) that could explain disorientation.

Infrasound could be a factor, but – depending on the ghostly phenomena – I’d probably check the attic and walls for evidence of animals living there. Their noises can seem very strange. Add the potential for health risks – not just allergies – and animals can be an urgent concern.

Of course, there are other steps to take, but those are the kinds of steps you – or a team of ghost hunters – should take before doing an investigation that focuses on ghosts.

The person who sent me that email may be in mortal danger if carbon monoxide is involved.

If there’s any chance that you are in danger – of any kind – stay with a relative or a friend while you sort out what’s really going on.

Once you, your family, and your pets are safe, start checking your home for the most dangerous problems.

If animals are sick or dying, the first thing to check is carbon monoxide… and do so, today. That has no color or odor and it kills people, too.  At lower levels, people are operating with low oxygen levels and can imagine all kinds of things.

Less immediately dangerous, but still an issue: Elevated EMF can make animals and people sick, and the effects can be very bad if the person or animal is sleeping where the EMF is highest.

EMF is one of the EIFs — an abbreviation for Experience Inducing Fields — that cause very normal people to think paranormal and scary things are going on.  Geomagnetic fields and infrasound can do the same thing.

Once people start sleeping badly or losing sleep altogether, their heightened sensitivity can make ordinary (but odd) things seem sinister.  That leads to even more anxiety and less sleep, and it’s a vicious cycle.

Or, it’s possible that you have a few normal (and perhaps dangerous) problems, and an obnoxious neighbor heard about this and is playing pranks to make things worse.   (I don’t want to add paranoia to the mix, but… well, now and then someone truly stupid thinks it’s okay to be a practical joker.)

This is what’s real:

In haunted places, a single “symptom” may emerge overnight, but it’s not likely to be anything big:  People may notice shadows moving in the basement.  A cold spot may begin to emerge in a room where it can’t be explained as a draft.  Poltergeist activity (objects moving or unexplained, odd noises) begins in the kitchen or bath.

It’s very low-level.  People notice these things, and may or may not be alarmed by them.  They look for normal explanations, or at least explain them (to themselves) in a normal context:  My eyes are playing tricks on me.  It only seems cold there because it’s warmer by the radiator.  The cup didn’t really fly across the room, it just fell and had a lot of momentum.

From there, the range of activity may increase, but it’s usually a case of one or two phenomena increasing:  People see more shadows.  The TV turns itself on & off more often.  And so on.

The process usually takes months, and sometimes years, to increase.  It’s not overnight.

Unless it’s a profoundly active location, you won’t find cold spots and animals dying and doors locking themselves and loud knocking, etc.

The one exception is if someone (usually a few people) actually summoned something dark.

I tend to use words like “amazingly stupid” when a client admits to that.

By now, most ghost enthusiasts know that Ouija board can cause continuing, scary and even dangerous paranormal activity.

Yes, it’s vital to get help in that situation. It can be life-threatening.

Meanwhile, I warn people not to try Ouija boards “just for fun.”

You get what you ask for.  Don’t open doors you can’t close. And don’t be arrogant enough to think you can handle anything you might summon by mistake.

You can’t. It’s that simple. And that horrifying, if you’re the victim.

If you feel that you’re in danger, get out of there.

Stay with a relative or friend for a few days.  That’s all you’ll need to determine the actual level of danger, and perhaps its causes, too.

Check very normal reasons for what’s going on.  Do that first.

Begin by keeping a journal of what’s going on.

My book talks you through “troubleshooting” steps, but you can also call a good handyman or contractor.  If he (or she) has a broad background in home repairs, he can probably identify and fix what’s wrong.

Once you’ve ruled out what’s normal — or if this started when someone thought it was “fun” to summon demons — it’s time to address this from a spiritual and/or paranormal view.

However, few very haunted homes have cold spots and noises and doors locking themselves.

Animals don’t usually die there either, unless they were very sick or elderly. (In other words, that tragic loss has nothing to do with ghosts.)

It’s vital to analyze the situation objectively, and explore every possibility, starting with what’s normal… especially if it’s dangerous.

But, if you think you’re in danger, even if you’re concerned that people will say “it’s all in your imagination,” get out now.

It’s easier to assess risky situations from a distance.