Frank’s Box is a device optimized by Frank Sumption, sometimes described (but not by Mr. Sumption) as “the telephone to the dead.” 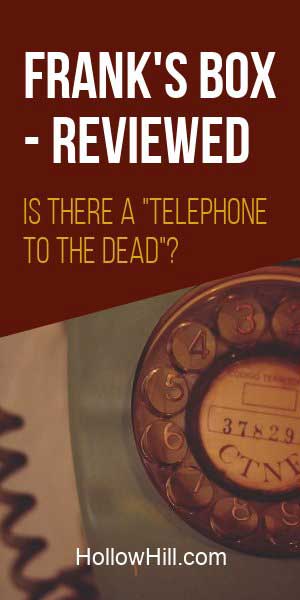 Frank Sumption wasn’t the first to work with this concept, but his results are among the most impressive so far.

Others have tried variations of this concept — a radio receiver that scans a wide range of stations, “grabbing” snippets of sounds and words, to form messages — with some success.

(The popular “Shack Hack” was one attempt, but – as some designed it – it lacked the clarity or durability of its higher-quality counterparts.)

Frank Sumption – now deceased – seemed to make “Frank’s Boxes,” one at a time, and no two looked the same or produce identical results.  (The photo with this article is symbolic.  As far as I know, no Frank’s Box looks like an actual telephone.)

I read the EVP-ITC list online for several months, and I exchanged correspondence with Mr. Sumption, but — even — I’m uncertain of what was (and still is) going on.

I tend to take things at face value and… this seems to be a fairly complex subject with conflicting opinions.

(There’s been a lot of static on the EVP-ITC list, due to very vocal skeptics.  That said, I have heard recordings on that list that claim to be genuine and — if the recordings truly represent what a Frank’s Box can do — they’re groundbreaking.)

I haven’t worked with a Frank’s Box myself.  If and when I do, I’ll happily provide a review.

(Authentic Frank’s Boxes are very difficult to find in the wild, and I’m not sure how or why Mr. Sumption decided to offer them to people. I know both genuine researchers and questionable personalities who own them.)

For now, I try to keep my critical thinking skills engaged, and remember that absolutely anyone can fake “results” to support or dispute what others are saying.  Particularly if money is exchanging hands… well, as the TV show used to say, “Be careful out there.”

However, it would be impossible to mention what’s popularly called “the Frank’s Box” without talking about Christopher Moon’s work.

Chris Moon is a paranormal researcher. He was the founder of the controversial magazine, Haunted Times, now out-of-print.

Chris’s successes with the Frank’s Box brought the device to the attention of serious investigators.

From my personal experiences on investigations with Chris, I’m certain he can achieve remarkable and authentic results with the Frank’s Boxes that he owns.

Here’s a video that speaks for itself. Listen to the voices. Watch the video screen on the box. Also note the composition of his audience. Weigh all of those points, carefully.

Maybe Chris’ success is due to his own gifts as a medium, as opposed to the device he’s using. That may be the best explanation.

Other than that…? Well, at the time I met him, and shortly afterwards, I saw some big red flags related to his business practices. Though I believed what I heard in two sessions with Chris (and a Frank’s Box), he then made a statement that made me uneasy.

I later learned that he’d made the same statement (not sexual, btw) to another woman in my age range. Comparing notes, we each raised an eyebrow.

I want to like Chris… but – as of December 2018 (eight years after writing the original version of this article) – I still don’t feel confident about trusting him.

That said, I am convinced of the authenticity of what I heard when he was using an actual Frank’s Box. (Emphasis: What I heard, not necessarily what he interpreted the box saying.)

The credibility of Frank’s Boxes open doors even wider to problems we already have in this field: Charlatans and con artists.

People can be very vulnerable when they’ve lost someone dear to them, or have fears related to death.

After all, if you could pay a certain fee or fulfill a request, and you could talk directly with someone on the other side — via a “telephone to the dead” — well, I think most people would.

Would a Frank’s Box work in the hands of an unscrupulous medium?  I’m not sure.  I haven’t seen anyone except Chris Moon use one.

When I spoke with her, she insisted that Frank’s Boxes aren’t reliable for ghost research. She said that a Mini-Box is a better choice.

The problem is: when a researcher tells me one lie, I’m uneasy trusting other things they say. And, during the same lunch conversation where she & I discussed Frank’s Boxes, she told me something that – later – turned out to be untrue.

So, I’m not sure a Frank’s Box would speak to her, or that alternatives are much better. (When I mentioned her name to Frank – while he was still alive – he was very bitter about his experiences with her.)

Frank passed away some time ago, before he had a chance to give me one of his Frank’s Boxes. I regret missing that opportunity.

TRY IT AND SEE?

Until I’m more confident about these kinds of devices, I recommend experimenting, yourself.

Try every real-time communication device that you can. (Borrow them, or spend time with someone who owns one. Do not spend money you can’t afford to lose, on devices that may not work.)

Compare your results at home (or at any single, stable location) against results at “haunted” sites.  Frank Sumption seemed pretty adamant that the box works anywhere you have it. He’s said there’s no point in taking it to a “haunted” site.

From what I’ve seen, a Frank’s Box can be remarkable.

Is it always…? I have no idea.

I am 100% convinced that it can work in the hands of Chris Moon.

If you’ve had experiences with a Frank’s Box, especially if you’ve used one yourself, I hope you’ll leave a comment below.

Read Next: Ghost Boxes – Where Do the Words Come From?

Here’s one video showing how to create a “Shack Hack.”

Here’s one about working with a Thompson RT222