It’s embarrassing even to tell this story, because there are probably logical reasons for what happened.

It started at Blood Cemetery 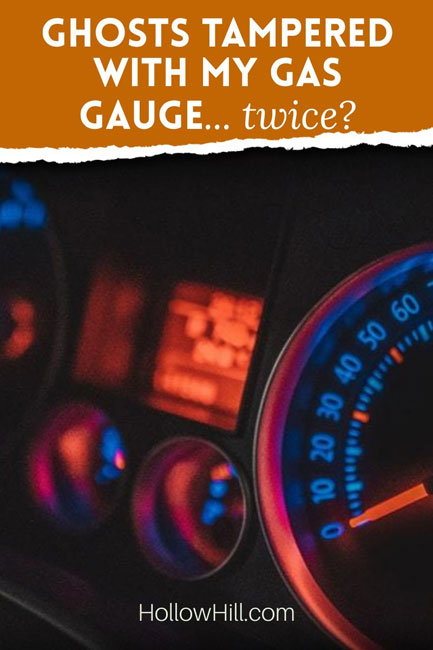 On Thursday, 14 Oct 1999, my kids and I brought a friend to visit haunted “Blood Cemetery” (real name: Pine Hill Cemetery) in Hollis, NH.

The cemetery was about ten miles from my house, so I didn’t stop for gas because my dashboard gauge showed over a quarter tank of gas left.

That should have been enough to get to Blood Cemetery and back again. And, as it turns out, it was, but…

We took Route 130 into Hollis, turned up Nartoff Road. That’s where the dashboard light flashed that means “buy gas soon.”

The light blinked off, but came on again about a mile from Blood Cemetery. This second time, it was the steady light which means “buy gas now.”

With a car full of people, I was a little alarmed, but didn’t mention it until after we’d visited the cemetery.

I said that we needed to stop for gas on the way back, and mentioned the odd light phenomenon.

My friend remarked that we’d driven up a short, steep hill to reach the cemetery. That could make the fuel light go on.

I half-agreed, even though I remembered the light going on well before we started up the hill.

But maybe I was wrong. That’s what I decided, at the time.

About two blocks later, the fuel light went off.

And it stayed off while I dropped my friend near his home, took my kids to karate class, ran a few errands, and finally went home.

In other words, the gas hadn’t been running low.

I decided that it was just “one of those weird things” that’s not worth fretting over.

But then… it happened again

On 17 Oct 1999, I returned to Blood Cemetery for photos. It was late in the day and I was by myself.

This time, I had well over a quarter-tank of fuel, so I knew I should have no problems with the fuel light. 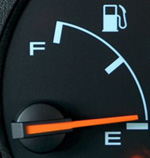 Once again, about a mile from the cemetery, the fuel light came on.

It was the bright, “buy fuel now” light. Since it was getting dark and the cemetery is on a rural road, I did not even slow down as I passed the cemetery, but drove straight to the gas station.

Once again, about two blocks past Blood Cemetery, the fuel light went off. And it stayed off.

Not wanting to take any chances, I drove to the nearest gas station and filled up. The car needed barely half a tank of gas.

Nearly ten years later as I’m updating this webpage, I can report that the gas tank lights have never again misled me. (I’m still driving that same car.) But, there may be logical explanations for what happened.

My advice: If you go to Blood Cemetery in Hollis, be certain your fuel tank is filled before you leave the main roads.

During the week when I first wrote this summary, a van was parked across the street from Blood Cemetery. A local woman commented that it was probably someone who ran out of gas or something, and left the van there until he could get back to it, later. She said that this happens often.

Maybe ghosts didn’t vaporize my gasoline or play pranks with the dashboard lights. But maybe Blood Cemetery had something to do with it, too.

If you read our other articles about Blood Cemetery, you’ll see that its ghosts have a reputation for electrical and mechanical interference.

(In fact, that’s commonplace at many haunted sites. It may have something to do with the odd EMF activity at those locations.)

Blood Cemetery, a local nickname for “Pine Hill Cemetery,” is one of the northeast’s most famous haunted cemeteries. Folklore centers around the headstone of Abel Blood, whose history offers nothing to support the tales of his hauntings.

However, this lovely cemetery – near Nashua, NH (of Gilson Road Cemetery fame) and less than an hour from Boston, MA – seems to be haunted.

I’m not sure how haunted.

To visit the cemetery, you can approach from Nartoff Road in Hollis, New Hampshire, off Route 130 (Exit 6 from NH’s Route 3). It’s an easy drive through some lovely rural landscapes. The cemetery is next to Nartoff Road near the crest of the hill. It will be on your right.

The cemetery closes at dusk and is well patrolled by the police, due to unfortunate vandalism in the cemetery.

Trespassers will be stopped; do not visit Pine Hill Cemetery after dark.

2 thoughts on “Ghosts Tampered with My Gas Gauge – Twice?”