Gilson Road Cemetery is in Nashua, New Hampshire. It’s one of America’s most haunted cemeteries.

Once an isolated and rural location, it  features apparitions, cold spots, compass and EMF anomalies, EVP, and visual anomalies that show up in photos and videos.

In other words, it’s like a theme park for ghost hunters.

Except that these are real ghosts.

Gilson Road Cemetery is on Gilson Road, on the west side of Nashua, NH (USA).

Turn left at the end of the exit ramp. Follow that road – despite how it weaves and how often the name changes – until you reach the T-style intersection at the end of it.

Then, turn right and look for the four corners intersection (convenience store and other retail) at Gilson Road.

Turn left onto Gilson Road and look for the gate and stone wall on the right, shielding the cemetery from view. 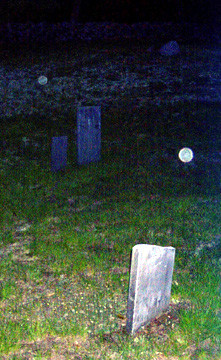 Gilson Road Cemetery probably started as a family cemetery in colonial times. According to legend, the stone wall enclosed a farmhouse. Then, the house burned and some of the fire victims were buried in a small plot near the charred remains of the house.

Another house was built on the site, but it burned to the ground, as well. Like the previous fire, its victims were buried close to the home.

After that, people gave up on the location and turned it into a rural cemetery.

Early records suggest that the Gilson Road area was the site of at least two large Native American battles. Nations from the north (Penobscots, among others) and from the south (Massachusetts, Rhode Island, and beyond) met near Gilson Road and engaged in bloody warfare.

This was before many contemporary records existed, so the stories are largely from oral tradition. Details aren’t clear.

Gilson Road is also famous for a local, urban legend. According to stories, if you walk farther up the road (heading slightly northwest) just a short distance, and shout, “Betty Gilson, I have your baby,” she will appear.

She’s described as appearing around age 30, in Colonial clothing, and some say she’s in the middle of the road. (A couple of people talked about the danger of seeing her, and steering the car to avoid hitting what they thought was a real  person.)

More people report her hiding behind a tree, occasionally peering out to see who’s calling her name. The first thing they see is her white “mob cap” (hat), and sometimes part of her face, as well as a hand grasping the tree.

Click here for a brief selection of photos from haunted Gilson Road Cemetery.