It’s easy for beginners – and even pros – to make mistakes with ghost photos.

That includes me. (Yes, really. Even now, it’s far too easy to blunder with ghost photos.)

Here are the four biggest mistakes I’ve seen in the field:

Let’s go through those four points, one by one.  They’re things I’ve learned over decades of trial-and-error research at haunted sites.

Thinking Everything Is a Ghost

We can explain some orbs. The #1 culprit is flying insects.

Those orbs are usually an irregular shape, like an oval instead of a nearly perfect circle.

Indoors or out, regularly look at lights – streetlights, flashlights (briefly turned on), and other lighting. See if any insects are swarming or flying past.

If you see flying insects, be especially aware of orbs in your photos.

Even better, have a friend (or team member) stand to the side, but a little in front of you. Have him/her look for anything highlighted by your flash, when you take the picture.

And then, be sure to note that, either on a notepad or with a voice recording.

The way to identify something that might be dust, is to see if – in sequential photos or video – it falls straight down because of gravity.

A straight line across the photo could be a camera glitch, or a flying insect, but it’s unlikely to be dust.

On a humid or rainy night, you may see several dozen orbs in your photos. If all – or most – of your photos show a massive number of orbs, maybe it’s the weather. (Just one or a few orbs that show up now & then…? They could be paranormal.)

The weather isn’t the only culprit when you see a lots of orbs, or a fine (but mysterious) mist. It could be your breath, even if the weather isn’t especially cold. (Don’t exhale until after taking each picture.)

I wish I’d known the breath issue when I took the following Gilson Road photo. I might have done some on-site debunking, right away. (Instead, I’ll never know if this was a genuine anomaly.) 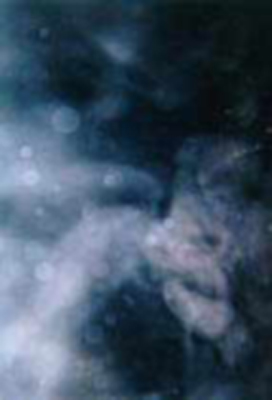 Always consider normal explanations, even if they seem a little weird at first. And test your cameras (including your phone) at not-haunted sites, to see what dust, pollen, reflective surfaces, and humidity look like.

The two worst culprits are flying insects and your own breath as you exhale. In photos, either of them can produce cool, weird, ghostly looking anomalies.

At any haunted location, it’s essential to take two to four pictures in rapid succession. Try not to breathe or move, in between those photos.

Then, you can compare one photo with another, to see what – if anything – changed. The changes might help rule out false anomalies. 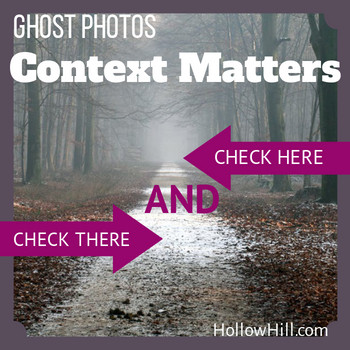 Also, be sure to pause regularly and take photos to your right, to your left, and in back of you. Later, they’ll help you identify sources of false anomalies.

(They may also show you unexpected anomalies. Not all ghosts strike a pose for the camera. Some might flee in the other direction… in back of you.)

Indoors, take photos in other, nearby rooms.

Outdoors, walk a few hundred yards away – or up the road – and take photos.

One of the big questions to ask when you see an anomaly in a photo is: Why this anomaly, at this location?

If the anomalies show up everywhere, even 1/4 mile up the road, it might be dust or humidity or insects.

If you see few (or no) anomalies anywhere else, and there’s no easy explanation… it might be a ghost.

Thinking All Orbs Can’t Be Paranormal

Many skeptics (and ill-advised investigators) insist that all orbs are dust, pollen, humidity, rain, reflections, and so on.

I know because, before I tested how likely those explanations are, I insisted we could explain most orbs. (At the time, it seemed logical.)

Yes, I was wrong.

I feel terrible about misleading people about orbs, even if it was unintentional. Please accept my apologies if I misled you.

Today, we can’t just brush them off as dust, rain, etc.

Here are a few of my test photos.

The fact is, if you set things up “just so,” you can mimic almost everything we consider paranormal. That includes:

My point is: if you’re looking for 100% irrefutable proof that something is a ghost – or that ghosts exist, at all – you’re likely to be disappointed.

For now, the only real proof is how the experience affects people, or if – in the light of day – they can explain whatever-it-was with confidence.

If your memory isn’t perfect, take notes during the investigation.

The context matters. What else was going on, when you took those photos?

Was everyone bored or unimpressed by the location?

If that didn’t change around the time you took the unusual photos, it decreases the likelihood .

However, if several things happened at once – to you, or those near you – like chills, an uneasy feeling, an unexplained noise – take your photos more seriously.

In recent years, people have relied heavily on evidence in the form of gadgets – ghost hunting equipment, usually electronic. They’ve paid less attention to their personal experiences and observations.

Or worse, they’ve dismissed them altogether.

The biggest mistake in ghost hunting – not just ghost photos – is ignoring what your own five (or six) senses are telling you.