On 17 June 2008, I was on the Ghost Chronicles International radio show as Ron Kolek‘s co-host. Our guest was Christopher Balzano, the founder and lead investigator of Massachusetts Paranormal Crossroads. The topic was Pukwudgies.

During our conversation, I summarized our encounters with something similar at Vale End Cemetery in Wilton, New Hampshire. I’m still deeply affected by those experiences, and I rarely even try to discuss them. However, I have written about those events. My story begins at Vale End – possible demons.

Our investigator’s 1999 death may have been a coincidence. However, because the circumstances were so unique and never explained to our satisfaction — and with this additional information about Pukwidgies — it’s even more important to avoid Vale End Cemetery.

On a more positive note, Ron Kolek, UK psychic David Wells (from the popular show, “Most Haunted”), Welsh psychic entertainer Gavin Cromwell, and I will be among the psychics and investigators leading the Haunted Lighthouses Tour organized by Jeremy D’Entremont on August 7th, 2008.

It will be a full day of weird and true ghost stories, and some eerie and unforgettable experiences in several of New England’s most haunted lighthouses.

2008 was a turning point for haunted Gilson Road Cemetery.

Except for a notable number of new houses and subdivisions in the area, little has changed… with one big exception.

The denser wooded area in back of the cemetery seems to provide the illusion of cover for the spirits who visit during daytime hours.

While we were there, we noted several figures moving stealthily in the woods. Most of them were about 20 or 25 feet behind the back cemetery wall.

I also saw a momentary flash (residual energy?) of a Native gentleman. He’d appeared to us in the same place – the back left corner (where there’s a break in the wall) – during a 2003 visit to Gilson.

The Lawrence headstones have remained among the most active in the cemetery. Many of our photos showed orbs. Here are two photos taken within seconds of each other:

This is a good reminder of the importance of always taking two photos, as close together as you can. (If that orb looks familiar, it’s because we’ve photographed it before. From a slightly different angle, it’s in the photo in my article, Gilson Road Cemetery – ghost orbs return 6/02.)

Who Were These People…?

Rufus Lawrence – like many people interred in this isolated cemetery – has been difficult to find in any records of the era. Despite numerous records for other members of the Lawrence (or Laurence) family, and generally good census records (at least for adult males), Rufus and others in Gilson remain elusive.

He was probably related to Samuel Laurence who married Betsy Thyng (or Tyng) and named a son Rufus in 1815. (The Rufus Lawrence in the Gilson grave would have been born much earlier. We suspect that he was from Epping, NH, and the son of – or closely related to – David & Anna Lawrence.)

We’re not sure why the people in Gilson Cemetery were buried there rather than in the old burial ground in the middle of town. (Today, that’s by the shopping center at Daniel Webster Highway near Spit Brook Road. That cemetery is nicknamed “Schoolhouse Cemetery.”)

Another note about Gilson: One of our group noticed that the back wall of the cemetery appears to include pieces of broken headstone. Look at the shapes of the stones, and – amid the usual round-ish rocks and boulders – you’ll see several slabs of stone.

If those really are pieces of headstone, we’re not surprised that the back wall of this cemetery is one of the most haunted areas in a profoundly eerie graveyard. 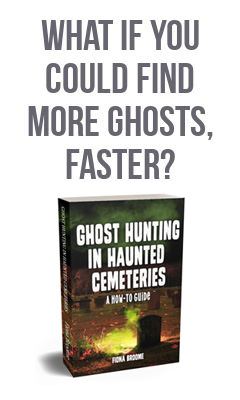 Also, outside the wall just south of the gate, we noticed several pieces of headstones, as well. We’re not sure why these suddenly became obvious, but they indicate another area for research.

As a guideline, any time you see graves, monuments, or pieces of headstones near (but outside) a cemetery, check it for anomalies.

Those are often the graves of “sinners” who couldn’t be buried in hallowed ground.

Whether or not they were unjustly accused of crimes and mortal sins, these spirits often return to haunt their remains.

Perhaps to them, being shunned after death isn’t the final word, after all.

Late yesterday (12 June 2008), I returned to Gilson Road Cemetery in Nashua, NH. Our group’s ghost hunting results were surprising. I’ll publish photos and more details, later, but here’s a summary of what we found:

We tried several kinds of dowsing rods to see what they indicated. The “hot spots” were somewhat predictable.

The Fisk graves – the oldest headstones in the cemetery – produced strong pulls on the dowsing rods. They’re the tall stones immediately after the gate, and directly in front of you. I’ve seen EMF spikes there in the past, though I can’t say that they “feel” especially haunted, most of the time.

(Note that the small Fisk gravestone is the only one in the cemetery with a death’s head on it.)

Joseph Gilson’s headstone – a low, white stone near the front center of the cemetery – is where research groups and I have noted many anomalies including paranormal cold spots. It was active last night.

Slightly northwest of the Searles’ graves (near the pink orb note on the map linked above), we found some of the most intense and unexplained activity. That’s the same area where we first confirmed that hiking compasses can work as EMF detectors.

By contrast, we noted little energy at Walter Gilson’s stone and the back left corner of the cemetery, where so many have had spectral encounters.

With two researchers using dowsing rods independently, we were able to confirm activity in several other spots around the cemetery. Most of those locations were not marked graves.

The woods behind the cemetery appear to be as active as ever. If you’re looking for a full, ghostly apparition, Gilson cemetery may be one of your best chances of seeing one. The figures generally look solid and real… until they vanish into thin air.

In fact, Gilson cemetery raises so many questions about hauntings, and it is such a reliable site, I recommend it for beginners who need research experience… if you have nerves of steel, that is.

Many psychics describe Gilson as one of the most haunted places they’ve ever visited. In addition to very obvious manifestations, the more chilling aspects of Gilson are what you sense and can’t easily explain.

But, even if you aren’t especially psychic, you may be in for a scare at Gilson.

In the past month, people have reported hearing voices so loud at Gilson cemetery, they sounded as if the person was right next to them… except that no one appeared to be there.

Several people have seen the ghostly, hooded figure that chases people out of the cemetery.

And, as usual, electrical circuitry can fail… but usually just inside the walls of the cemetery. This includes cameras that seem to jam, digital voice recorders that stop working or record unearthly sounds, and cell phones that lose signal.

Over the past few years, I’ve also received hundreds of reports about new and freshly charged batteries losing their power completely. (In groups I’ve accompanied to the site, I’ve seen that several times, ourselves.)

Even talking about Gilson can be… interesting. My software usually works smoothly, but it took six tries to publishing this article. The server simply stopped. And, even when the article finally appeared, it was missing an earlier note about the uploading difficulty. It took two more tries to add this note to our post.

Gilson Road Cemetery is still one of my favorite haunted locations.

In the summer, if you visit Gilson cemetery shortly before dusk, wear bug spray. In the warm weather, the mosquitoes are aggressive as night approaches.

Do exorcisms work? Many people wonder about exorcisms when they’re dealing with paranormal and dark forces.

The answer is yes… and no.

I never thought much about exorcisms until I met demonologist John Zaffis. I’m simply not interested in the subject of demons.

However, after a short, informal conversation with Mr. Zaffis, I was a believer. He had photos with red figures in them, eerily similar to some from my most baffling case, and he’s had lengthy experience with exorcists.

Since then, here’s what I’ve observed about exorcisms and exorcists.

From what I’ve seen and heard, the initial exorcism may only provide brief relief, if any help at all. Results improve with subsequent exorcisms (usually by the same exorcist), and it’s not unusual to require a dozen exorcisms to see lasting benefits.

It’s best not to start down this path unless you’re willing to see it through. You cannot simply walk away from an irate, vindictive, defensive demon, or a client who is dealing with one.

Exorcisms are exhausting for everyone involved.

Exorcisms often involve spirits (or Satan, satans or demons) that can drain or at least draw energy from the victim, the witnesses and the exorcist. Physical health issues can be a concern, and it can be wise to involve a medical doctor or a professional healer in the process.

Mental and spiritual health are always issues for all participants in the exorcism. Without exception, if you’re involved in an exorcism, even as a silent witness, it’s vital to take precautions.

Exorcisms rely on personal and spiritual power more than experience, per se.

The innate power of the exorcist can be vital. A person with numerous weaknesses or untested spirituality can become vulnerable during the exorcism. This is one reason why full-time religious professionals and profoundly spiritual people are usually the best exorcists.

Whether the exorcist’s skill has been acquired through training, experience or a natural/spiritual gift, the exorcist should be someone who does not falter, even for a split-second, during the process.

The most unfortunate results seem to occur when the exorcist — despite training and experience — has been worn down by his or her work, and let character flaws develop.

That said, we wouldn’t risk an exorcism with an unsupervised apprentice exorcist, no matter how superior his or her knowledge and personal character.

Looking for an exorcist? Consult a professional.

We routinely refer people to two experts in this field: John Zaffis and Pete Haviland. Even if they can’t help you, follow whatever advice they give you.

I also like both of the Johnson brothers, associated with NEAR

(If you’re a professional ghost hunter and have had positive experience with other exorcists, use our Contact form — linked at the top of this page — to recommend them.)