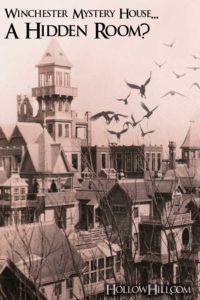 The headline says “New room found at San Jose’s Winchester Mystery House,” and the article explains, “The home’s preservation team recently opened the new room, which is an attic space that has been boarded up since Sarah Winchester died in 1922.”

But, as another article – Winchester Mystery House Pries Open Creepy Attic Room Boarded Up In 1922 – explains…

But notably, Sarah’s attic isn’t being presented in its original location — instead, its items have been spirited away to another location on the grounds. “We have relocated the ‘attic’ to the central courtyard,” a representative from the Mystery House wrote on Facebook. “

In a typical “haunted” house, if the furnishings aren’t in the original room, I’ve lost at least half my interest. 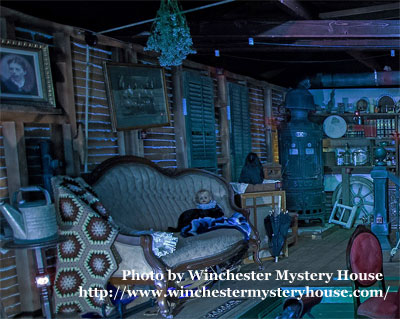 But, my past investigations  suggested that an equal amount of energy (or more) is in the walls, floor, and ceiling of the room.

Maybe that energy was absorbed from the objects. I don’t know. But, I am sure that a sealed room with its objects is likely to be more haunted than just those objects, placed in a courtyard.

To be fair, the attic room may have been unsafe or impractical to open to the public. So, moving the objects might have been the best option.

And, it probably goes without saying: the Winchester house is far from a “typical” haunted house. Its history was bizarre from the beginning.

Looking at the photo, above… all I needed to see were the old portrait and the doll. Those are two typical signals that the room is likely to have anomalies.

(I’m assuming that doll is composition and was actually in the room when it was opened. Several “haunted” sites have added dolls as props, to seem creepier. Know your doll history, so you’ll spot dolls that don’t fit the time period.)

With or without the “new room,” the Winchester Mystery House is one of America’s most enduring – and important – haunts.

For years, psychics and mediums have been sure that some of the house’s most haunted rooms were still hidden, or at least sealed. That’s confirmed by a room like this.

The Winchester Mystery House also provided evidence supporting the idea that ghostly activity – particularly poltergeists – seem to correlate with the presence of water. I think Colin Wilson was one of the first to mention that.

For about 10 years, when I heard a poltergeist report, I asked about the proximity to water. In over 95% of credible reports, water was within three feet of the activity: bars, kitchens, or bathrooms. Usually, the distance was closer to one foot.

The alternative was unexplained water that appeared on surfaces, immediately following the activity. That’s been reported at the Winchester house, as well.

Here’s a 10-minute video about the Winchester Mystery House, filmed by the “Weird US” guys.

If you’re interested in the history of the Winchester house, I recommend the half-hour documentary narrated by actress Lilian Gish, Mrs. Winchester’s House. That 1963 film is very stylish and captures the eerie mood of the site.

I’m thousands of miles from the Winchester Mystery House, so – for now – I’m unlikely to investigate at the house. (I’m finding a lot of great, weird information in books, old newspapers, and others’ articles.)

If you visit the house and can report on the activity around the new attic-related display, let me know in comments, below.