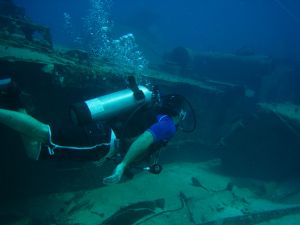 Sometimes, I’m more convinced by retracted “ghost stories” than those that get lots of publicity.

I was searching for fresh news reports about ghosts.  I use special software to filter out the stories that won’t interest me.  Then, I click on those that look interesting.

The following is a screenshot of one story that caught my interest.

However, when I clicked to read the article… it had already been removed from the WOOD-TV website.

That’s not entirely weird.  After all, it looks like the story was from 2012.

On the other hand, I’m still not sure why it showed up on my feed of recent news stories. (Cue the Twilight Zone music…?)

Generally, when I see something that looks like a publicity stunt — a news reporter “locked in,” Ghost Adventures’ style — I sigh in exasperation.  Really, guys, that’s become a cliche.  Zak and his friends can do “locked in” investigations far better than amateurs.

What made this story different is that it’s the Titanic.

Of course the artifacts from it could have eerie energy.  I’d be more surprised if this kind of exhibit wasn’t haunted.

Though this news story is old, my point is still current:

If you’re looking for creepy, haunted places to investigate, sometimes it’s better to look for reports that vanish almost as completely as the ghosts do.

Stories (and commercial sites) that shout “Look at me! Look at me!” are less likely to be the real deal.

It doesn’t take the Haunted Collector to spot a show or exhibit that could be truly haunted, and worth visiting.  In fact, if you can get to a display like this one, I recommend (discreetly) carrying an EVP recorder in your pocket, to pick up any odd messages you might hear while in the gallery or exhibit.

If you’re intrigued by the idea of a haunted Titanic exhibit, you’ll have lots of choices.  Check the Titanic Exhibitions list to find a site near you. (Personally, the Luxor would be my first choice.  That place is pretty creepy to begin with, with its massive Egyptian statues.)