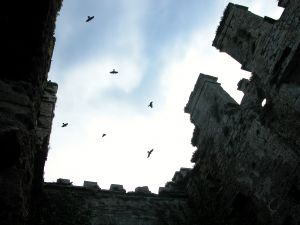 Banshees are unique in paranormal research.  The following is from an article I wrote in 1999.

When someone mentions a ghost, most of us think of cemeteries, haunted houses, and transparent figures draped in sheets.

Likewise, the word “faerie” is usually linked with cute little figures with wings, and merry mischief… like Tinkerbell.

However, mention a Banshee, and people squirm.

The Banshee, like a ghost, can represent death, but that is not her actual role in folklore or in our lives.

She can appear transparent, usually the size of a living person. Nevertheless, like her fae counterparts, she is associated with a more magical Otherworld.

She reminds us that the Otherworld is a vast place, inhabited by many kinds of beings, including faeries and ghosts.

The Banshee — in Irish, the Bean Sidhe (pronounced “bann-SHEE”) — means “spirit woman” or sometimes a spirit (perhaps a faerie) dressed in white. She is usually described as a single being, although there are many of them.

According to legend, one Banshee guards each Milesian Irish family. These are the families descended from the “Sons of Mil” who emigrated to Ireland long ago. Often, those families’ surnames start with O’ or Mac, and sometimes Fitz. Remember, many of those prefixes have been dropped, particularly by American families.

In other words, if your ancestors lived in Ireland for a couple of generations, your family — and perhaps your household — probably has its own Banshee.

There is a Banshee for each branch of these families, and the family Banshee can follow the descendants to America, Australia, or wherever the Irish family travels or emigrates.

The Banshee protects the family as best she can, perhaps as a forerunner of the “Guardian Angel” in Christian traditions. However, we are most aware of her before a tragedy that she cannot prevent.

Traditionally, the Banshee appears shortly before a death in “her” family.

The Banshee is almost always female, and appears filmy in a white, hooded gown. (The exception is in Donegal, Ireland, where she may wear a green robe, or in County Mayo where she usually wears black.)

However, if she is washing a shroud when you see her, she may merely signal a major life-changing event in your future. The way to determine this is to go home and burn a beeswax candle after seeing her. According to folklore, if it burns in the shape of a shroud, her appearance does foretell death.

The night before the death, the Banshee wails piteously in frustration and rage. Her family will always hear her. Many others in the area will, too. For example, Sir Walter Scott referred to “the fatal banshi’s boding scream.”

One of the largest reports of this wailing was in 1938, when the Giants’ Grave in County Limerick, Ireland, was excavated and the bones were moved to a nearby castle.

The crying was heard throughout central Ireland. People said it sounded as if every Banshee in Ireland was keening.

That collective Banshee wail was unusual but not unique. When a group of Banshees are seen, they usually forecast the dramatic illness — and perhaps death — of a major religious or political figure.

In Irish mythological history, the Banshee tradition may link to the fierce Morrighan as the “Washer at the Ford,” a legend of Cuchulain. In that story, the Morrighan appeared as a young woman who prepared for an upcoming battle by washing the clothing — or perhaps the shrouds — of those who would fight and lose.

Does the Banshee Cause Death?

Despite her grim reputation, seeing or hearing a Banshee doesn’t cause the death. Traditionally, the Banshee is a very kind woman. As poet and historian W. B. Yeats commented, “You will with the banshee chat, and will find her good at heart.”

Perhaps her appearance and wailing before a death are efforts to protect her family from a death. or other tragedy that she foresees.

This is the clearest link to what are popularly called “ghosts.” In many stories, the spirit appears to warn the living about danger, illness, or death. Many gothic novels feature a ghost whose appearance forecasts death.

Likewise, in the Sherlock Holmes story, the Hound of the Baskervilles howled before a family death.

In real life, my maternal grandmother and her siblings were individually visited by the spectre of their mother, to warn them of her imminent death in a hospital many miles away, and to say good-bye.

This level of concern for the living is consistent with many ghosts, as well as the Banshee.

Whether the Banshee is a “ghost” or a “faerie” may never be resolved. However, the Banshee provides clear evidence that the lines separating ghosts, spirits, and faeries are vague at best.

For more information about the Banshee, one of the best studies is The Banshee: The Irish Death Messenger by Patricia Lysaght (paperback, © 1986, Roberts Rhinehart Publishers, Colorado).

Note: Most of this article originally appeared as “Banshee – Ghost, faerie or something else” – in October 1999 at Suite 101, when I was one of their consulting editors, writing about paranormal topics.

3 thoughts on “The Banshee – Ghost, Faerie or Something Else?”