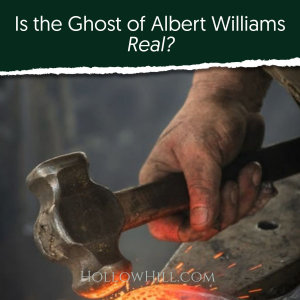 Is the ghost of Albert Williams real? Or was that a convenient fiction for a  2017 Most Haunted episode?

I expected the latter.

When I watched the April 2017 “Most Haunted” episode filmed at the Slaughter House in Liverpool, I was intrigued.

Albert Williams is a name that Yvette received from spirit, during the investigation. According to Yvette’s impressions, Albert “looked after horses.” Around 1913, he may have been pushed down the Slaughter House stairs, and fell to his death.

Was he the same spirit in the “possibly 19th century” impression received by Billy in the earlier investigation?

Or, did two young men die there, in separate tragedies?

And was the searching (and probably distraught) mother Emma, not Meg or Mary? The names sound similar and could be confusing, especially if the psychic impression isn’t clear.

It’s too early to be certain.

Meanwhile, I was not optimistic about finding a likely Albert Williams. Williams is the third most popular surname in modern Britain, with nearly 300,000 people sharing the name.

Also, the given name of Albert – often a tribute to the memory of Queen Victoria’s husband – was very popular in that era.

I expected to find too many “Albert Williams” around Liverpool.

To my surprise, a likely match emerged early in my research. In fact, this was one of those times when the research seemed too easy.

Did he want me to confirm his identity? I can’t rule that out.

Here’s the most likely match for the Albert who contacted Yvette.

“Our” Albert Williams is shown in the following screenshot from the 1901 English census. I’ve circled his name on the census page. The family lived on Anglesea Road in the town of Liverpool. (Note that, in 1901, Albert’s father was a blacksmith.)

In 1911, Albert’s father was working as an Engine Smith (engineer) for the Cunard ship line.

One of Albert’s older brothers, George, was an Apprentice Blacksmith.

(Remember, their father had been a blacksmith for most of his adult life.)

He might have worked in or near the Slaughter House location, too. It was a popular commercial area.

So, is this a match for young Albert who haunts the Slaughter House?

It’s more than likely. Here’s why.

I’ve found no records for this Albert Williams after 1911.

That suggests that he died young. Maybe as early as 1913.

Of course, there may be another explanation. Maybe I’d find this Albert Williams in later records, if I dug deeper.

Or, maybe this is the Albert Williams who died at the Slaughter House location around 1913… just as Yvette said.

3 thoughts on “Is the Ghost of Albert Williams Real? Slaughter House, Liverpool”