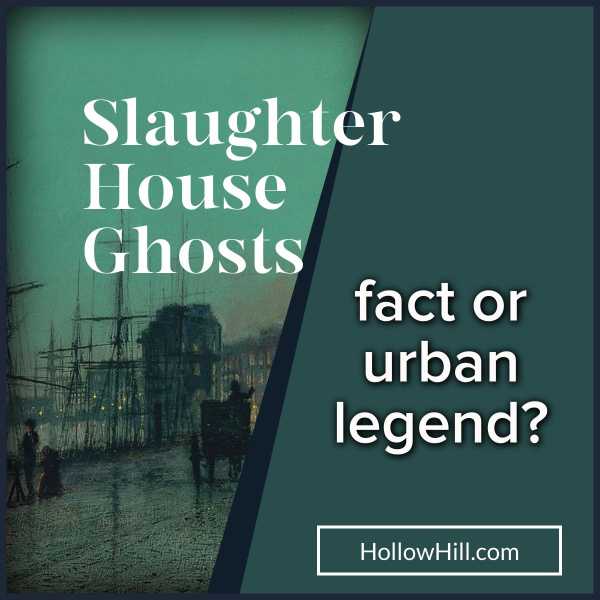 Is Liverpool’s famous pub, The Slaughter House, truly haunted? And does history support its many ghost stories?

Here’s what I found out.

The haunted Slaughter House Pub is just one of many haunted sites in Liverpool.

(The pub’s name gives me the creeps, but it’s popular with tourists as well as local residents.)

According to the Paranormal Database, the Slaughter House’s ghosts include two spirits who live in the cellar, and sometimes appear near the bar.

However, other reports suggest even more entities at the site.

So, let’s start with the obvious question… the pub’s name.

It probably wasn’t a slaughterhouse. Or… maybe it was?

According to researcher Tom Slemen, the pub was never an “abbatoir” as some were called. (Other terms included “fleshers” and “flesh markets.”)

I checked his research, and confirmed his results.

For example, I had no trouble finding Peter Edwards in the 1827 Liverpool city directory, with an office where the Slaughter House is, today. (His residence was 11 Portland Street. His office was 15 Fenwick Street.)

However, I’m not sure if Mr. Slemen studied anything before the late 18th century. (Generally, I like to go back at least to the 16th century, and as far back as the 14th – or earlier – if I can.)

Liverpool directories didn’t exist in earlier times, so it’s not an easy task.

So, Mr. Slemen’s initial study may not reflect the whole story. In fact, Alex of Auld City tours says the Slaughter House site was an abbatoir.

Until I can study this further, I’m reluctant to say it was never an abbatoir.

Note: English history goes much further back than modern records. Also, hauntings like the Slaughter House’s usually indicate a lengthy, turbulent past.

So, I cast a wide research net, and don’t rule out anything until I’ve triple-checked it.

But what about its ghosts?

Reports at the pub include the sound of a little boy ghost, hair being moved by invisible fingers, other poltergeist activity, and the sound of glasses clinking when no one is nearby.

The best description of the Slaughter House’s ghosts appeared in a 2004 article, quoted at YO! Liverpool.

Here’s some of that article:

[from the cellar] …We decide to go walkabout. On the “evil” stairs leading out, the ghostometer begins to sound uncomfortable and Billy claims he feels a presence but nothing too strong and certainly not malevolent.
…

We proceed to the top floor and it’s here, at the top of the stairwell, that Billy first detects something.

“The impression that I get here is that there was some kind of self destruction that somebody committed suicide. Somebody died in this area but it must have been some time ago. It was a man who hanged himself here.”

The ghostometer duly goes slightly bonkers emitting a fluctuating whine like that of the dentist’s drill. We head a little more quickly back downstairs where, back in the bar, it’s thought that it might be a good idea if Billy went back down in the cellar, alone this time, so as not to be distracted.

Billy, for some reason, doesn’t agree.

Minutes later Joe and I are perched on stools downstairs and after a brief surf with the divining rods – this area of the city apparently being awash with ley lines which convey psychic power – Billy has placed the ghostometer at the centre of the low stage at the far end of the room.

He then retreats to another stool on the far side where he sits occasionally stroking his chin apparently preoccupied in thought.

No words are spoken. The only sound is the warble of the ghostometer in mild distress.

Ten minutes later Billy springs up and walks over. “I’ve just been having a conversation,” he says calmly and then points at the stage.

“It’s a guy sitting over there. He says his name’s is Walter Langton. He worked here in the 1800s. He’s very rude and bad tempered and he says he wants to do me harm. I’ve told him he can’t. He chooses to be here. He also knows that we are here and he wants us to go. But I don’t feel intimidated.”

Billy then says that there is another presence on the stage. It’s a middle-aged woman dressed in grubby smock and bonnet. She’s possibly from the 19th century and called Meg or Mary. She’s unaware of us but is apparently looking for her son.

” He was crushed to death here,” adds Billy simply.

Needless to say neither Joe or I have seen or heard anything – it is, unfortunately, the drawback of the medium’s trade that concrete proof is hard to produce.

Nevertheless there’s an unnerving feeling that we’re not alone and there’s relief in finding the stairwell behind the bar – and not adjacent to Walter’s alleged spot at corner of the stage – to return to a curious Adam and co upstairs.

Because Liverpool was a very active port in the 1800s, it’s difficult to pinpoint just one likely person, even when the name is unusual.

Walter Langton might have worked at the site briefly, waiting for a ship to sail, or immediately after he arrived in England from Canada or the United States.

I found one Walter Langton, born around 1863 in Plymouth (England), who was part of the crew of a ship that docked regularly in Liverpool.

Casting a wider net, using “sound alikes” such as Langdon and Longton, I found a large array of Walters arriving and leaving on ships at the port.

A Walter Longton appeared in the 1871 census for Liverpool. He was a student and the son of a farmer. He was born around 1860. I have no further info about him.

My “gut feeling” is that the Slaughter House’s Walter Langton may have been a transient.

(For more history like this – strictly for hardcore researchers – see my related article, Haunted History: The Slaughter House, Liverpool.)

Conclusion? Everything is a “maybe.”

Between the size of Liverpool, it’s history as a busy port, rumored names (and myriad spellings), it’s difficult to confirm – or deny – the many stories connected to the Slaughter House and its ghosts.

My sense is: It’s haunted. I’m just not sure about the ghosts – who and how many, and from what eras.

But maybe it isn’t, and spirits really do lurk there.

If you’re going to be in Liverpool anyway, I think the Slaughter House pub is worth a visit, and definitely a ghost vigil.

Let me know what you discover. Something about the Slaughter House pub has an odd energy to it, and I’d like to understand what that is. It’s just… odd. That’s the only word to describe it.

Here’s one YouTube video of an informal seance (glass on a table) at the Slaughter House: