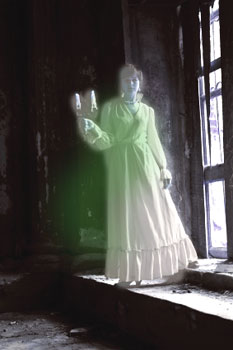 As I write this, it is December (2005), a time of year when many people start hearing “ghostly noises” in their homes.

In many cases, these will be ghosts.

However, there may be logical explanations, and those should be considered, first:

Temperature changes cause houses to moan, shift, and creak. Desert climates have the widest temperature swings between day and night, but even temperate climates have seasonal changes that can cause your house to shift slightly. And when a couple of floorboards rub against each other and echo in an attic, the noise can sound like someone in agony.

Not all ghostly noises are this easily explained. However, consider the logical answers first. Perhaps your noise is a ghost, but you won’t know unless you use your critical thinking skills to explore the alternatives.

And, just because the noise could be faked, or caused by something logical… well, that doesn’t mean that it is.

Webmaster’s note: When I was a kid, I used to hear noises in the attic overhead, many nights. My parents dismissed my insistence that it was a ghost. “Squirrels in the attic,” they replied, and nodded sagely.

Well, we did have a lot of very friendly squirrels in our neighborhood, and a nest in our backyard. I tried to accept my parents’ logical explanation of the noises.

However, when we were selling our house and had it inspected, I mentioned the squirrels in the attic.

“No evidence of that,” the house inspector replied. “I’ll check again.”

And so he did. And he found no place where a squirrel could get into the attic, and no evidence that animals of any kind had been up there.

So, even when the answer seems logical, it might still be ghosts. I may never know if our house’s nightly noises had been a ghost, or something else.