Many cities have a “power center,” where major buildings have always been built, and significant historical events took place.

In New Orleans, that place is Jackson Square. From the haunted Cathedral and Presbytere, to Pirates Alley and the ghost of Jean Lafitte, as well as the eerie spirits at Le Petit Theatre, this two-block area has over a dozen documented hauntings.

Jackson Square was the site of an early prison, in addition to several executions.

It was also home to an early New Orleans church, destroyed by a fire.

The park’s ghosts manifest as figures, floating lights, fragrances, and even the somber chanting of the “Kyrie” by the spirit of an 18th-century priest.

When I was in New Orleans in July 2005 (shortly before Hurricane Katrina), Jackson Square was a focal point of my ghost research, with very good results.

Below, you can see one of my best digital pictures; one copy is enhanced. 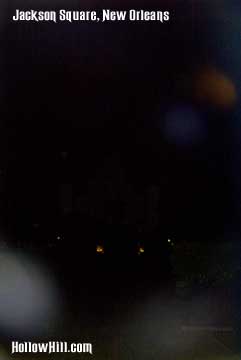 The copy on the left is exactly as I took it, looking through the Jackson Square gates at Decatur Street in New Orleans’ French Quarter.

On the right, I’ve adjusted the contrast to suggest (faintly) the statue in the center of Jackson Square, and the haunted cathedral behind it. (That’s the same cathedral as the one in the photo near the top of this article.)

There were no colored lights to cause the red and blue orbs on the right. Do those colored shapes represent the uniforms of the soldiers who were once stationed in buildings at this spot?

These vivid spheres of color appeared in several photos that we took over about ten minutes, along with the more classic “ectoplasm” shapes.

For those who insist those orbs are from high humidity: see my photo near the top of this page. That’s a flash photo taken nearby, with the same camera, in even more humid conditions. As you can see, that photo had no orbs.

I knew that I’d get some great evidence of hauntings at this park… just not this good.

In addition to Jackson Square’s many ghost stories, there is something especially odd about the gate where we took our photos.

Even with dozens of tourists passing, you’re likely to feel surrounded by an eerie silence at Jackson Square. For all its beauty and popularity, Jackson Square seems too quiet.

If you visit New Orleans’ famous French Quarter, I highly recommend an evening visit to the Decatur Street side of Jackson Square.

If your photos are like mine and others’, you’ll be very pleased with the results.