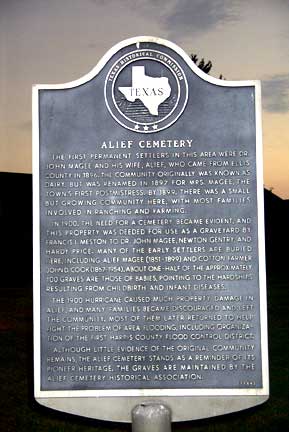 Alief Cemetery (pronounced “A-leef”), near Houston, Texas,  has a wide reputation for being haunted.

I haven’t had time to do much research, and I don’t intend to return for a formal investigation.

This pioneer cemetery was either unknown or ignored when an apartment complex was built on adjoining (and perhaps overlapping) property. As a result, the apartments are rumored to be haunted.

No one claims that the apartment buildings are actually on top of graves, but I’m not sure that anyone is certain, one way or the other.

During our visit at dusk, I caught several orbs, some dramatically large, with my camera. (See photos below.) Because of the fast-fading light, I did not check for EMF with a compass.  And frankly, the later it got, the more uneasy I was in that neighborhood.  I definitely stood out and caught looks of resentment from a few (not most) people.

I’m sympathetic. I believe that certain communities have the right to unspoken boundaries. They shouldn’t feel as their residential areas are being invaded, investigated, and treated like a sideshow by ghost hunters.

Had I realized the situation beforehand, I wouldn’t have explored the site at all.  I didn’t feel threatened, but definitely uneasy, especially as most of the young families seemed to go indoors as dusk fell.

Even in the daytime, I don’t recommend visiting this site alone. (Since posting this, several readers — one a former gang member — warned us that no one should go ghost hunting there at night, even in a group.)

Also, wear sturdy shoes or sneakers, even during daylight hours. The ground isn’t treacherous, but it is uneven in spots and difficult to see where the grass has not been trimmed.