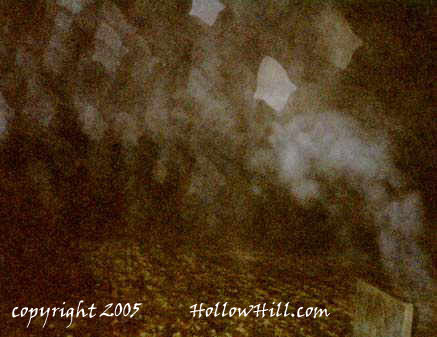 If you’re looking for a real, scary ghost photo, this may be it.

When you’re studying ghosts and hauntings, and have taken thousands of cemetery pictures, orbs become routine.

So, when I see something like the eerie mist in this photograph, I get very excited about it.

Forget about the bell-shaped orbs; they’re just the fog when I took this photo. (That’s one reason I like this Canon camera. Its internal lenses refract light bouncing off moist air in a bell-shape that can be used to distinguish “fake anomalies” from the real ones.)

However, the mist coming up from this grave fascinates me. It reminds me of vampire movies. (Later note: This article was written long before the Twilight series was even written.)

I like the contrast between the rising mist -whatever it is – and the larger water droplets in the air, which photographed as “bells.”

I’m not claiming that this mist is an anomaly. I don’t know what it is, but it’s definitely rising up from one of the haunted graves where we get our strangest “ghost photos.”

This was taken at Gilson Road Cemetery, Nashua, NH, on 26 Nov 1999, at about 6 p.m. The grave belongs to Rufus Lawrence.

When we charted the non-orb anomalies we’ve captured on film at this cemetery, his grave is Ground Zero for many of them. For example, the purple-streaked photo featured elsewhere at this site, was take just to the right of Mr. Lawrence’s headstone.

(Yes, this is a color photo, and no, I didn’t edit it with PhotoShop or any other program.)