My report from the French Quarter- January 2006

Ghosts have always been at home in New Orleans’ French Quarter. However, since Hurricane Katrina in mid-2005, hauntings have increased dramatically, though the French Quarter was barely touched by Katrina.

Despite the devastation in surrounding areas, the Quarter is an oasis. There weren’t as many tourists in January 2006 — largely because hotel rooms were being used by insurance adjustors, people associated with FEMA, and so on. However, the Quarter was just as welcoming as ever, and at least 80% of businesses reopened months ago. Day or night, it’s easy to forget that Katrina ever happened… except for the renewed paranormal energy in the French Quarter.

In the past, I thought it was difficult to distinguish real orbs from those caused by New Orleans’ naturally high humidity, especially in the summer. Generally, I attributed most orbs to NOLA’s climate.

As of early 2006, I’m not sure what to think about the hundreds of orbs in French Quarter photos. The weather doesn’t explain them, even to the most hardened skeptic.

Tip: It’s still vital to take two photos in a row, at each site. Try not to move at all, even to breathe. (If you’re using a traditional-style camera and it’s near your face, it’s especially important not to exhale. That releases humidity by the lens.)

Above, my photo of Pat O’Brien’s shows many orbs.

Before Katrina, we routinely saw two or three orbs in a “good” photo.

This is one of many haunted sites that is more wonderfully eerie now.

Before Hurricane Katrina, the French Quarter was generally, mildly haunted. There were a few locations — such as the Hotel Monteleone and Brennan’s famous restaurant — which were more reliable “haunts” than others.

However, since Katrina, the Quarter’s ghosts have much more energy, and it’s easier to identify truly haunted locations.

For example: like many professional ghost hunters, I was skeptical about the Lalaurie Mansion. Of course, its “ghost” folklore is part of New Orleans’ rich history.

Since Katrina, the Mansion seems more clearly not haunted now. that’s especially true if you compare it with very evident ghosts at the nearby Ursulines convent, the Beauregard-Keyes House, and so on. 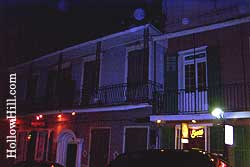 During our January visit, we enjoyed Haunted History’s evening ghost tour. This is one tour that is so well-respected and popular, it has remained in business while many other tours folded.

The photo (above, right) is one of over a hundred orb photos that I took during one of their January 2006 ghost tours.

A MUST-VISIT FOR GHOST HUNTERS

In general, the French Quarter is more vividly haunted than I’ve ever seen it in the past. And, with fewer tourists right now, there’s less psychic “noise” to camouflage the energy from both active and residual energy hauntings.

I don’t know how long these ideal conditions will continue. If you’re a ghost hunter, I recommend visiting the French Quarter as soon as possible. It’s a remarkable opportunity to witness rich, genuine hauntings in America’s most haunted city.