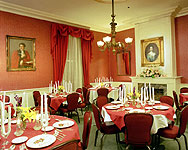 Brennan’s Restaurant on Royal Street in New Orleans’ French Quarter is well respected as a world-class restaurant. “Breakfast at Brennan’s” has become a Louisiana tradition for visitors as well as locals who enjoy fabulous food in a relaxed but elegant setting.

Upstairs at Brennan’s, the Red Room is famous for its ghosts.

According to a legend dating to the 18th century, Monsieur Lefleur calmly went out one morning and arranged for three funerals. Upon returning home, he killed his wife and his son before hanging himself from the sturdy chandelier in the center of the Red Room.

Portraits of the three decorate the walls of that room.

It’s unclear if M. Lefleur’s ghost is among the spirits at Brennan’s charming restaurant, or if the Red Room is haunted by the ghosts of the murder victims, Mme Lefleur and her son.

Day or night, you can feel a “cold spot” over the lovely fireplace in the Red Room, using just your hands. (Before you decide you’ve felt a “cold spot,” make sure it’s not a downdraft from the chimney. If it’s a chilly day or evening, ask if the flue is open.)

In addition to the cold spot, the portrait of M. Lefleur seems to change expression every time you glance at it. I took several photos of the portrait, but as M. Lefleur’s smile changed to a sinister grimace, my camera had problems and the pictures turned murky.

Below, you can see a series of my photos taken one evening in July 2005. I had to increase the contrast on the right two so that the face could be seen online. Other than that, I did not alter them at all. They are all the same portrait.

Yes, this is one of those “either you see it or you don’t” set of images. Not everyone will see the changes between the pictures. Some will blame it on the lighting. (It also helps if you’ve seen the portrait in real life, so you know have a frame of reference for these photos… no pun intended.)

As I watched, Monsieur Lefleur’s face seemed to change from posed to vulnerable (or perhaps younger), and then a troubled grimace tightened his lips. It turned slightly sneering, and slightly distasteful. Finally, he looked anguished or perhaps angry… even sinister.

If you dine at Brennan’s — which I highly recommend — and have an opportunity to visit the Red Room, keep checking the portrait of M. Lefleur and see if his expression changes.

The painting’s transformation isn’t as dramatic as the special effects at Disney’s “Haunted Mansion” attraction, but I wonder if Brennan’s painting inspired Disney’s imagineers.

(If the Red Room isn’t in use, Brennan’s staff may allow visitors upstairs to see if the Red Room is active with ghosts.  The room is usually haunted, but even ghosts take a break now & then.)

Brennan’s is among New Orleans’ most haunted sites, and M. Lefleur isn’t its only spirit. The restaurant is haunted by a dedicated former chef, as well as an old woman who paces the corridor outside the Red Room.

Brennan’s serves some of the best food in the world. If you want to splurge on one elegant meal while you’re in New Orleans, Brennan’s is the place to go.

(When you’re there, you may see movie stars a adjoining tables. Be discreet. Don’t stare or ask for autographs. Just enjoy your meal… and the restaurant’s ghosts.)

Brennan’s Red Room and exterior photos are courtesy of Brennan’s Restaurant (c)2005. The three photos of the Lefleur portrait are (c)2005 Fiona Broome.