Gallows Hill is among Salem’s most famous site related to the witch trials of 1692. However, no one is certain of its historic location. 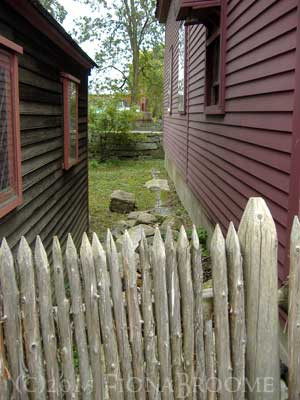 But, is it that the hill where “witches” were actually hung? Evidence is scant and unreliable.

Most researchers use Sydney Perley’s 1933 map of Salem, showing Gallows Hill near Pope and Proctor Streets, near an inlet from North River.

We can learn a lot from the land formations of 1692, and compare them with areas that have — and haven’t — been filled since then.

In addition, Welsh researcher Gavin Cromwell* and I conducted paranormal research at Halloween 2008. Our discoveries suggest at least one additional spiritually-charged location near the current Gallows Hill site.

The land beneath the hill seemed generally normal. Perhaps the regular Witch gatherings — especially the huge one at Samhain (Halloween) — have cleared the negative energy.

However, I’ve sensed something troubling in the shrubs and wooded areas between the hilltop and the land below. That may be from more recent incidents. 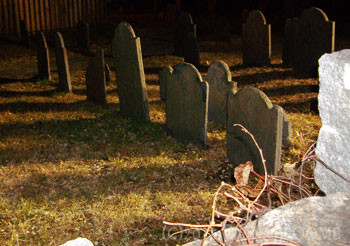 Researchers may never document the exact location of the hangings, or where most of the so-called witches’ bodies were buried. That includes the body of Giles Corey,** remembered for one of the Salem curses.

However, additional research may reveal locations where unmarked graves and landmarks connect us with Salem in 1692.

Since my own ancestors were in Salem during the Witch Trials, I’m especially interested in finding more about that era and the spirits that linger.

*I’m confident that our experiences at Gallows Hill were genuine.

**Giles Corey’s first wife, Mary (1621 – 1684), is buried beneath a small stone at the Burying Point Cemetery, near the Witch Memorial. Her name appears as “Mary Corry” with a note that she was the wife of “Giles Corry.”

(Remember, spellings weren’t standardized until the 19th century. Many family names appear with various spellings on historic records and monuments.)