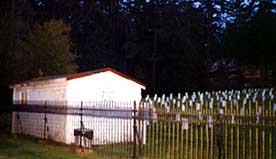 There are a few ghost stories associated with Fort Worden’s cemetery. I arrived for this investigation hopeful, but the reality was disappointing. I saw rows of tidy white markers, each of them identical in size, but the cemetery didn’t feel particularly haunted. My photos and EMF readings showed nothing unusual. 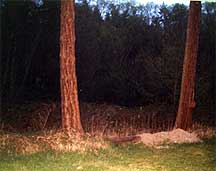 Woods next to Fort Worden Cemetery

The wooded area next to the cemetery felt odd. But, nothing unusual appeared in those photos either. Next time I’m at Fort Worden, I will spend more time there. I’d be willing to bet that those woods witnessed something unfortunate, and–perhaps on the anniversary of it–those woods may be the most haunted spot at Fort Worden. My “gut feeling” is usually right, and I feel that there is some connection between those woods and the haunting at the Guard House.

My next stop was the Guard House. According to legend, when Fort Worden was active, a soldier accidentally shot & killed himself in the Guard House, and he has haunted the building ever since. It’s a great story, but a little too quirky.

I did not expect the Guard House to be haunted. However, I tried a few photos with my now-famous “sparkles” camera.

I have never seen such bright and colorful sparkles. They were vivid, crayon box colors. They were large; the smallest was the size of a baseball, and many others were as large as beachballs. Most people would probably describe them as orbs.

Generally when I go ghost hunting, these lights and orbs are at least 20 feet away. At Fort Worden, they were next to me. Some were probably close enough to touch, but I was taking photos too quickly to pause and investigate.

(These “sparkles” never show up in the photos. They are simply an indication of when we are likely to get anomalies on film, as well.)

Most of the Guard House photos looked perfectly normal, with nothing of note in them. We discount faint orbs because of reflective glass windows, etc. At least 80% of my photos looked like the lower of these two: 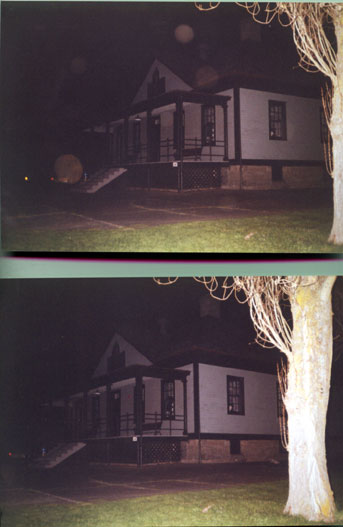 Top photo: Some orbs in photos at Fort Worden’s Guard House
A few photos had dim orbs in them. These were not bits of dust; the evening was too humid for dust. And, the wind was fierce, so any bugs, pollen, droplets or particles would have appeared as streaks, not orbs.

Analyzing these photos, we’d ordinarily discount any orbs due to some car lights in the nearby parking lot. However, this is the advantage of having many photos to work with: If the lights had caused orbs, we’d have orbs in most of the photos. We don’t.

On the next page, The Man in Blue, see more dramatic orbs and one of our most startling photos, ever: A ghostly blue figure standing just outside the Guard House.