Charles Dickens’ story, A Christmas Carol, is a favorite among many people. But how realistic are the ghosts in the story?

Marley’s ghost rattled his chains as he appeared to Scrooge.

Today, we rarely hear of a ghost rattling chains. In fact, apparitions are very rare, and most of them are silent. More often, invisible ghosts are the ones that knock, rattle objects (including chains), and whisper or shout.

However, there are exceptions. In the first century CE, Pliny the Younger documented a ghost who was seen and heard by Athenodorus, at a villa in Athens. The ghost wore chains, and pointed to a spot in the garden before vanishing. The next day, Athenodorus had that spot in the garden dug up, and a skeleton in chains was found buried. They re-buried him in a proper cemetery, and the ghost never appeared again. But ghosts in chains are not entirely in the past. Even today, a tall, evil-looking man appears on back roads and highways in Yorkshire, England, and jumps out to frighten late-night travelers. He’s known as “Jack in Irons.” Most people who’ve seen him comment that the ghost appears wrapped in chains.

Of course, Marley is not the only ghost in Dickens’ famous tale. There are the ghosts of Christmas Past, Present, and Future. 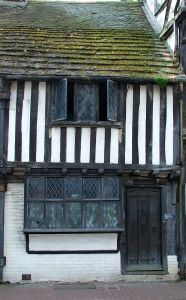 As Scrooge is led through scenes of his past, his ghostly companion informs him, “These are but shadows of the things that have been…They have no consciousness of us.”

These hauntings are like a hologram or video, played on a continuous loop.

Events from the past appear to be played like a movie, over and over again. Most are probably mere images of people who took part in the events, many years ago.

One of the best examples of residual energy hauntings is the visions of war seen in the United States, at Civil War battlegrounds.

Another might be the ghost of Anne Boleyn and companions, in the Chapel Royal at London’s Tower. Some suggest that her spectre that roams the Tower is residual energy, but when she leads a procession up the center aisle of the chapel, she’s a sentient ghost.

At Christmas, she appears at Hever Castle and – according to first-person descriptions – she appears to be alive and well and very real.

But, the clarity of the images in Dickens’ story – as well as reports of Anne Boleyn’s raise an interesting question: Are these really hauntings, or perhaps time slips… and is there a difference? Regardless of what causes them, residual energy hauntings are a ghost hunter’s best opportunity to see a “ghost” that appears in human-like form.

Keep in mind, you’re only likely to see them. Some also report sounds with the imagery, but many don’t.

However, these forms rarely react to or interact with people viewing them. In fact, most ghost hunters believe that these hauntings are just energy imprints on the environment, replaying the events on a repeating and regular schedule.

That fits Dickens’ story, because – though Scrooge feels like he’s in the scene – he’s not able to interact with the people in them.

However, A Christmas Carol, is fiction, even if it matches many genuine ghost encounters.

The question this raises is: Did Dickens make up the story from whole cloth, or had he experienced something similar, himself?

Recent research suggests Dickens was intrigued by ghosts, and perhaps fearful of them. As a member of the Ghost Club, he seemed obsessed with debunking every ghost story and seance he could. That level of preoccupation suggests a greater fear: that ghosts are real, after all.

Exhibition tells how Charles Dickens was spooked by ghost tale doppelganger, from The Guardian

Charles Dickens Was A Real Life Ghost Buster, by Bustle

The Ghost of Anne Boleyn, from On the Tudor Trail

Athens and Ghosts, in Strange History

One thought on “Could the Ghosts in Dickens’ Christmas Carol Be Real?”