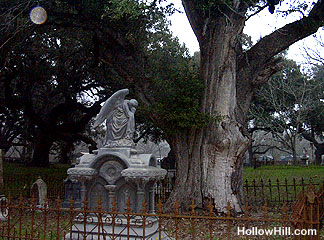 Columbus City Cemetery, in Columbus, Texas, is one of the most photogenic cemeteries in southeast Texas, and it may be one of its most delightfully haunted.

In the daytime photo above, an orb appears near the angel monument. The skies were heavily overcast, so this wasn’t a lens flare; the sun wasn’t visible, and no flash was used.

During three separate visits to the cemetery, nearly every photo of this angel shows at least one orb, and sometimes two or three.

The eerie mists in the photo, Columbus, Texas – Ectoplasm are just to the left of the angel.

These graves are almost in the center of a very large field that’s been set aside as the Columbus City Cemetery at 1300 Walnut Street in Columbus, Texas. Only a small percentage of the graves have headstones, but those that do are often extraordinarily beautiful… and haunted.

This cemetery is described in more detail in my book, The Ghosts of Austin, Texas. That book contains a full chapter about haunted sites in nearby Columbus.