Season 10 of American Idol was hosted in a house that some contestants felt was haunted.

They complained of the following phenomena:

There was only one event that sounds like something potentially paranormal. According to a report in OK! magazine (USA), some of the American Idol contestants were watching a horror movie. Contestant James Durbin decided to follow-up with a prank.

According to his report, “”I opened the door to the garage – I was trying to freak out Pia [Toscano] – and it freaked me out because something white that looked like an arm that kind of came down.”

Later, another contestant described it as a hand that fell from the ceiling.

That could be something normal, but it’s far more consistent with paranormal activity than anything else mentioned.

Supposedly, the contestants immediately moved out of the house and were given alternate housing.

Since only one incident sounded even remotely paranormal, I’m not sure why this was news. Personally, I wouldn’t investigate a house just because someone thought they saw an arm or a hand appear when a garage door was open.

It seems like at least some of the cast quickly came to their senses, too.

Zak Bagans of Ghost Adventures suggested a crossover show, where his team would investigate the house and use the American Idol finalists as triggers for activity. He was turned down.

Since that could have been a ratings bonanza for Ghost Adventures while attracting more attention to American Idol, being turned down increases the likelihood that the whole thing was a prank.

Floating sheets, spiders, and flickering lights sound like something out of a very bad “scare” show on MTV. 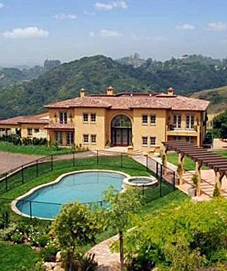 The real test will be whether the house’s new owner, Munchkin, Inc. millionaire Steven B. Dunn, encounters anything odd in the house.

Personally, I don’t think he has anything to worry about. He’s a clever entrepreneur with an MBA from Harvard and a noted art collection, so I expect the spectacular views (seen at right) were more important to Dunn that the American Idol connection or the house’s possible ghosts.

The selling price of the house also suggests that it’s not haunted. According to reports, Dunn paid over $11 million for the American Idol house.

For a 15k square foot house on two acres in Bel Air, where houses sell for about $480/square foot, $11 million is a good price in today’s market.

So, I’m not seeing any of the usual indications of a distressed, haunted property.

I’m not sure if the floating sheets and flickering lights (etc.) were a very amateurish effort at faking a haunted house. Surely, the producers could have found some bargain-basement SFX guys from actual ghost “reality” shows…?

If someone is looking for a spectacular haunted house in or near Hollywood, these are better choices:

For more Hollywood haunts like these, you’ll find plenty of lists online. One of the most complete is at Haunted-Places.com, but since they have the wrong Houdini address, it’s smart to fact-check any address (and story) on their long, detailed list.

I don’t think we’ll hear anything more about ghosts at that American Idol house. Except for Durbin’s report – the only one with credibility – I don’t see any reason to suspect paranormal energy at the Season 10 house.

However, the ghost reports at the Season 8 house could be more serious. Apparitions and unexplained growls are far more credible, at least among “reality” shows like this.