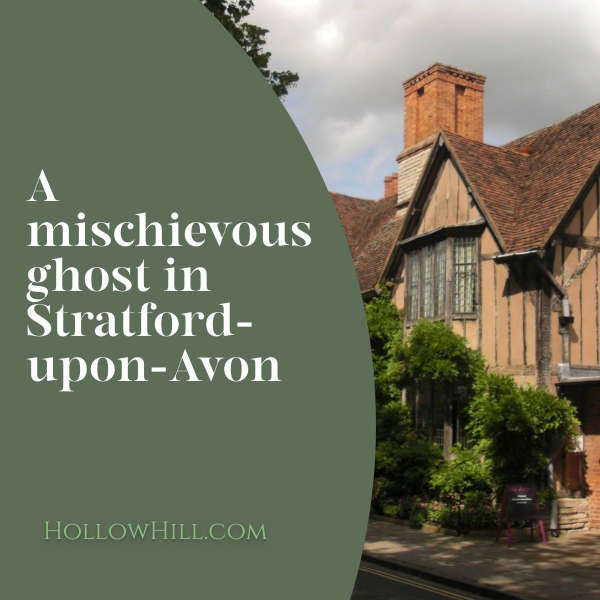 The Falcon Hotel (Stratford-upon-Avon) – now the Hotel Indigo – was haunted when friends and I stayed there in 2007. It’s one of Warwickshire’s most charming hotels, with 20 rooms in its haunted 16th-century wing, and 64 rooms in the more modern wing.

In June 2007, several Hollow Hill investigators spent the night in the haunted wing of the Falcon. It was comfortable and quiet, even though our rooms overlooked the street.

Though we had a good night’s sleep, we encountered a variety of low-level paranormal phenomena. Odd noises, unexplained chills, creaking floorboards with no one there… it was routine for a cozy, haunted hotel. And, it was fun!

However, we’d heard that one room at the hotel is especially haunted. It’s a corner room in the 16th century wing.

It was one of the silliest hauntings I’ve seen in awhile… but, the UK is like that. It has the widest possible range of ghostly phenomena. (I absolutely love investigating in the UK, and especially in England.)

We were lucky to have brief access to the hotel’s most haunted room.

The room with the “broken air conditioning”… that wasn’t

Our adventure began when I was in the lobby and overheard a guest talking about how chilly his room had been.

He complained that he couldn’t find the air conditioning controls.

The hotel moved him to another room, and his previous (chilly) room had been prepared for new guests.

One of the hotel clerks quietly explained to us why the guest couldn’t find the a/c controls: There was no air conditioning in that room.

We rushed to see if the door to that room was still vacant, and if the door had been left open.

Our team had just a few minutes to explore the room. It seemed elegant and very comfortable. 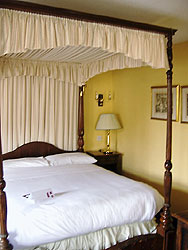 Our EMF readings and pendulum work – as well as our ‘gut feelings’ – indicated that the bed was the focal point of the hauntings.

The bed seemed to have a ‘hot spot’ over the center of it.

It’s unlikely that the bed itself is haunted. But, if that’s an antique bed frame, the bed (not the mattress) might have its own ghost.

(If anything tragic happens in a bed, such as a death, hotels generally replace the bed immediately. Some even close the room for a week or so, as a precaution. The Driskill Hotel in Austin, Texas went to extremes with one room they sealed up for years.)

Also, in Stratford-upon-Avon’s Falcon Hotel, an earlier bed in the room might be where something – or several events over the past 400+ years – left an imprint.

Just as ghosts don’t always realize that time has passed, they may not realize that the current bed is different from the one that they slept in, centuries ago.

And so we took photos

We each took photos of the bed. I took several with my film camera and at least a dozen with my digital camera.

That’s when this story turned silly.

Only one of my digital photos of the bed shows the bed. That’s it, above.

All the rest show random corners of the room… the kinds of photos I take, but not in the volume that showed up when I had time to go through my camera’s files.

(I routinely take “extra” photos, in case an orb is hovering in a corner. But, in a case like this, every moment was important. I wasn’t going to waste time. Almost all of my attention was on the object most likely to be haunted… and that was the bed.)

The following represent nearly every digital photo from that room.  (The film photos were dark or weird, and pretty much useless to me.)

I know took five or six photos of a team member using a pendulum. At the time, I was sure I was being annoying, insisting, “Wait… wait… just one more picture…”

Also, in at least one photo, I focused on my own hand (holding an EMF meter). In that one, I’d made sure both the meter and the bed were in the frame.

But… my pictures showed almost everything but the bed.

It’s not a dangerous haunting.

It’s not a malicious haunting. What happened – the camera anomalies – are typical of a prankster ghost, possibly a child.

It was certainly an unusual experience. Annoying at the time, because – when I had a few minutes to review the photos and saw what had happened – we couldn’t return to the room. The housekeepers had locked it as we left.

I wouldn’t hesitate to spend the night in that room, and I’m fairly sure that I’d get a good night’s sleep.

However, I’d be sure to have enough blankets on the bed, in case the room seemed as chilly as described by the previous guest.

That guest’s innocent comments about the air conditioning convinced me that the room is haunted.

In fact, in early June 2007, the Falcon Hotel didn’t have air conditioning. The guest was describing a large ‘cold spot’ around the bed.

(Of course, if it’s a sultry night, that’s probably the room you’ll want to be in.  So, ask the concierge for information about the hotel’s most haunted room.)

This is a good example of how ghost hunters sometimes find haunted locations: We listen (overhear) others’ conversations about odd and unusual things. If it’s something that could be ghostly – like a “cold spot” – we follow-up, if we can.

Next time I’m in Stratford-upon-Avon, I’ll be sure to follow-up and – I  hope – spend at least one night in that same room.