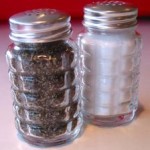 In the past, I’ve talked about the power of salt to repel or block angry and malicious spirits.

I’ve only used salt a couple of times. I think it’s an extreme remedy.  However, I know people who rely on it regularly.

You’ve probably heard the saying, “sow the ground with salt.”

The origins of that phrase seem mixed.  In the past — according to Wikipedia, anyway –  salt was supposed to curse the location.

When I was growing up, I heard that salt was used to bless the ground.

So, those are opposite views of salt. According to folklore from my childhood — explained by people I trusted — evil spirits can’t cross a line of salt.

When psychics and paranormal researchers use salt, that’s usually the intent: To create draw a line – a physical barrier – between the entity and the people it’s affecting.

(I don’t think salt is strong enough to block something at the demon level, or I’m sure more exorcists would use it.)

In addition, I’ve recommended placing a bowl of salt near a bed where ghosts have been troublesome.

According to feedback from my readers over the past 15+ years, that’s been 100% successful.

In my research, I see many salt references in the Bible.

And he went forth unto the spring of the waters, and cast the salt in there, and said, Thus saith the Lord, I have healed these waters; there shall not be from thence any more death or barren land.

That’s clearly a healing reference, not a curse.  Similarly, the Bible describes a covenant of salt in 2 Chron 13:5 (KJV).

I’ve read other, very spiritual connections between salt and blessings:

There are frequent allusions to this practice (Jer 34:18). Such alliances were called “covenants of salt” (Num 18:19; 2Ch 13:5), salt being the symbol of perpetuity.—Easton’s Illustrated Dictionary

Salt was used when a baby was born, as well:

As soon as a child was born it was washed, and rubbed with salt (Ezek 16:4) —Easton’s Illustrated Dictionary

In other words, the connections between salt and spirituality are ancient, and most of them seem to indicate a blessed use for salt.  However, older records may emerge and shed a different light on this topic.

Which salt to use?

According to tradition, sea salt will work better than plain table salt.  Don’t feel as if you have to run out and buy sea salt.

In fact, from readers’ reports, table salt can be good enough for use in a haunted bedroom.

I’ve never compared the effectiveness of different salts.  Generally, I prefer to carry sea salt. It’s what I use in cooking, so it’s convenient.

For extreme cases, blessed salt is supposed to be more powerful than salt that’s simply bought at the store and used immediately.

However, if I needed salt in a hurry during an investigation, I’d use any salt that I could get my hands on, quickly.  Later, I might go back with blessed salt.

Salt can be blessed in different ways, depending on your spirituality.

Start with salt you’ve bought at the grocery store.

If you’re working with a Christian context, you can bless the salt yourself.  Most people seem to gesture in the sign of the cross and use words that announce that they’re blessing the salt in the name of Deity. (Using holy water during the blessing is optional. )

You could also have the salt blessed by a priest or minister.  This usually takes about 30 seconds. A token donation for the blessing is nice but rarely required.  I usually donate between $5 and $15.

Not Christian? I’d still ask a priest or minister to bless the salt.

Are you working with an earth-based spiritual context?  Place a bowl of salt in the window so the light of the full moon shines on it for three consecutive nights.

If your beliefs are related to Voodoo, Vodun, or Yoruba-based spirituality, you may also add a small amount of black salt.

However, only do this if you are completely aware of what black salt does. (That’s imperative.)

If you’re not sure, leave black salt out of the mix.  (Frankly, if that’s your spiritual foundation, several floor washes may provide better protection than the salt, anyway.)

Remember, most of these beliefs about salt are based in folklore and in spiritual traditions.  I can’t promise that salt will work.

I keep salt in my investigation kit but rarely use it.

Even if all it does is act as a placebo — making me feel a little safer around something that troubles me — it’s worth having on hand.