Spiritual protection for ghost hunters is an important topic. Several people have written useful books about it.

Remember, we usually don’t know how dangerous a site is until we investigate it.

It’s smart to arrive prepared, even if you think it will be a “lite” investigation.

Consider three main issues when choosing protection. Each can be important.

Here are some of the most popular items ghost hunters use for protection.

Fresh garlic cloves are available at most grocery stores.  Garlic not only repels werewolves and vampires, at least according to folklore, it’s also supposed to keep demons at a distance.

You can carry it in a pocket or your backpack.  Some people have a clove in a pendant and wear it as a necklace.

If you tuck a garlic clove in your shoe and it’s against your skin, expect “garlic breath” within a few hours.  It will penetrate the skin, enter your blood stream, and carry the odor throughout your body.  That’s actually a way some people use garlic as a health treatment.

I use white salt, but it’s one of two kinds of salt for protection. (The other is black salt.)

People believe that salt repels ghosts and evil spirits.  In fact, an old remedy from folklore is to lay down a line of salt… evil entities cannot cross it.

I’m not sure if that’s true, but it seemed to work the one time I tried it.

Black salt can be one of two kinds of salt. One is edible and the other isn’t.

One is a dark, pinkish, sulphur-y tasting salt mined in India. It’s usually sold in upscale grocery stores, among the exotic and colored table salts. It’s also stocked by some ethnic grocers.  Vegans and vegetarians use it to make tofu taste like egg salad.

The other kind of black salt is made by mixing table salt with something to turn it black, like ash or powdered charcoal, cast iron scrapings, or really black pepper. People buy it ready-made, usually at a shop related to witchcraft or a botanica.

In Voodoo and related traditions, black salt may lift curses and repel evil and malicious spirits.

Never eat black salt.  Do not give it to anyone to consume. Don’t leave it around where children might decide to taste it. Depending on what the black salt is made from, it could make them ill or even kill them.

Some people use Holy Water to bless houses that have very light (but annoying) paranormal activity. 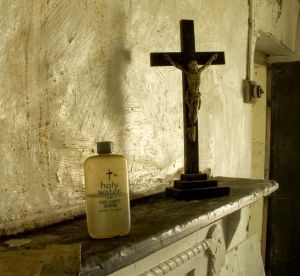 From what I’ve learned about demonic activity, I would use Holy Water only in situations where there is absolutely, positively no likelihood of malicious and demonic energy.

One thing I learned from the late Father Andrew Calder is:  If you’re dealing with something dark and demonic, Holy Water can make things far worse… quickly.

Andy had more experience with demonology and exorcisms than most people, and I trust his advice.   I wish I’d learned more from him while he was here, but his warning has stayed with me.

I used to routinely carry Holy Water with me. Also, at sites such as Traditional Catholic Priest, you can learn to make Holy Water at home, or even on-the-spot at a clients’ home.  (The Holy Water you’ll decant at almost any Catholic church is a little different, and — in my opinion — more powerful.)

Since talking with Father Calder, I don’t use it at all.  In my opinion, most ghost hunters don’t grasp the dangers of Holy Water — and other Christian symbols — if the problem is demonic.

I know that I didn’t.

First-person stories from John Zaffis and other demonologists made that very clear.

If the situation indicates the need for a house blessing, I tell the client to contact their preferred professional spiritual counsellor.

Most priests and ministers will expect a small donation to help offset their travel expenses, but it’s always worthwhile when a blessing is needed. And, to be blunt, it’s the safest approach.

Weirdly, that’s true, even when the person using them doesn’t believe in the associated spiritual tradition.  I have no idea why.

It’s possible that the object symbolizes a religion that the ghost believed in, or still believes in.

These include holy medals (St. Michael medals are especially popular), pendants representing a lucky horseshoe, iron nails (may repel faeries more than ghosts), or a lucky rabbit’s foot (not widely used during ghost hunts, due to their association with animal cruelty and death).

Some ghost hunters wear “lucky socks” or a similar item of clothing. They firmly believe those items provide protection from evil… or at least bad luck.

Others wear a garment or piece of jewelry that was left outside on the night of February first or second. According to folklore, Brigid (or St. Bridget) blesses these items, making them especially lucky, healing, or protective during the coming year.

In some folklore and spiritual traditions, pouring liquor on the ground as a gift is helpful if you’re requesting assistance or protection from the good spirits at the site.

On the other hand, offering liquor to some spirits in Vodun, Voodoo, and related traditions… that can bring out the mischief makers.

My ancestry and traditions are mostly Irish.  When I really need help with something, I visit the grave of one particular ancestor, pour good Irish whiskey on the ground, and then have a one-sided chat with her, telling her what I need.  It seems to work. 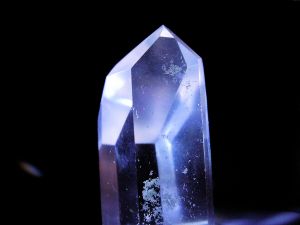 Here’s what I carry:  I have a couple of crystals in my wallet.  One is a Herkimer diamond – the same kind used by “Ghost Busters” Dan Akroyd and his dad, to purify their Crystal Head Vodka.

(I carry a second crystal, but I’ve forgotten what it is.  It’s for physical healing, especially stress and headaches.  It’s clear, colored with shades of purple and green.  It’s probably fluorite.  All I know is: When I bought it, a miserable headache vanished as soon as I picked up the stone. I’ve never had another severe headache like that, as long as I’ve carried the fluorite with me… and that’s over 10 years, now.)

Sometimes, I carry or wear hematite.  Usually, I wear it as a pendant.  (Mine is on a simple cord.)  In folklore, it’s a general purifier.

In my wallet, I have a St. Michael the Archangel medal, blessed by the late demonologist, Father Andrew Calder.

It’s been one of my most valued forms of protection since Andy was called home in September 2012.  (Any priest can bless any medal you have.  The combination of the St. Michael imagery plus the metal plus the blessing… that can be powerful in some contexts.)

In my car, I usually have blessed salt as well as religious scriptures.  I use those only in extreme cases… and that’s very rare. I am very mindful that any case I consider “extreme” could be antagonized – and made worse – by any Christian symbols or scriptures.  So, if the situation is that dire, I usually have the client contact a demonologist, or at least a local priest or minister.

Every community, ethnic group and spiritual tradition recommends different kinds of spiritual protection.  Whether those methods actually work or it’s “placebo effect” doesn’t matter to me, as long as people who are nervous feel they are out of danger or less affected by it.

If you don’t believe in a particular religion but you’ve always wondered if one of their tokens or symbols might be helpful… well, it might be worth a try.  That small “maybe” window might be enough to help you when you need it, in a stressful and frightening situation.

Spiritual protection can be important for some ghost hunters.

That can be a simple prayer or circle before entering the haunted site, or something else.

It doesn’t have to be an object (after all, what you’re dealing with probably has no physical form in our world), but these are things to think about before your investigation… not something to regret leaving out, once things get strange at a haunted site.