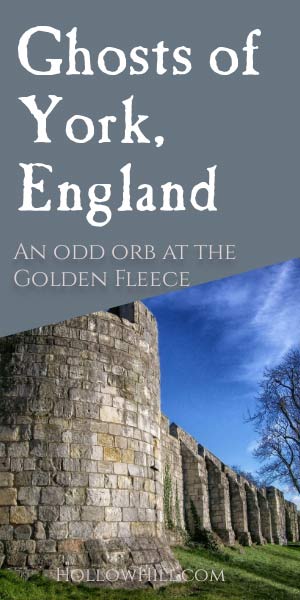 They appear to be floating or gliding energy forms, so they can be anywhere at all.

I’ve heard reports from people who successfully asked orbs to move to certain locations for photos.  For example, they told the ghost to move the orb over a particular doorway or gravestone… and it did.

(Generally, I only ask ghosts to manifest however they can, if they’d like to appear in a photo. I’m uncomfortable with the idea of ordering them around.)

During many years of studying ‘ghost photos’, I’ve noticed an odd pattern among many orbs. They appear in consistent places. The trend is so predictable, we believe it’s beyond coincidence.

In an unusual number of photos, I’ve seen orbs directly over people’s heads. In most cases, the photos were taken at a significant event (such as a wedding or prom) or a family gathering.

Other orbs appear – in surprising numbers – over chairs, as if the ghost is sitting there.

For example, the photo on the right shows an orb ‘seated’ at the haunted Golden Fleece pub in York, England. (A group of us investigated at “York’s most haunted pub” in June 2007.)

Because that restaurant has many shiny surfaces, I discounted most orbs from that casual investigation. Nevertheless, the placement of this one caught my attention.

Is it a credible photo? I’m not so sure.  I’d like to return there for more research. I believe the Golden Fleece is one of York’s most intriguing haunted locations.

Also, I think we need to consider orb photos in a broader context. For example, if other odd things were going on, exactly when the photos were taken. Or, if someone – without knowing where an orb was hovering, in a photo or video – directly indicated something “ghostly” at the exact same place and time.

In other words, orbs may be one of those “you had to be there” phenomena. Out of context, taking orbs seriously can raise eyebrows.

I understand that, and it’s frustrating. Personal evidence can be the most personally convincing… and have the least credibility among fellow researchers, much less skeptics.

Here’s a quirky (and slightly silly) four-minute video about haunted York, including the Golden Fleece.

To be honest, I don’t know what orbs are.

Many investigators call them ‘ghost orbs’ when we can’t explain them, after considering humidity, dust, reflected light, and so on.

In 2013, after several years of intense study, I concluded that humidity, dust, reflected light, and other apparently reasonable explanations rarely cause convincing orbs in photos.

(I stress “convincing” because – to an experienced investigator – it’s fairly easy to spot an orb caused by dust, pollen, and so on.)

So, I’m having to retract over 10 years’ advice that most orbs are the result of natural, reflective objects – large and small – at sites where the photos were taken.

They’re not. (Yes, that’s an embarrassing admission. I wouldn’t admit to it, except my tests have shown, conclusively, that convincing orbs really are anomalous.)

Ghost hunters have ample proof that unexplained orbs appear in haunted places in dramatically higher numbers. Orbs seem to appear in areas where EMF levels spike. We’re not sure if orbs contain higher levels of energy, but some researchers believe that they do.

ORBS IN PHOTOS v. ORBS YOU CAN SEE

A small – perhaps gifted – minority of researchers are able to see orbs in real life. However, the orbs that they see don’t usually appear in photos taken at the same time.

In most cases, researchers don’t see anything before, during and after taking photos that – when viewed on the monitor or printed – reveal orbs.

After over a dozen years of professional research, I’m still astonished when investigator see vivid orbs in photos, though we saw nothing unusual when the photos were taken.

Years ago, I was the first ghost hunters to use the term ‘sparkles’ to describe an odd visual effect that occurs with some cameras.

I’ve learned that, when people see sparkles, there’s a good chance we’ll find orbs or other photographic anomalies in our pictures.

Ghost hunters aren’t sure if orbs are related to spirits that are aware of us and can respond to the people around them.

However, we’ve seen enough ‘ghost photos’ to know that orbs often appear in similar locations, as if they’re comfortable among us.

Whether they’re posing for group photos or sitting comfortably in a favorite chair, the placement often seems deliberate.