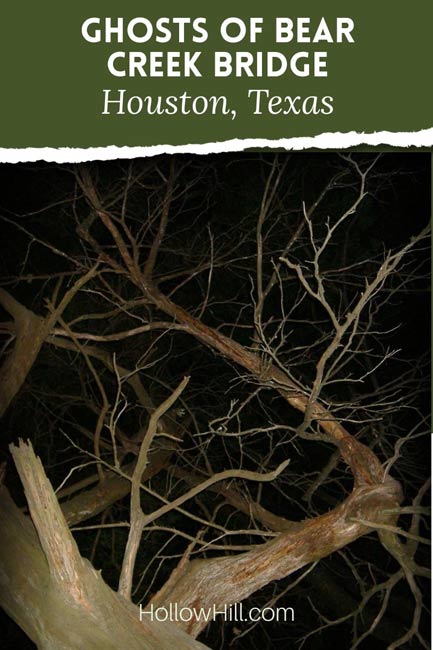 It follows the route used by Civil War soldiers. The battle took place in the southeastern quadrant of Bear Creek Park.

According to folklore, those soldiers’ ghosts still march along Patterson Road at night.

If you stop on the road, they’ll tap on your car.

Of course, YOU SHOULD NOT DO THAT.

This area was once a farming community of German immigrants and their descendants.

Today, it is part of Addicks Reservoir and Bear Creek Pioneers Park, in Harris County, Houston.

There are two bridges on Patterson Road by Bear Creek Park.

One is Langham Creek Bridge, near Eldridge Road.

The other is Bear Creek Bridge, closer to Highway 6.

Are the legends true?

In daylight, Bear Creek Bridge feels far more eerie than the other bridge on Patterson Road.

In May 2005, using the “sparkles” camera, two of us – during an informal evening of ghost hunting –  saw visible anomalies at the Bear Creek bridge.

We saw none at Langham Creek on that same evening, though we did capture some strange mists in our photos.

This orb is probably an insect.

I took this photo at Bear Creek bridge. As you can tell from the grain in the photo, it was a very dark evening. To see anything in the picture, I lightened it considerably in Photoshop.

I’ve included the image – and some trees around it – in case anyone else captures a clear anomaly in a ghost photo at that same location. 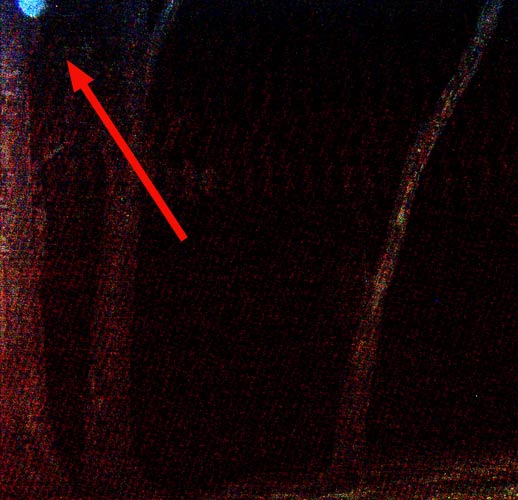 After, we paused on that bridge, testing the “tapping Civil War soldiers” legend.

This is important: We only paused.

You should not stop there. You probably shouldn’t even pause on that bridge.

Definitely do NOT turn off your engine or your car’s headlights.

Tapping on my car

With my car windows open, I heard three rapid, distinct and clear taps on the car, immediately below my outside mirror.

The tapping sounds was like metal on metal, similar to my car antenna tapping my car roof when I’m driving on a very bumpy road.

I have no explanation for the tapping, since the car window was fully open and I could see the side of the car easily.

In fact, I looked out of the car right away, to see what caused the noise. I saw nothing unusual at all: No insects, no animals, and nothing brushing against the car.

It was too loud to be the car or the bridge settling.

I was in the driver’s seat, so my door was towards the center of the bridge.

There was no likelihood of shrubbery, vines, or branches hitting the car.

I had no explanation.

In my experience, most paranormal encounters are very different from anything “normal.”

That’s why it took me awhile to accept that something so loud (and apparently mundane) could have been ghostly.

The taps sounded entirely real, normal, and I wanted to know who’d tapped on my car with something like a metal baton.

It probably took me close to five minutes to realize that there was no normal explanation for what had happened.

I did exactly what I’m telling you not to do: I stopped on a road at night.

It was a spooky experience, but incredibly stupid as well.

Don’t be another “weird” statistic.

Since writing this, I’ve learned that there are an unusual number of car accidents in that area, and not just among ghost enthusiasts.

I’m not sure about that, but I can confirm that something taps on cars on Patterson Road.

Don’t try this yourself. Please, just take my word for it.

Or, park farther up the street.

Hike to a point where you can safely observe the bridge. And then, pay attention to cars passing over it, and any anomalies you notice.